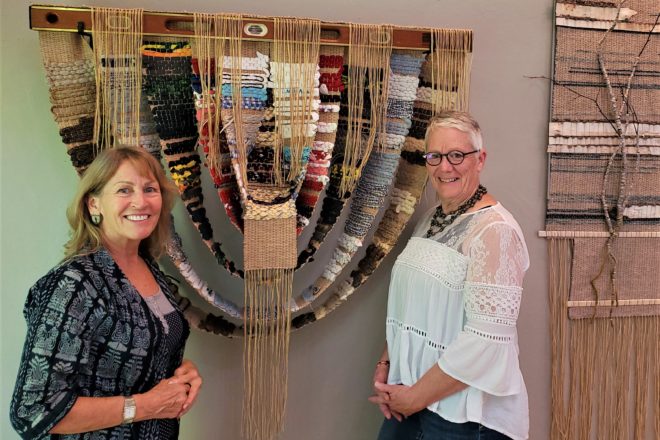 One day in December, as Jennifer Seydel sat in her living room and struggled to comprehend the tragedy that had radically changed the trajectory of her life, the name of a woman she had met only once popped into her head: Wendy Carpenter. Seydel and her husband, Mark, had met Carpenter briefly, years before, during a visit to Interfibers,  Carpenter’s studio. Both were enchanted by her intricately woven textile sculptures.

Seydel walked out of Interfibers that day feeling sure that not only would she and Mark one day own one of Carpenter’s sculptures, but that they already had the perfect place to hang it: right above the fireplace in the living room of their home.

After Seydel lost her husband to a sudden heart attack in October, life was turned entirely on its head. It wasn’t until December that she thought about Carpenter again.

“I remember looking at that big, blank space above the fireplace, and Wendy’s name popped into my head, so I pulled up her website and gave her a call,” Seydel said. “It was just a spur-of-the-moment thing, and as we started talking, she mentioned that she had done some memorial pieces. All of a sudden it just felt like the right thing: that I needed to do a memorial sculpture for Mark.”

Carpenter has been creating textile sculptures using handmade fiber material for more than 40 years. The process of selecting found material and then deciding how to weave small pieces of it into a whole sculpture is one that requires a partnership of careful deliberation and intuitive, creative decision-making. Recently, while working on memorial projects in partnership with clients such as Seydel, Carpenter has discovered that the artistic process that she has been fine-tuning for years translates perfectly to this kind of project.

First, clients provide found material that evokes the memory of the individual they would like to memorialize. Then Carpenter creates a sculpture that not only represents the deceased individual, but also incorporates the found material into an aesthetically cohesive whole.

When Seydel approached her in December, Carpenter had never worked with a client who was experiencing a loss that was as recent or as sudden as Seydel’s. Carpenter invited her to Door County to begin the first step of what would be an intense, yet fulfilling collaborative process.

Over the course of two days, Seydel introduced Carpenter to Mark through memories and his belongings. Amid tears and retellings of happy times, the two women worked together to develop a concept for Mark’s memorial sculpture.

“That period of time was really an eye opener for me,” Carpenter said. “I wasn’t quite expecting the emotional range that we both had to navigate.”

For Seydel, Carpenter’s abilities to listen, be present, and sit with her through waves of emotion solidified the women’s artistic and personal partnership. Seydel felt entirely at ease entrusting her late husband’s clothing to Carpenter, even though the process of choosing what to include and what to let go of was terribly difficult.

“Deciding what I was going to bring was a healing journey – another onion layer of the healing process,” Seydel said. “I went into his closet to decide what I was going to take, and I had no idea. Then, all of a sudden, I looked down, and his shoes were all there. I pulled all of his shoes out and put them in a line, and I was like, ‘Oh, my God, his shoes tell his story.’ So I pulled all the shoelaces out, and I went into the closet with each pair of shoelaces and picked an outfit. I showed up to Wendy’s with 10 outfits from all the different parts of his life.”

In addition to Mark’s clothing, Seydel chose to take a mahogany level that Mark had used in his woodshop.

“I knew we needed to use the level because Mark was just this even-keeled guy. He kept me grounded, but also, he kept me balanced and kept our lives balanced,” she said.

Carpenter cut the clothing into long, thin strips before beginning to weave them together on a loom. She then used the level as a structure from which to hang the panels of fabric woven from the clothing strips. The panels loop down from the level, creating a fluid and flowing form.

The sculpture now hangs in the home that Seydel had shared with Mark, in the place where they had both envisioned Carpenter’s work hanging one day. With its open structure and the flowing tassels layered on top of the woven panels, Carpenter’s sculpture is a beautiful testament to both Mark Seydel’s life and joy in Jennifer Seydel’s future.