Shortly after Bo Johnson was diagnosed with AML, he and his mother Annika began a journal on Caring Bridge and a Facebook Page, GO BO!, to keep people updated on his progress.

Through all their ups and downs, through every devastating setback, they’ve kept the blog updated, sharing incredibly personal details and emotions. 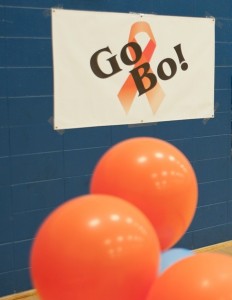 A sign in the Gibraltar High School gym at a fall, 2011 rally for Bo Johnson, who is fighting Extramedullary Acute Myeloid Leukemia.

Annika says the blog helped her deal with the trauma, but it also provided an invaluable service to the community, squelching rumors and providing an opportunity for Bo’s friends to express their concern.

Jim and Kathy Surges have two children in school at Gibraltar, a son Nathan, in eighth grade, and daughter Amanda, in sixth grade.

“We kept up every day,” she said. “So many times Jim and I have just looked at each other and we shake our heads. None of us can imagine ever losing our child. It is amazing what Annika has done. Look how much we’ve all learned in one year, how we are with our kids. It’s almost impossible to describe what she’s done for us.”

Surges said she’s met and developed relationships with many people through Bo’s fight.

“It has really brought so many people together,” she says.

Erin Erickson’s son Ernie is a good friend of Bo’s. 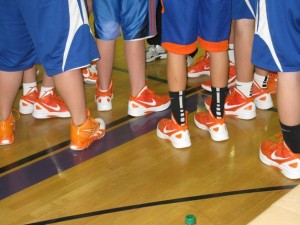 Bo’s basketball teammates don orange shoes to take his battle onto the court with him last winter. Photo by Kathy Surges.

“I worry about all these boys and how they’re going to react,” she said through tears outside the house where Bo and Ernie sat watching TV. “But what Annika has done, writing that blog and keeping everyone updated, has helped so much. I don’t know how she does it.”

“Death can be taboo,” he said. “They have given us the opportunity to talk about this, to reflect, to pray.”

Knutson said Bo and Annika’s very public journey has helped students and parents have difficult conversations. The community has shown its support in a very visible manner, which Knutson hopes sends a message not only to Bo, but to all of the children in the community.

“This shows our kids that our lives are special,” he says. “This experience has been a symbolic gesture to a young man, but also symbolic of the community. It’s all about those kids. We are better for Bo, and we are better because of Bo.”