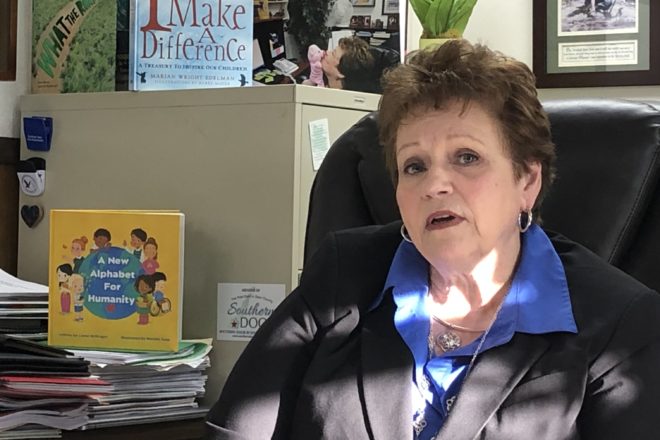 Children’s books fill shelves in front of Superintendent Patti Vickman’s desk, and inspirational messages line the walls behind the desk at the Southern Door Schools office. Photo by Craig Sterrett.

When Patti Vickman retires effective June 30 after a 45-year career, she’ll take with her a steadfast belief about public schools and their employees.

“Everyone’s role here is, they’re educators,” she said. “We’re all here for the kids.”

It was 7:40 on a Wednesday morning, and the Southern Door superintendent had just finished handing coffee and cinnamon rolls to each of the bus drivers. It’s one of her traditions for National Educator Appreciation Week – something she calls Staff Appreciation Week because of the role all employees play in helping to shape students, including teachers, administrators, administrative assistants, drivers, custodians and the school nurse.

Vickman started her career as a kindergarten and first grade teacher in Green Bay and Kentucky, worked her way into administrative leadership positions in Oshkosh and has served as superintendent since 2012 at Southern Door – two miles from the dairy farm where she grew up.

Some of the biggest changes she’s witnessed during her career have come at the end of it because of the coronavirus pandemic. During the past year, she’s administered the district’s firm decision to open the doors to students for in-person attendance. The district had begun providing computers to each student before the pandemic, which allowed for a quick transition to online learning for those students who participated in learning from home.

“We’ve been in school since Sept. 1,” Vickman said. “It’s been awesome. When school leaders nationwide were doing gating criteria, we decided to base our criteria on our school and how our kids and families were doing, rather than looking at Wisconsin or Door County statistics. That has really worked well for us.”

Vickman said she’s learned that it’s important for public-school leaders to make decisions that are best for their district.

“You really have to look at your own school community,” she said. “You have to see what their values are. You have to listen to get feedback from them often and incorporate it into your decisions.”

Southern Door staff reorganized using a number of safety measures and new materials to keep students and staff safe while Door County infection rates were high. Students also played a role in the success of the opening.

“They wanted to be able to have athletics and different events, and they knew we could do that if they followed protocols we put in place,” Vickman said.

The school had its first live concert in 500 days when the high school band and choral departments played May 3. Only two guests per student were allowed into the auditorium, but the show was available to all via livestream. Vickman received remarks from people as far away as the Pacific Northwest that they were glad to finally be able to see a live concert. After all they’d been through, Vickman called the concert one of the district’s “greatest moments.”

Some of the pandemic changes have been positive and could be incorporated on an ongoing basis, such as virtual parent-teacher conferences.

“I think some of those things are going to stick because it was a way for us to reach out in a different way,” Vickman said.

But some things will not stick. The district theoretically could demand that students learn from home on snow days in the future, but Vickman said she believes that snow days should be snow days – though she will not miss making the decision to cancel classes.

“Usually it means getting up at 4 o’clock, connecting with my maintenance and transportation director,” she said. “He’s talking to the county; I’m connecting with the Brown County superintendent, the Luxemburg-Casco superintendent and the Door County ones. And because my county is so wide, the weather can be completely different in Dyckesville – the district starts almost at Dyckesville – than it is in Sturgeon Bay.”

Teaching methods have changed over the course of Vickman’s career, and teachers no longer expect all students to learn in the same way.

“I think whether it’s society’s needs, or legislation that’s passed, or needs of the job market, schools have really had to become much more diversified in what education means,” Vickman said. “It’s really education of the whole child, so you’re dealing with their social-emotional growth; you’re dealing with mental-health issues. You’re preparing them not only to have good, strong foundations in academics, but you also are preparing them on how to apply what they have learned and to do it at a high level, to be critical thinkers and to be creative.”

The skills students need to navigate today’s world are different from when Vickman began her career, and teaching methods have adapted.

“The research is out there that in a typical student’s lifetime, their job could change 12 to 14 times, which is very different than what it was 60 years ago, so we have to prepare them to be adaptable, to be flexible and to be able to adjust with those different changes along the way,” she said.

As Vickman prepares to reclaim her time, she said she’ll have plenty to do with her two grandchildren and her numerous community commitments, including with the Brussels Lions Club and on boards for Door County United Way; Northeast Wisconsin and Door County Big Brothers, Big Sisters; Door County Medical Center; and Birch Creek Music Performance Center.

Vickman is helping to pave the path for the next superintendent, Christopher Peterson, who’s arriving in Brussels from Howards Grove. She’s scheduled four days in early spring for Peterson to meet students and staff at the school.