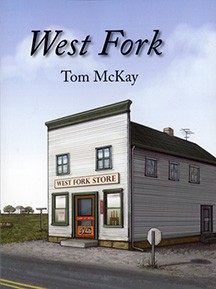 Young Mr. Blair is uncertain as he faces both his eager scholars and his unfamiliar rural community. Perhaps predictably he becomes a successful teacher and basketball coach, and an integral part of social fabric of the district. And along the way, he finds love.

But the story becomes elegiac as well, a narrative of loss. McKay selects particular days to dramatize his novella, beginning with Aug. 27, 1968 and ending on June 23, 1995. Over the 27-year time period, Blair’s achievements are diminished by the sense of loss as time passes. He sees his idyllic school closed because of consolidation, the basketball team he coaches a victim of that progress; farmers struggling but losing their land to mega-agricultural enterprises; the village of West Fork shrinking until it becomes unrecognizable. And his love is lost.

The Vietnam War is a backdrop for the story; the divisiveness that conflict created in the population of the entire country disrupts West Fork as well, and in a sense, the war becomes an abstract character in the narrative.

While McKay’s first person narrator makes the story seem a memoir, the tale is fiction. The author is a historian and museum consultant who, for more than two decades, worked as Coordinator of the Office of Local History at the State Historical Society of Wisconsin. Although his fictional character hails from Illinois, the protagonist’s adventures take him into Wisconsin.

Despite the empathetic personality of the Jim Blair character and the engaging aspect of his story, the tale is flawed in two respects. First, Blair is essentially an innocent Jesse Stuart (The Thread that Runs So True) schoolteacher character, but he casually relates rather graphically his intimate romantic adventures. But more unsettling, the plotline takes unexpected twists that require a substantial suspension of disbelief, allowing our hero at last to enjoy true love.

This reader enjoyed the book in part because he began his teaching career in 1966 at a small high school in a rural community. School consolidation, the disappearance of the small family farm, and the loss of a village’s role as community center are historical facts of life, as was the destructive impact of the Vietnam War. But the hopeful idealism of young teachers who, despite low pay and challenging working conditions, devote lives to students, remain an inspiration in our society.