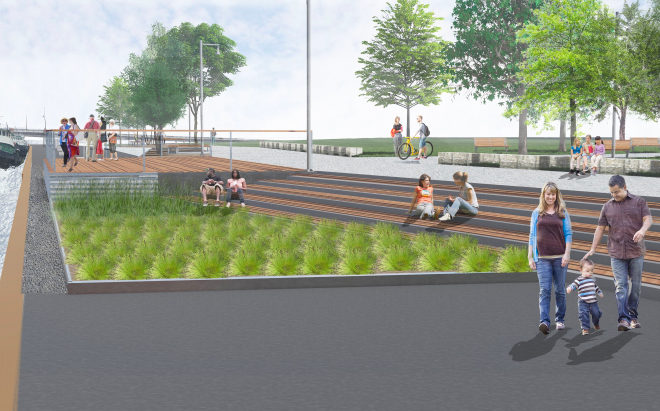 A working waterfront that provides public access will soon be more than just drawings on paper now that the Sturgeon Bay Common Council has selected a contractor to build the West Waterfront Promenade.

The plan retains the tugs along the waterfront while creating public access and viewing points, and providing a prominent connection among spurs of the public waterfront. The specifications included several requests for parts of the job that could be included or modified. None of those alternatives were selected, such as improvements on the central walkway or an extended completion date.

Award of the bid was also contingent upon approval from the Wisconsin Department of Natural Resources (DNR) on the city’s environmental remediation plan – an approval that was expected this week, City Administrator Josh VanLieshout said Tuesday evening.

Up to $447,841 in state stewardship grants may be applied to offset the project costs, despite those grants having been approved in 2015 and 2016.

“Normally, those would have expired, but because of the delays and the litigation, the DNR agreed to keep those open,” said Marty Olejniczak, Sturgeon Bay community development director. “We’re confident a good chunk, if not all of that money, can be applied.”

There’s also a match required by the city, and Olejniczak said the city is still working out the pricing. Another grant the city recently applied for through the Harbor Assistance Program Grant program for $249,960 may also be forthcoming to reduce the fiscal impact.

The estimated cost of the project prior to bidding had been $900,000.

Below-grade work is expected to begin this year, with the remainder to be completed in 2021.

The council also gave Mayor David Ward authority to finalize the submerged-lands lease between the city and the Board of Commissioners of Public Lands. The lease, which would cost the city $200 annually, became necessary once the ordinary high water mark was established in 2019 at 92 and 100 East Maple Street.

Without the lease, the city could not continue existing public navigation-related uses or relocating the former grain elevator as required by the development agreement with the Sturgeon Bay Historical Society Foundation (SBHSF). The lease allows the city to  put into motion the promenade’s public improvements and the subleases with the SBHSF and Sarter Marine Towing.

The final lease agreement was not available as of the council’s Tuesday meeting, but changes were expected to be minor and not materially alter any of the principal terms of the lease, VanLieshout said. Without allowing the mayor to authorize the final document, VanLieshout said the promenade project could have been slowed.