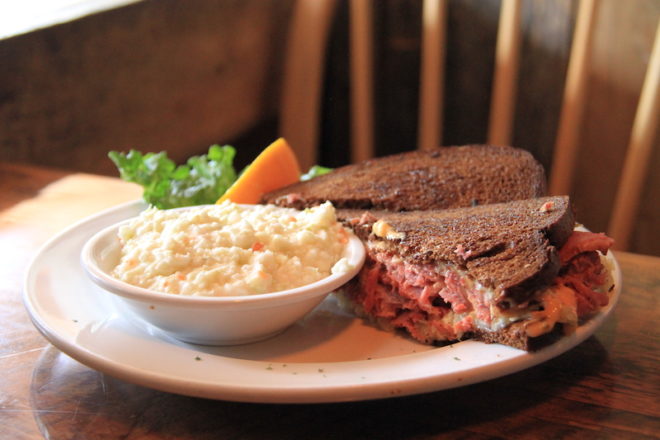 The Kangareuben with a side of slaw. Photo by Aleah Kidd.

The St. Patrick’s Day tradition of corned beef consumption has been popularized in North American culture – alongside other festive activities such as drinking green beer, hosting parades and dying a river green – but believe it or not, corned beef is not actually considered a national Irish dish.

Corned beef first came to be associated with the Irish-American culture because it was often used as a replacement for bacon in the popular traditional Irish meal of bacon and cabbage. This substitution became a celebration of Irish heritage in North America for St. Patty’s Day around the turn of the 20th century.

Today, with the arrival of the annual St. Patrick’s Day weekend, you can find variations of this meal around the peninsula in celebration of the Irish, but at the Coyote Roadhouse, every day is an occasion to enjoy a delicious corned beef sandwich. This is not just any corned beef sandwich, though – it’s the one and only Kangareuben.

The Kangareuben – named after nearby Kangaroo Lake – is the restaurant’s version of the famous reuben using corned beef, rye bread, Swiss cheese, sauerkraut and Thousand Island dressing. As one of the most popular menu items, this particularly tasty speciality sandwich is created using a specific process.

The sandwich starts with a salt-cured brisket cooked at a low temperature for six hours, giving the meat a tender texture. The meat is then sliced in a particular fashion: across the grain in ⅛-inch thicknesses. Sandwich assembly starts with two slices of buttered pumpernickel rye bread on a hot griddle, with Swiss cheese, Thousand Island dressing and sauerkraut warmed on one half and slices of corned beef on the other half. Once heated through, the sandwich is finished when the corned beef is topped with the other half and served alongside a choice of side dish.

French-fried onion rings are another not-to-be-missed Coyote Roadhouse favorite. This heaping pile of delicately sliced and fried onion strands is a combination of melt-in-your-mouth crumbly and crunchy. The “heaping loaf” order is truly a large number of onion strands, comparable in size to a loaf of bread. If your appetite isn’t that monstrous, a small loaf is available. The loaf comes with a serrated knife to saw off your own slices.

Add your choice of brew from the 10 tap lines or 30 bottled options, and you’ll be well on your way to a satiating meal worthy of St. Patrick’s Day celebrations or otherwise. If you’re sticking with the Irish theme, you’ll find Guinness and Smithwick’s on tap, as well as a variety of Irish whiskeys behind the bar. Mix a coffee with some Bailey’s for dessert, and give thanks to the luck o’ the Irish for such a delicious abundance of food and drink.

• Corned beef earned its name because the salt-curing process uses large kernels of salt, similar in size to corn kernels.

• Historically, the Irish didn’t eat much beef. They preferred to use cows for dairy products and slaughtered them only when the cows were no longer of use for milking.

• Astronaut John Young smuggled a corned beef sandwich aboard NASA’s Gemini 3 flight in 1965 as a joke, causing concern about the presence of crumbs possibly damaging equipment.

• Corned beef made the menu officially on a space flight in 1981 – a mission commanded by John Young.

• Corned beef grew in popularity due to meat rationing during the World Wars, and it has since been a staple of the MREs (Meal, Read-to-Eat) provided to soldiers in combat because it is nonperishable.