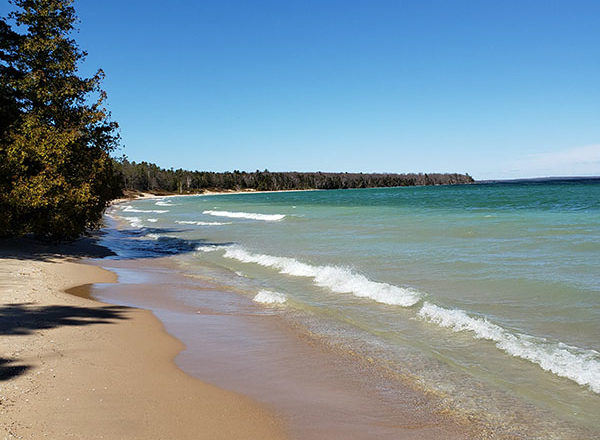 The picturesque shoreline of Europe Bay beach and dark skies of Newport State Park are cherished by those living on the remote northern tip of the peninsula, but the area was almost lost to private development during the 1970s.

The Hotz Gate on Europe Bay Road marks the spot where Ferdinand Hotz — once the largest private landowner in Door County — had a summer cottage on 170 sprawling, wooded acres from 1915 to 1978. The property included three miles of Lake Michigan shoreline to the east, and it overlooked Europe Lake to the west. In recent years Hotz’s grandson, Dr. G. Leonard Apfelbach, worked with the Newport Wilderness Society to restore the gate.

But during the late 1970s Apfelbach — a urologist in Janesville, Wisconsin, for more than 30 years — and his family were struggling to decide what to do with the parcel.  According to Hotz’s great grandson Paul Apfelbach, the land had been transferred by trust to Ferdinand Hotz’s four children, Alice Hotz Apfelbach, Ferdinand Hotz Jr., Margaret Hotz Klok, and Helen Hotz Schmid. At one point, they had it plotted out for private homes, but the oil crisis and high interest rates of the late 1970s made it a poor time to sell land in one of the most remote areas of the Midwest. Hotz’s four children and their children: Leonard, Mary Klok Uhl, Art Klok, and Henry Apfelbach were instrumental in the decision to protect the land in its natural state, true to the ethic of Ferdinand.

So in 1978, the Apfelbachs sold the land to the Department of Natural Resources and the people of Wisconsin for $700,000, stipulating that the land had to remain undeveloped. In total, the Hotz family sold almost 1,500 acres to the state for Newport State Park — Wisconsin’s only wilderness state park — including more than 10 miles of shoreline.

Today the gate is the entrance to the Hotz Trail and more than seven miles of gorgeous hiking, biking and ski trails, along which are three of Newport State Park’s rustic campsites. It’s also home to one of the county’s great beach walks, a town park and some of the best dark-sky viewing east of the Mississippi. It’s the first state park in Wisconsin to be designated by the International Dark-Sky Association as an International Dark Sky Park — one of just 48 such parks worldwide.

G. Leonard Apfelbach died June 25, 2020 — before the restored Hotz Gate could be formally dedicated, but knowing that it would welcome generations of Wisconsinites to a most fortunately preserved piece of paradise.