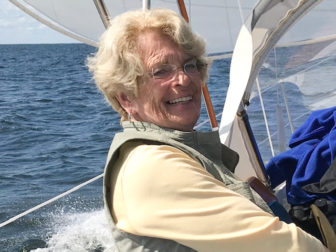 “This article is part of Outbreak Wisconsin, a series co-produced by WPR and Wisconsin Watch which chronicles people’s journeys through the coronavirus crisis.”

Last summer, Beverly Blietz spent her spare time driving for Uber in Door County. She shuttled visitors among hotels, campgrounds, bars and restaurants, and she said she absolutely loved talking to people while driving them around. At the time, she was 84.

She described her Uber experience in a text message as “SO MUCH FUN!!”

This summer looks markedly different for Blietz, who unexpectedly found her movements restricted because of her age, the coronavirus and the rules of her independent-living facility in Sister Bay.

Blietz, now 85, moved into an independent-living apartment at Good Samaritan Society–Scandia Village in November 2018 to be close to her husband, Bruce, who had been admitted to the skilled nursing facility that May for around-the-clock care. The switch from their four-bedroom house on 12 acres to a 680-foot “compartment,” as she calls it, was a huge lifestyle change. Her husband died last year. They had been married for 65 years.

She said the adjustment to widowhood and senior living was hard, but because she could still drive and was living in an independent unit, she still felt as though she had her freedom.

When the pandemic arrived, that all changed.

“I learned for the first time that my so-called ‘independent-living arrangement’ is indeed governed by nursing home rules,” Blietz said. “I’m not only quarantined, but my environment is completely locked down, and the freedom I’d hoped and planned for was not to be.”

Since the pandemic hit, isolation has set in. All group activities and meals have been canceled, and visitation is restricted to “essential” visitors. There are daily health screenings for all residents and employees. No more running out for errands: Groceries and prescriptions are picked up by volunteers and delivered to residents’ doors. For those who can’t drive, there is no way to leave.

The restrictions remain in place even though Wisconsin’s Safer at Home order has been lifted. The rules have been particularly challenging for Blietz, who is used to a lot of human contact, including with her son and daughter, who both live in neighboring towns.

“I’m a hugger,” she said. “I hug trees, animals, strangers. And, I tell people I love them because loving others is something that makes me feel loved.”

Blietz understands the restrictions and said she greatly appreciates the staff at Scandia Village. Still, she thinks about how many years she has left and how much the lockdown has diminished her quality of life.

“While I’m realizing that life will never be the same for anyone, I worry about how many days remain for me on earth, and I grieve for the time that’s being wasted and my opportunities that are lost.”

She battles mood swings. Sometimes she has trouble sleeping. She said it’s hard not having something to look forward to.

“At the outset, my resentment knew no bounds, even as I’m aware of why. The leash just doesn’t fit. I keep telling my adult children that while we don’t have control over the virus, we do have control over our attitude toward our circumstances.

“I practice what I preach. Getting control of myself and my disappointment is very challenging. And I’m really tired of reminding myself to act like a grownup.”

Confined to her apartment since mid-March, Blietz grew increasingly depressed.

Unable to visit with her son or daughter, Blietz said she began to reconsider her living arrangement, even taking to looking through local rental ads to see whether there was a new place where she could move.

“What if this is to be my last summer on earth?” Blietz wondered. “Because if it is, should I be making decisions to redirect the life I have left? I’m safe and virus free, but at what cost?”

In addition to her own feelings of extreme loneliness, Blietz reports that other residents of Good Samaritan–Scandia Village are “despondent and desperate for conversation with a friendly face.”

She questions whether the lockdown procedures, although designed to keep the elderly population safe, are ultimately worth the cost.

“In the future, will we look back on these days as irreparably damaging to an aging population?” she asked. “Will we better understand or even accept the brutality of isolation?”

Making the situation particularly painful, Blietz’s son-in-law, Mike Martin, 64, is a resident of the memory-care center at the same facility. Blietz can see his building across the parking lot from her patio. Prior to the pandemic, her daughter Paige used to visit him regularly, but now she has not seen him in three and a half months.

Blietz recalls that when Paige would visit Mike, she would end each visit by telling him she loves him, and that she would always come back. “Can he understand what has happened to their world, and can he ever know why she hasn’t returned?” Blietz said.

In mid-June, Paige invited Blietz to move into her condo in Ellison Bay. Initially reluctant to impose on her daughter, Blietz ultimately took her up on the offer. Still, her freedom is limited. Although Blietz is no longer subject to nursing home rules, she must still stay close to home and distant from her extended family.

“I realize that my lifestyle will not change with the new landscape. I am, and will continue to long for the habits that brought me joy, but now I’m fearful of people I know and love, of places harboring potential pandemic and of things I cannot see.”

At the end of June, settled into her daughter’s guest room, Blietz recalled waking from a favorite dream: “I was flying my airplane in the cockpit alone, taxiing out to the run-up pad, then, without a sound, cleared for takeoff. Throttle forward, the surge of power, accelerating. It took me back 40 years to my first solo flight, and that heart-skipping moment of liftoff. Breaking the bonds of earth, and free again.”

Her stay with her daughter won’t be forever, though. Blietz has signed a lease in a different apartment complex in the area, and she will be moving into her own place at the end of July.

Coburn Dukehart is the Madison-based digital and multimedia director of the nonprofit Wisconsin Center for Investigative Journalism (wisconsinwatch.org), which collaborates with Wisconsin Public Radio, PBS Wisconsin, other news media and the UW-Madison School of Journalism and Mass Communication. Reach her at [email protected]