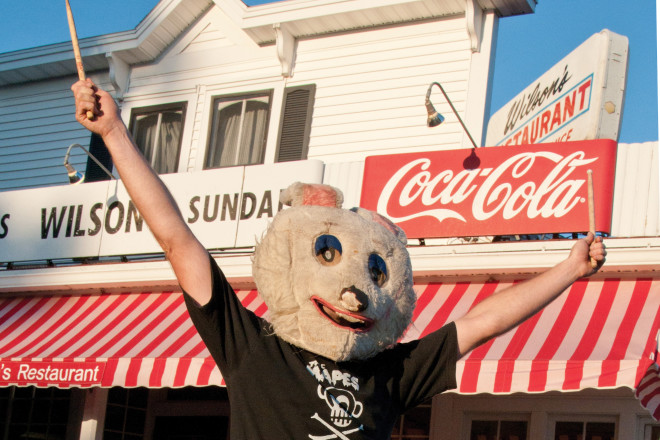 Here’s reason number 764 that Door County is one of America’s truly unique places – the following sentence will make sense to most residents of Northern Door:  “Yeah, so I was at JJ’s last night and the Rhythm Chicken showed up and played a set right next to my table.”

Reason 765? The response is usually something along the lines of, “Ha, yeah, that happened to me once at [insert restaurant, patio, beach, bathroom here].”

Since he first sprung out of his hole in 1999, the Rhythm Chicken has played 657 “gigs” around the world, most of them in Door County – nearly all of them unrequested. In that time his filthy furred head has been woven into the fabric of the peninsula’s eccentricities, one of the few remnants in a long line of odd characters and jokes that color the personality of a place a step removed from the rest of the world.

It’s a good thing too, for somewhere along the line Door County edged too far toward normal. Maybe the dollar figures grew too large. Maybe the houses became too pretty. Maybe things just changed. 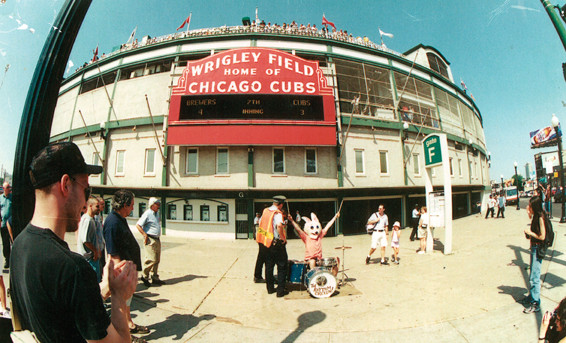 Some venues are more welcoming to the Chicken than others. Here some “fans” approach him outside Wrigley Field in Chicago.

But little by little, much of the crazy, the silly, the borderline insulting touches that gave the peninsula its rough edges and dirty secrets slipped away into the same memories as the beer league softball teams and waiting lists for bowling leagues.

You can catch the stories if you hit certain gas stations at the right time, or get the right combination of old-timers, boxed wine, and old-fashioneds together – then the old grudges, pranks, and stunts slip off of normally bitten tongues. But few today measure up to personalities who populated a much more rustic version of the Door – your Freddie Ks, Chief Oshkoshes and their brethren. 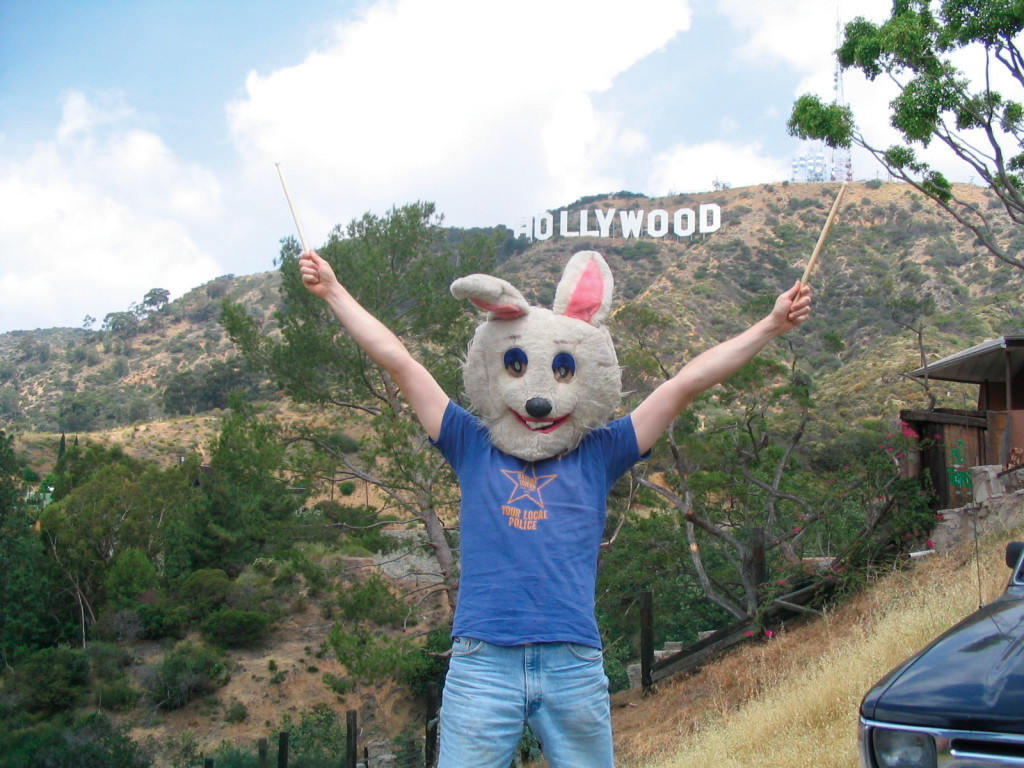 Rocking the Hollywood Hills like no other. Photo by Todd Taylor.

But there is one man carrying on the tradition, one man challenging the sensibilities of the staid, the uptight, the dull. One man that leaves visitors asking, “What the ….?”

And he does it from a perch on a stool behind a battered old drum kit.

The first time I saw him, it was through the window of the kitchen where I was slinging pizza pies. It was the summer of 1999. My brother, a couple friends and I owned a restaurant in downtown Sister Bay, and our patio out front was packed with diners. Then I heard the first faint sounds of a drumbeat.

I looked up to see a patio of diners in stunned silence, their faces bearing that odd combination of a half-smile and a “What the cluck?” look.

Then I saw what they were staring at. Planted on the sidewalk across the street was a rabbit, er, man – A Rab-Man? – wailing on a drum kit, his big ears flopping with the beat. He bullied that kit – I say that in a good way, he actually knew what he was doing – for 45 seconds or so before abruptly stopping and throwing his arms into the air in a V.

And there was silence.

Then the steady beat of the kick drum returned as this Rab-Man turned slowly on his stool from side to side, basking in the moment. Diners sat puzzled. In the kitchen we laughed, gingerly, wondering if this was some kind of a joke on us.

Then he wailed again – beating the crap out of his kit, walloping his snares as if he were holding hammers, not drumsticks. Shoppers were now stepping out of Passtimes bookstore and the Walkway Shops, and diners were gawking form the Sister Bay Bowl and Husby’s. This time when he stopped and raised his arms, a huge cheer rose from the onlookers.

The Rab-Man wailed some more, the crowd cheered louder.

That was my first dose of the Rhythm Chicken.

So, um, why is he called a chicken if he wears a rabbit head?

“But, I thought you said he wore a rabbit head?” you ask.

He did. It doesn’t make sense, I know.

But Rhythm Chicken doesn’t give a cluck. “People ask me that all the time,” he tells me between sips of Hamm’s in a February phone interview. “It’s really a simple story.”

He had been a drummer for a punk rock band in the early ‘90s. After they broke up he needed an outlet but didn’t want the drama of another band. The solution – be his own band, and play his own “venues” by his own rules, or lack thereof.

He came up with the name, Rhythm Chicken (“it just sounded like a great name for a street performer”) and thought he’d grab a chicken head and play. He painted the name on his bass drum, but couldn’t find a chicken head, so he stole a rabbit head from a costume laying around the Wagon Trail Resort, where he worked, and decided the name was going to stay.

“He’s a lazy bum,” says one of the Rhythm Chicken’s best, and only, friends, Paul Wanish.

The Rhythm Chicken’s act is simple – it starts with a rapid-fire set-up of his simple drum kit. He might show up on an empty street corner, a crowded bar, or a rural roadside.

In nearly 14 years of disturbing the peace, of playing in women’s restrooms, crowded bars, quiet parks, and busy street corners, you’d think that the Rhythm Chicken would have taken a couple of punches by now. Someone, some bro or some over-muscled bouncer should have tossed him by now, but it’s never happened.

Fair point. But Mr. Chicken has taken some abuse. I once tried to help him sneak into the Sister Bay Bowl to play a set on a Saturday night. Mike Daubner, the bar manager and my boss at the time, wasn’t having it. (The Chicken has played there many times before, but Mike seemed to take issue with an appearance while a television crew was filming. Go figure.)

He had a more serious run-in outside Hum’s Liquor store in Minneapolis when a man in an upstairs apartment didn’t appreciate his beat and threatened to dump a bucket of water on him if he continued. 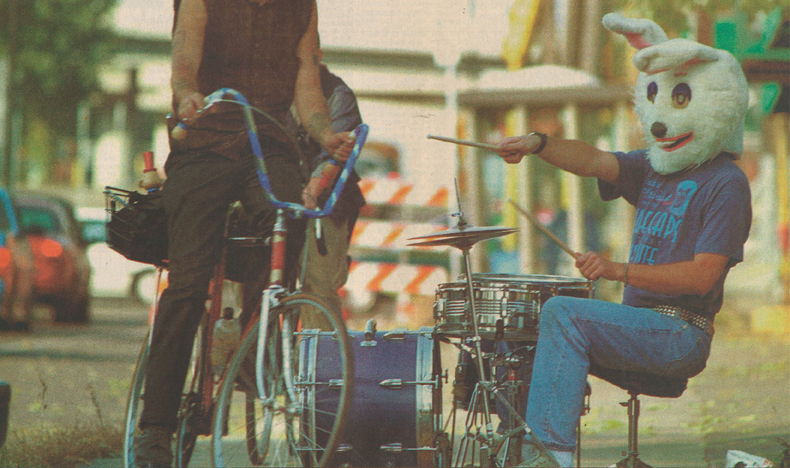 The Chicken played a few quick beats, then hopped away.

But by far the greatest threat to the reign of the Rhythm Chicken came from a Sister Bay innkeeper. The Rhythm Chicken had set up shop on the highway, not far from Husby’s Food and Spirits (where I was working behind the bar). He wailed away, luring the crowd out of the bar and the innkeeper from his living room.

“This old guy comes storming down the street,” the Rhythm Chicken recalled. “He points his finger at me and says – and he’s very upset – he says, ‘Now you listen here Rhythm Chicken. If I hear one more beat I’m calling the cops.’ 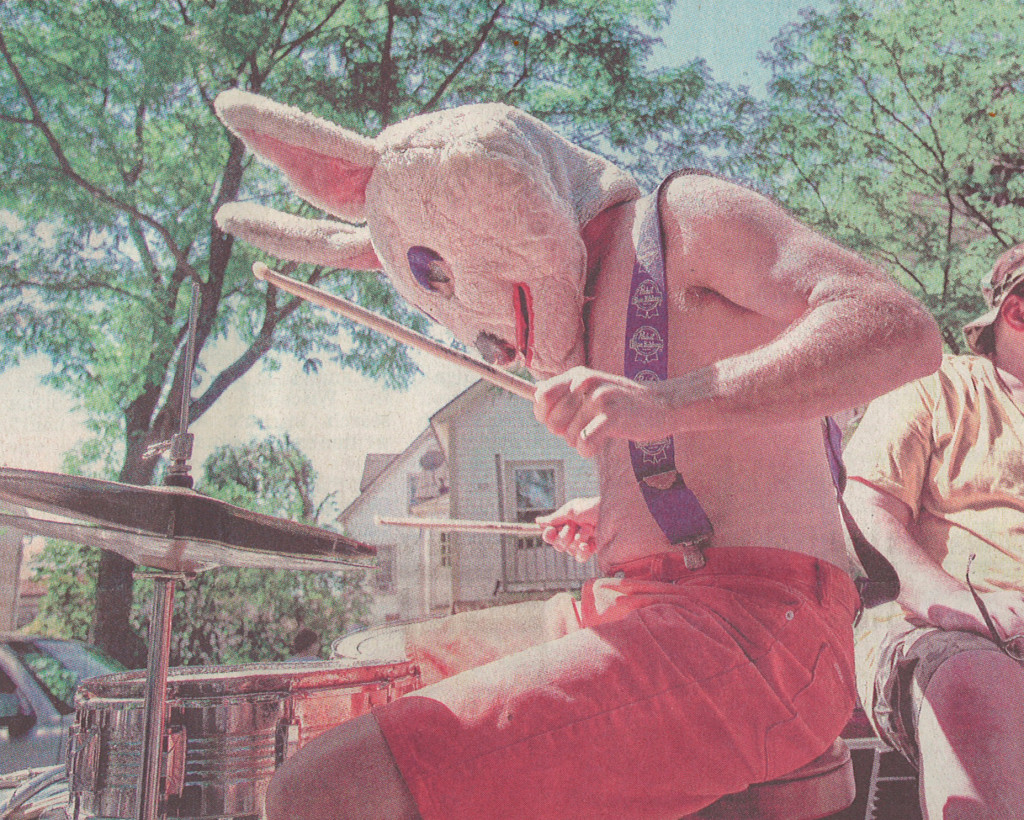 It’s not a parade if it doesn’t include the Rhythm Chicken. Without him, it’s just traffic. At the South Shore Parade in Milwaukee. Photo by Michael Sears.

“He sort of lost all of his authority when he actually addressed me as Rhythm Chicken.”

The Rhythm Chicken played a final set, packed his kit, and disappeared.

No venue too absurd

The Rhythm Chicken has played nearly everywhere you can imagine. His first “gig” was outside the Speakeasy in Green Bay on Washington Street in 1999. He’s played all the Northern Door staple bars. He’s played on Horseshoe Island, on pontoon boats floating in Eagle Harbor, at weddings and in dozens upon dozens of parades.

Google “Rhythm Chicken” and you’ll find an absurd number of YouTube videos, articles, and photos of him. It’s quite possible that his photo has appeared in print more than any other Door County face over the last 14 years, including several appearances on the cover of the Peninsula Pulse newspaper. 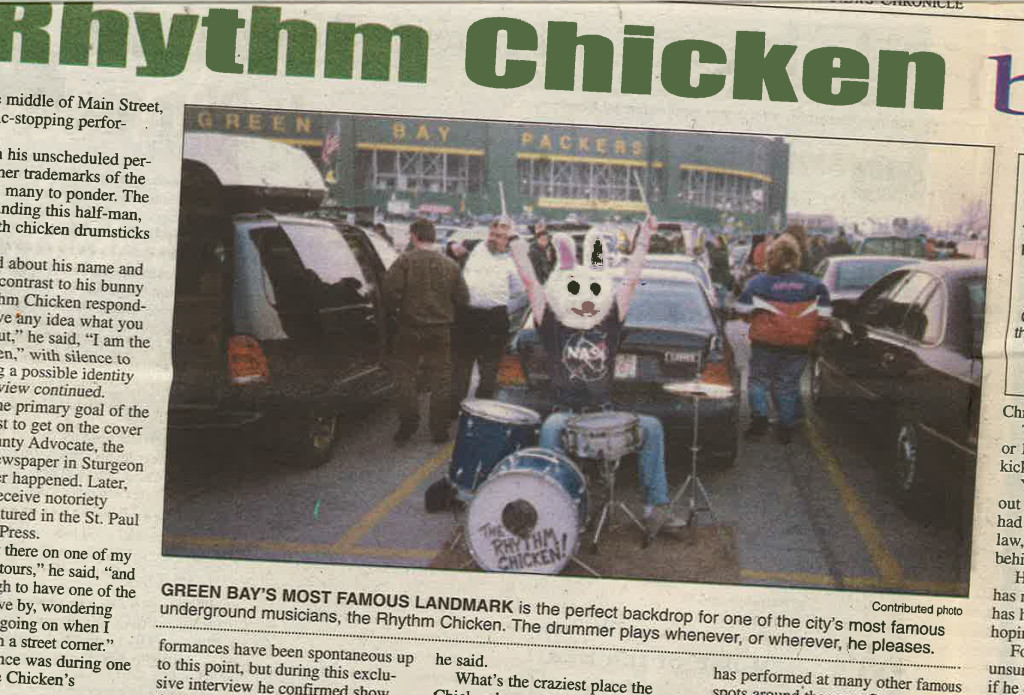 He’s penned columns for Razorcake magazine and been interviewed for many other articles.

The Rhythm Chicken has appeared in New York, at the finish line of a Mardis Gras run at the Railroad Pass Casino in Las Vegas, on the Hollywood Walk of Fame, and all over Milwaukee. He played in the kitchen of a small greasy diner and once played to an ecstatic crowd as he floated down the Elbe River in Dresden, Germany.

The Lambeau tailgaters love him (though he’s never played inside the hallowed gates) and the Milwaukee Brewers actually hired him back in their less-glorious days of the early 2000s. Yes, for enough beer money to snare a few cases of Hamm’s, the Rhythm Chicken became “The Rally Rabbit” for a time, the highlight of many bad Brewers games. 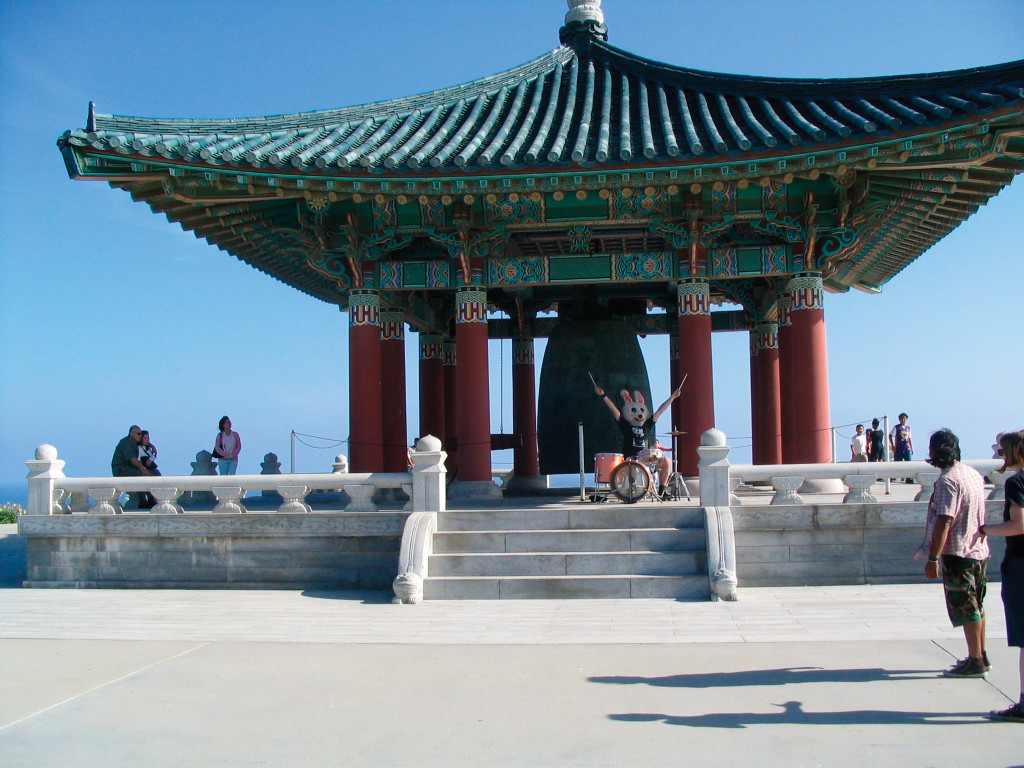 “I don’t watch much baseball,” he says, “but a guy from the Brewers saw me in the South Shore Frolics parade in Milwaukee and decided to ask me to play at Miller Park during the seventh inning stretch.”

The Rhythm Chicken’s favorite place to play, however, is far less glamorous.

“He loves to play in the women’s bathroom,” Wanish says. “I know, it’s weird…Really weird.”

This chicken also has visions of going where no chicken has gone before, to Door County’s most hallowed ground.

“I’d like to play on the roof of Al Johnson’s one day,” he says, wistful. “Up on the grass, surrounded by the goats, playing live on the goat cam, that would be cool.”

The Rhythm Chicken by the Numbers

657
Total number of appearances by the Rhythm Chicken

3,820
Number of results you get when Googling “Rhythm Chicken” 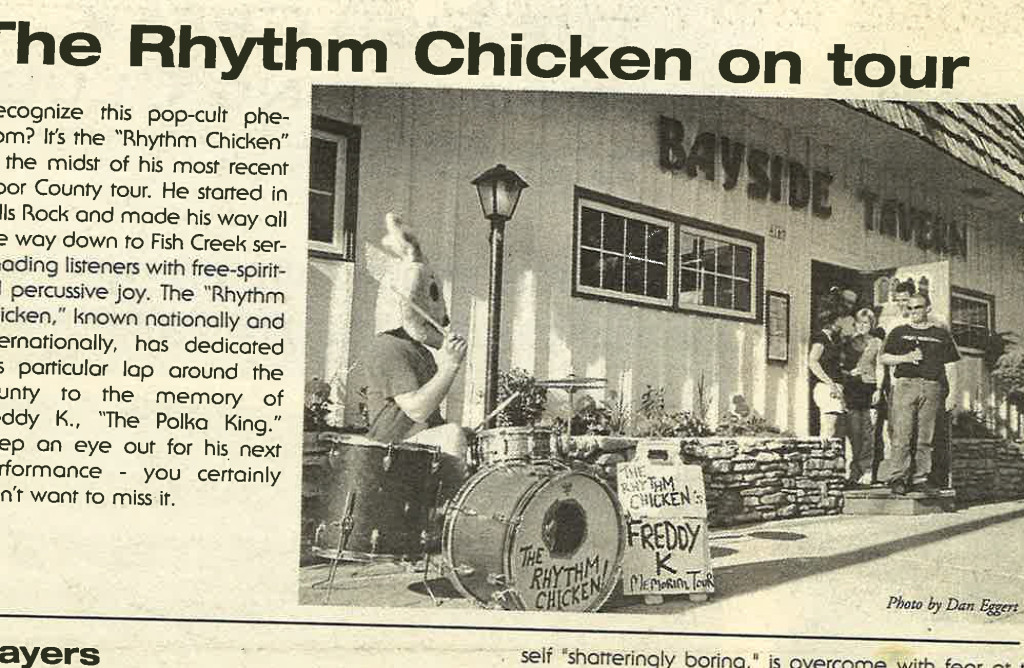