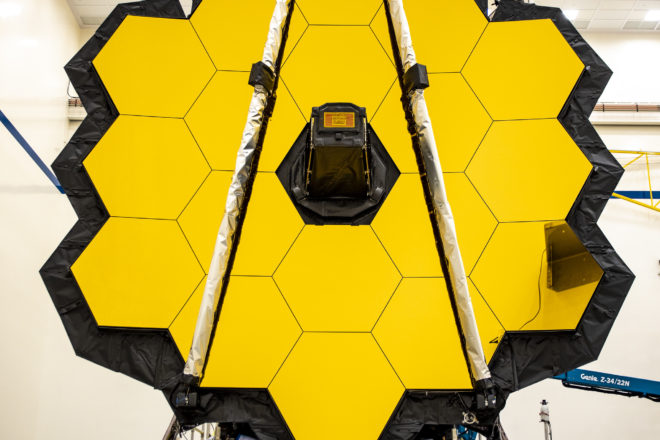 The James Webb Space Telescope is scheduled to launch Christmas Day, right about the same time many of us will be opening presents from under the tree.

Earlier this month Myles Dannhausen Jr. talked to one of the world’s leading astronomers to find out what the JWST will do for astronomy, science, and our understanding of the Universe.

Dr. Heidi Hammel is the Vice President for Science at the Association of Universities for Research in Astronomy, a consortium of 47 US institutions and international affiliates that operates observatories for NASA.

The following is a condensed and edited version of the interview that first aired on the Door County Pulse Podcast. To hear the full conversation, listen at the link below.

Myles Dannhausen Jr. (MD): This has to be an incredibly nerve-wracking time for you as we’re eight days from the launch of a $10 billion telescope. How are you feeling?

Dr. Heidi Hammel (HH): Yeah, it’s a very nerve-wracking time for us. I’ve been working on this project for over 20 years now. To now have it be real, a real telescope on a launch pad in French Guiana about to go off into space on a huge rocket – there are so many feelings that go along with that.

This telescope is going to be able to take infrared photos of the cosmos. The Hubble focuses mainly on visible light, like we see with our eyes. James Webb is going to open up whole new fields of science. One of the key goals of this telescope is to see the very first galaxies ever formed in our universe and we know that those galaxies emit light at red wavelengths.

It’s going to do so much other science as well. It’s going to look at how galaxies evolve, it will study planets around other stars, study atmospheres to see if those planets to see if they might be amenable to life.

It will also study planets in our solar system. That’s my particular field of research. And that’s why the whole community is excited about this telescope. It will do so many things.

MD: What did we learn from Hubble?

HH: Hubble has rewritten the books on astronomy. It’s key goal was to figure out the size of the universe. By studying distant galaxies and looking at exploding stars in distant galaxies. It also was used to study stars in other galaxies. It has taken the first steps to understand planets around other stars. My first program with Hubble was in 1994 when a comet was discovered on a collision course with Jupiter. I got to watch Jupiter as the fragments of this comet crashed into the planet and left massive explosions that lasted for months. That was all possible because of Hubble.

MD: What is different about the James Webb compared to Hubble?

HH: When Hubble was launched astronauts serviced Hubble five times. With Webb we won’t be able to do that. We can’t send astronauts to where it will be in space. Hubble was a single piece of glass. The Webb is designed as 18 different segments of glass that work as one telescope. Those can be adjusted by us to make it exactly the right shape.

That will take some time. We will not get images right away. It will take a full month for it to travel to where it will be placed. Four times the distance from the earth to the moon. We can’t send astronauts there.

Then it takes a full two months to line up all those mirrors so they’re perfectly in focus, and a couple months after that to get all the instruments in order. Probably July of next year that we get our first pictures back from Webb.

This project, being lead by NASA with contribution  from European Space Agency and the Canadian Space Agency, to me, is really an example of what we can do when we all work together to really do something unique and amazing.

MD: Are you most nervous or worried about anything in particular?

HH: This is rocket science, and it’s hard. We are putting our $10 billion telescope on the top of a giant rocket. And we’re lighting the fuse  and sending the rocket up into space. That’s scary. It just is. But I have the greatest confidence in the Ariane V rocket, but you’re still nervous. And the telescope is a very unusual and complex piece of engineering. There’s something like 344 unique things that have to happen to get this telescope unfolded. We worry, but we’ve been worrying about this for 20 years. We’ve been tasting and retesting and baking and freezing the telescope. We’ve tried to think of everything that could possibly go wrong so we are ready for it. Of course I’m nervous, but I’m really confident we’ve done everything humanly possible to get this ready to go and ready to do science.

MD: What is it like to work on something of this scope, for so long?

HH: Well, we really started thinking about this before Hubble even launched because you have to. It takes so long for something like this to come together. And years before that scientists had started to think about the Hubble, and eventually I got the opportunity to look into the cosmos with the Hubble. So I had to pay it forward for the next generation of scientists and astronomers. I have been awarded 1,000 hours on the James Webb, and I have identified dozens of young scientists to take my time on the telescope to do new research. I love that I can enable the next generation to have an opportunity like this.

We’ve already started talking about the next thing after Webb. I probably won’t be around to see that one, but maybe. And Maybe we’ll get together and talk again in 20 years.

MD: Is there anything else we should know about the James Webb that we haven’t touched on?

HH: Well, it’s not exactly about the Webb, but I want to say thanks to all the people fighting to protect the dark sky in Door County. It is so important and so inspiring that people care. I became an astronomer because I used to look out the window of my parent’s car and look at the stars and try to find the constellations and I was filled with wonder. So thanks to everyone working to keep the dark sky dark so the next person can be inspired.

The James Webb Space Telescope is scheduled to launch Christmas Day at 6:20 am central time. Find out how to watch here>>