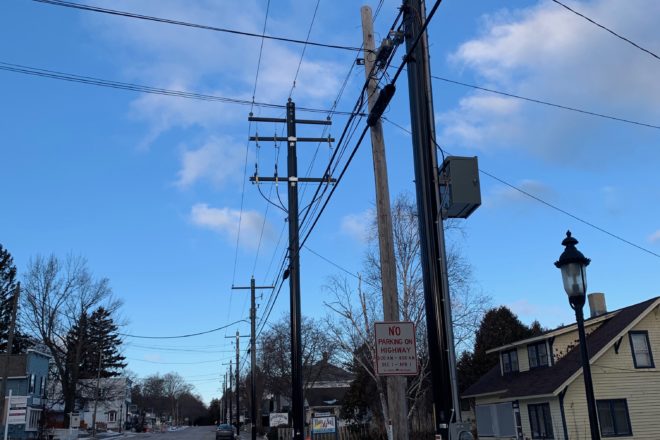 The black power poles in Fish Creek don’t require guy wires for stabilization, but are much taller and noticeable than wooden poles. Egg Harbor is debating whether to install the poles downtown or bury utilities. Photo by Myles Dannhausen Jr.

Fish Creek residents were surprised last summer when towering, black utility poles replaced the wooden poles throughout the village. Now Baileys Harbor is in line to get a few of the poles as well.

According to Matthew Cullen, spokesperson for Wisconsin Public Service, the black, fiberglass poles are used to minimize the space needed for the pole and to minimize its impact on nearby property owners.

“The black utility poles you reference typically do not need extra equipment, such as guy wires or anchors, to secure them to the ground,” he said. “These poles also can be installed in areas where space is limited.”

He said that when installing or replacing utility poles, the priority is to use existing road rights-of-way or land easements.

The pole replacement is part of a years-long project to upgrade the utility’s distribution system and equipment.

“Installing the new poles will strengthen our distribution system by providing better support for the power lines and other equipment attached to them,” Cullen said.

In some areas, old poles remain in place next to new poles, but Cullen said that will likely change over time. WPS moves only its own lines, but it works with other telecommunications providers to transfer their lines, such as fiber-optic cable, from the previous utility pole to the new pole.

“Once equipment and facilities have been transferred or removed from the previous utility pole, the company that owns the pole is responsible for removing it,” he said. “WPS will be removing the previous poles it owns in the area once they are no longer in use. However, we do not have control over removing utility poles owned by telecommunications providers.”

Spectrum Communications, which provides cable television and internet services, has completed more than 500 pole transfers during the last two years.

WPS is also continuing tree-trimming in northern Door County to reduce the potential for trees to cause electrical outages. The policy, depending on the tree species, is to trim the tree so that there is a space of six to 10 feet around primary lines. Limbs that overhang, lie on or pull on any of the lines are trimmed as well.

In Egg Harbor, officials have voiced support for burying power lines through downtown when the highway is reconstructed in 2023, eliminating the need for new poles and tree trimming throughout the village. That project has an estimated cost of $2.2 million.