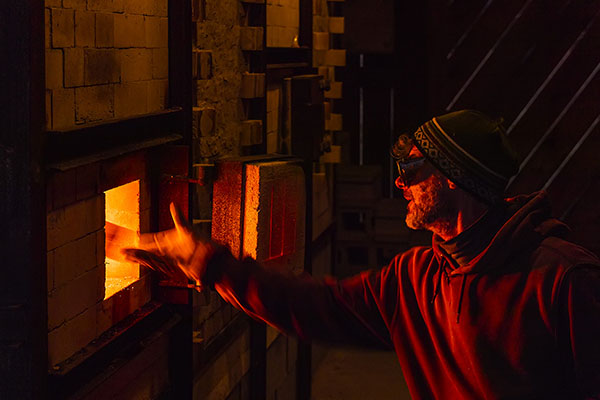 In few places on Earth do the four classical elements of nature — earth, air, water and fire — collide in as beautiful, indestructible and spectacular a form as in a potter’s studio. Only there can a human manipulate the elements into forms that serve, as the late British studio potter Bernard Leach asserted, “the most faithful bearer of man’s message.”

Leach’s 1940 treatise, A Potter’s Book, lauds “slabs of pottery” as unbreakable messengers — throughout the millennia — of humankind’s work. The discovery of pottery fragments around the world has given archaeologists insights into the emergence of agriculture, socioeconomic change and human development 20,000 years ago. (That’s the approximate age of the world’s oldest known pottery, discovered in southern China in 2009.)

For those less interested in what slabs of old pottery can tell us about the hunter-gatherer societies of southeast Asia during the last ice age, Leach also spoke to clay’s ability to showcase the fusion of the “individual character and culture of the potter with the nature of his materials.” Indeed, the message pottery carries with it can be as individualistic as it is collective.

Though not always obvious to the untrained eye, the process by which potters choose to literally solidify their work — that is, fire it — can tell a lot about their artistic motivations and preferences.

From honoring the Zen-steeped traditions of ancient Japanese raku to making use of today’s fast, energy-efficient electric kilns, Door County’s potters are turning up the heat in ways old and new to turn out an array of beautifully diverse pieces.

The draw of the primitive holds appeal for potter Tony Gebauer of TR Pottery in Fish Creek. For nearly two decades, he has been a student and practitioner of wood firing, a traditional process dating back to fifth-century Korea that uses firewood as fuel. At that time, it was the high-fire answer to a low-fire problem: bonfires and pit fires peaked at 700 degrees Fahrenheit.

Gebauer owns two wood-fired kilns, both of which can handle temperatures of around 2,300 degrees. The first is a traditional anagama: a long, tube-shaped kiln built partially into the ground with an upward-sloping floor that ends in a chimney. The second is a noborigama: a two-chambered catenary-arch kiln that is essentially a more efficient version of an anagama.

Both are works of art in themselves, but it is the anagama that demands a special type of physicality and mentality from those who work it. The anagama takes a crew of three — working around the clock for three to five days straight — to operate. When filled, it holds upwards of 800 pieces of pottery.

“Once you light it, you have to be with it,” Gebauer said. “It’s a big chamber, and there’s a lot of mass in there to heat up. It takes a lot of fuel and energy to keep all that hot, so you’ve got to keep putting wood in it. The stoking cycle is a pretty good armload of wood — seven, eight, nine pieces at a time. Early on in the firing, for the first couple days, you’re putting them in probably every five minutes.”

The fire is lit at the front of the kiln and travels backward toward the chimney. In the process, it snakes through everything in its way and creates unpredictable textures and patterns on the artwork.

“If you think of the flame as water moving through a stream and the pots are the rocks in the stream, [then] every time you put a rock in, it’s going to change the course of the water,” Gebauer said. “Everything that you put in there not only affects the one that you set, but it also affects the things that are next to it on either side [and] the things behind it, so when we’re loading it, we’re trying to think about all of that.”

The prolonged heat — at nearly 2,300 degrees over the span of four to five days — and the almost constant feeding of wood into the flame creates fly ash, the key ingredient in wood-fired pottery’s telltale subtle gloss and rich color.

“The ash is a natural glaze,” Gebauer said. “So if you take wood ashes and you get them hot enough, they’ll melt, and they’ll make a glass, and that’s what ceramic glazes are. It’s just a really thin, glass coating on a piece of clay.”

A current within the kiln creates a light dusting of ash on the pieces, which is especially noticeable on forms with shoulders and on the sides of flame-facing pieces. Particularly ashy pots will emerge with earthy-colored rivulets of glaze running down them.

Gebauer acknowledged that his wood-fired pieces aren’t the flashiest things lining the shelves at TR Pottery, but they do draw the admiration of art lovers who have an appreciation for nature and the subtleties of firing pottery. To Gebauer, these pieces honor boyhood memories of stoking fires and stacking wood and his love for the challenge of this stripped-down process.

“The prospect of being able to make something in a way that just seems so natural — that was what I was really interested in, and once I started to actually see the pots, then I was even more interested in it,” he said. “It kind of goes back to the challenges of firing this way: so much of what you get as far as how the pots look happens because of how you put the pots in, how you load the kiln. For this type of firing, 75 percent of the success of a pot is where you put it and what goes around it.”

Happiness in the Accident 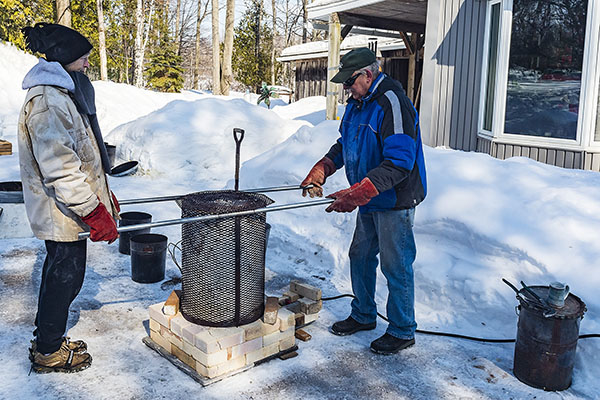 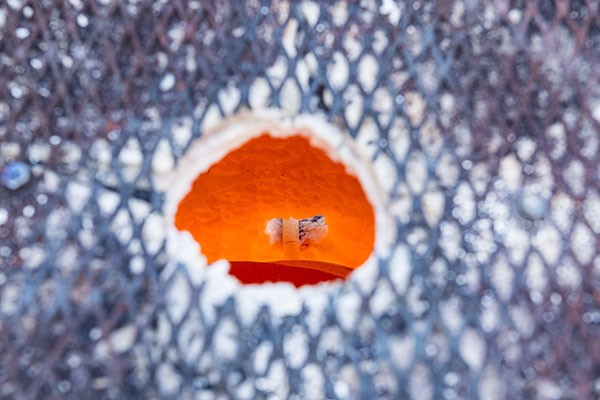 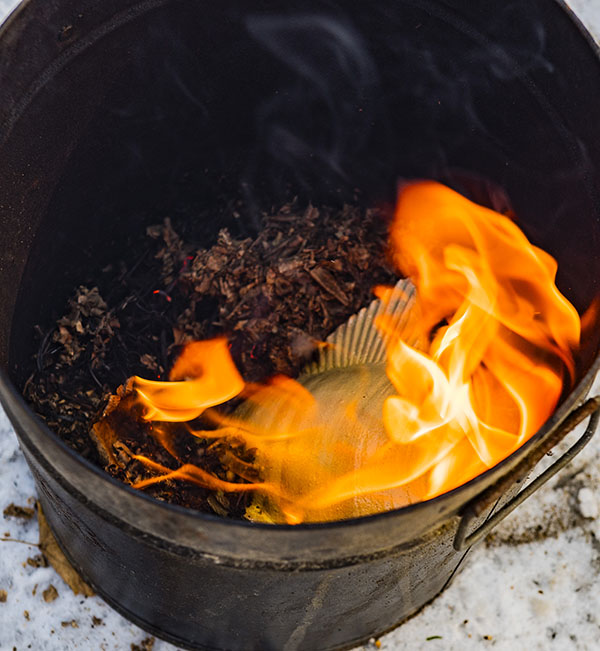 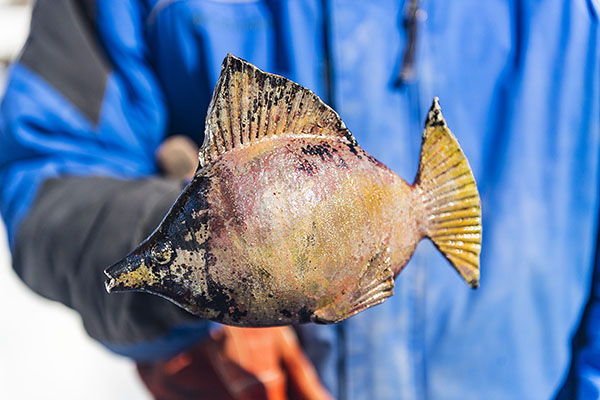 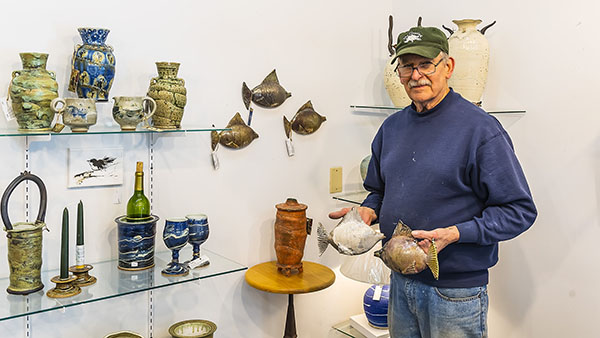 In a small, unassuming kiln just a few yards from the entrance to Ellison Bay Pottery, potter John Dietrich finds relief from artistic perfection through a centuries-old tradition of Zen Buddhist masters: raku.

A Japanese word for “ease,” raku is also a traditional Japanese firing process developed in the 16th century and favored to create the teapots and cups used in wabi-style tea ceremonies. Both the process and the final product are esteemed for their reflection of the Buddhist ideals of simplicity, imperfection and naturalness.

In raku firing, red-hot pottery measuring 1,800 degrees Fahrenheit is removed from the kiln and placed in a box filled with combustible materials. (Dietrich favors sawdust, straw and newspaper.) Once the materials ignite, the box is covered, and the flame and carbon are allowed to swallow up the oxygen and mingle with the clay bodies. The results are tangible recordings of “what’s happening with the fire,” Dietrich said.

“They’re making a recording: how much carbon is wafting through and touching, concentrating and not concentrating. You get the accidental that way,” he said. “You can get iridescent colors, bright colors, flash. They can also be matte. You can get a whole range of surfaces.

“It’s this spontaneous celebration,” he added. “It’s the celebration of the immediacy and impermanence of life.”

Dietrich reserves this firing process largely for vases and his raku “school of fish,” a unique collection of shimmering fish sculptures that begin their journey as vases before undergoing alterations to take their final form. This off-the-cuff form — a break from Dietrich’s traditional high-fire work — is a reflection of his dedication to embodying the spirit of raku.

“It’s a respite from being spot-on,” he said. “Consistency is difficult, and that’s the goal with the high fire. But to do something with some degree of spontaneity where I’m not the ultimate arbiter of the color and the surface — it happens because of spontaneity — that, to me, is fun.” 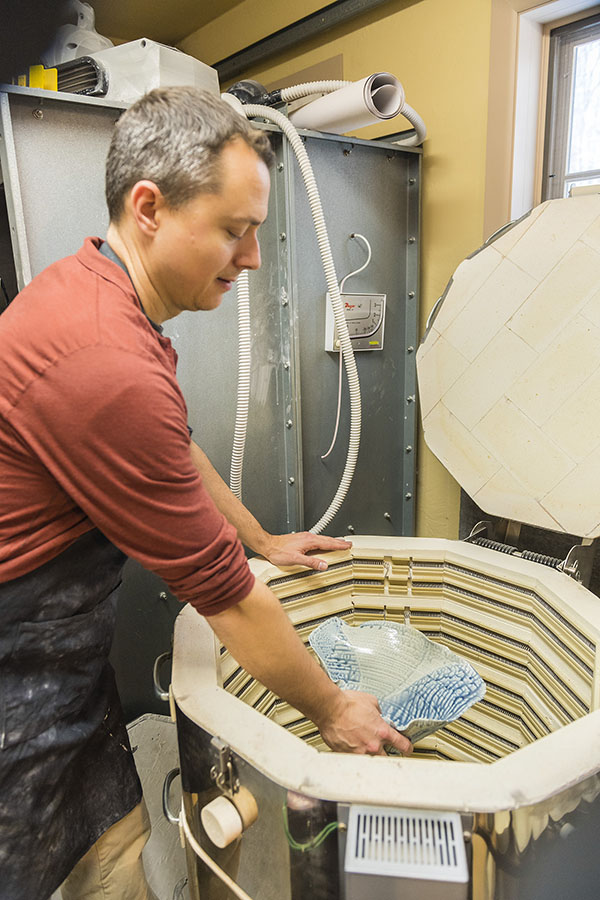 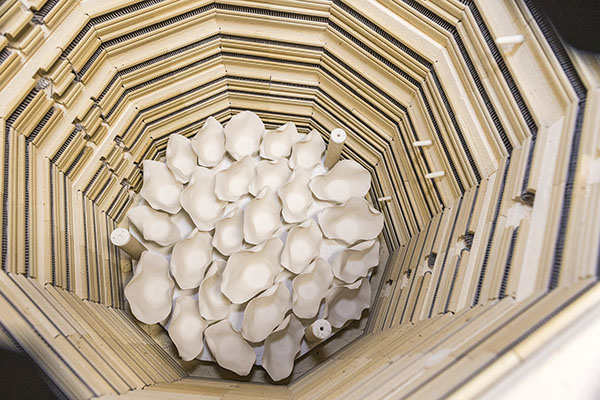 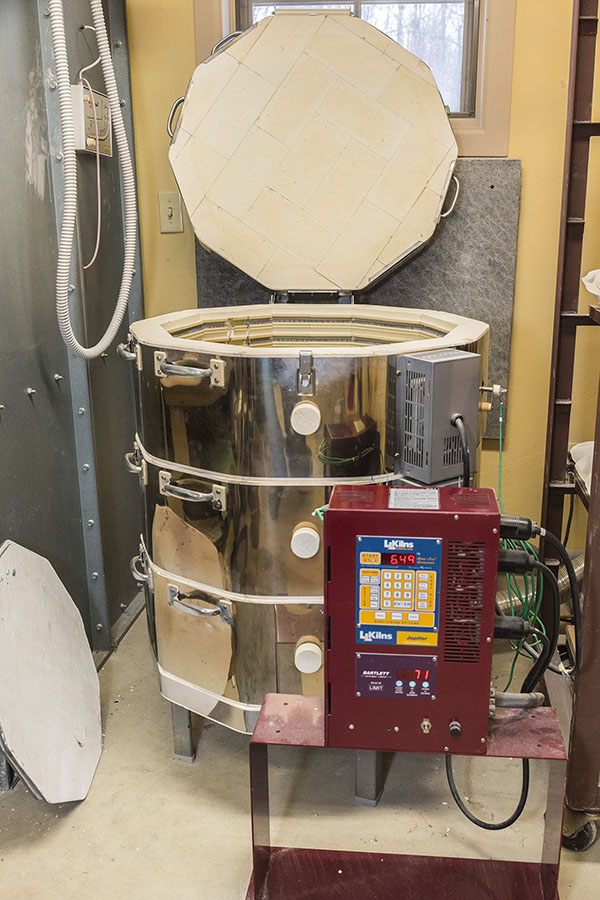 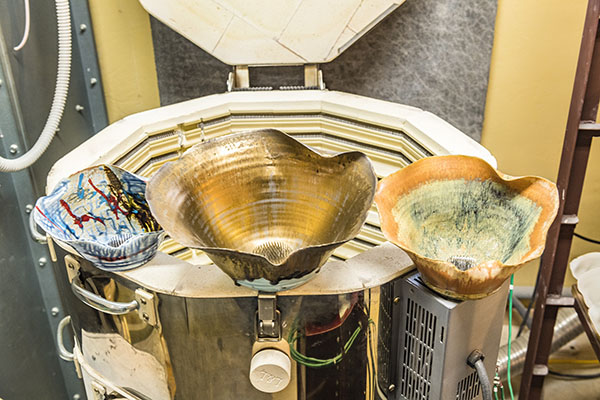 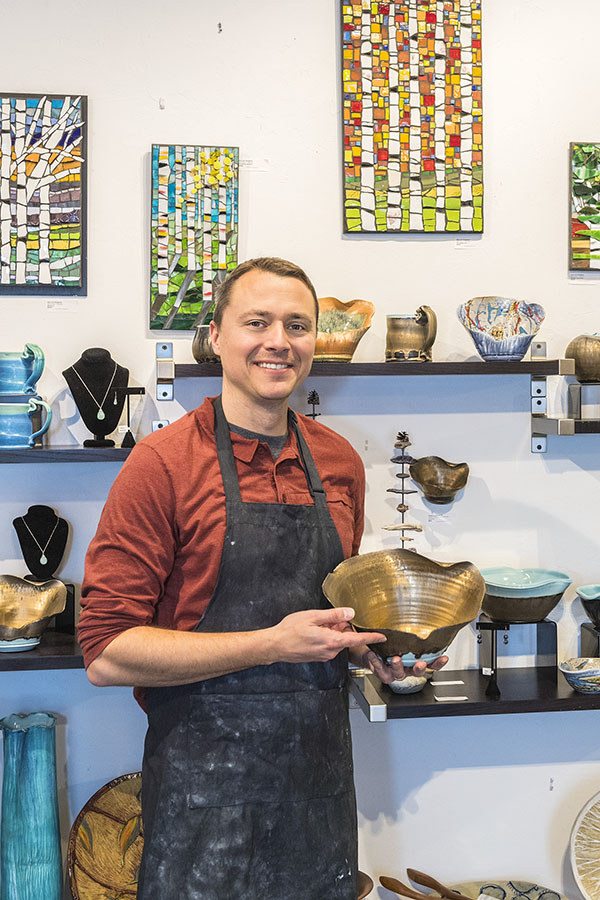 Whereas a reduced-oxygen environment — such as those created during the wood-firing and raku processes — creates unpredictable colors and mottled textures, an oxygen-rich environment allows for clean, bright and rich colors.

For Chad Luberger of Plum Bottom Pottery, the predictable results of oxidation firing represent the ultimate freedom. He fires in a computer-controlled electric kiln, which he likens to a giant toaster.

“You’re running electric elements through your kiln,” he said. “There are plenty of air gaps in those kilns that oxygen can easily flow through, and you’re running what’s called an oxygen-rich or neutral atmosphere.”

In the art world, control and electric can easily draw conclusions of ease and a production mindset. It has meant the opposite for Luberger, who has left reduction firing in gas kilns behind for the energy and time-saving efficiencies of his electric kiln.

Where he once spent three months building clay bodies and getting between four and six firings per year, he is now able to produce porcelain work for the smaller electric kiln and fire it at least every four weeks.

“I’m really able to transfer all that knowledge back into the work a lot more quickly,” he said. “So on the glaze side, improvements are happening at a quicker rate because I’m having a lot more information in a typical year than I was before.”

Ironically, the efficiencies of modern equipment have allowed Luberger to continue evolving his ikebana vases, which are used in an ancient art form: Japanese flower arranging. He has also fashioned himself into a crystallographer of the artistic sort, taking advantage of the consistency of heat in his electric-fired kiln to play around with crystalline glazes.

“With crystalline glazes, you’re actually encouraging crystals to grow in your glaze,” Luberger said. “Crystals naturally form in the earth over millions of years, but what I’m able to do in a 24-hour period is reproduce the conditions in the earth that crystals grow in.”

For pottery lovers, this constant feedback and artistic freedom lead to constant surprises during each visit: the ultimate goal of every artist.

“Like [with] all art, you’re constantly looking at your results and going, what do I want to do next?” Luberger said.