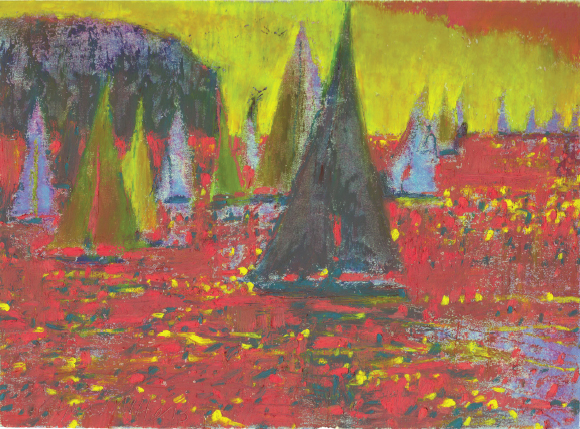 French Impressionist Edgar Degas once insisted that while “It is all very well to copy what one sees…it is far better to draw what one now only sees in one’s memory. That is a transformation in which imagination collaborates with memory.”

That intersect of reality and ingenuity is exactly where Door County artist Ryan Miller draws from when he creates the abstracted landscapes and graphics he has become known for since moving to the peninsula four years ago.

Whether those images are created digitally for the Peninsula Pulse newspaper or Door County Living magazine, where Miller works as creative director, or through oil pastels on matboard at his studio, his goal remains the same — to bring people into the unchartered territory of his imagination and the process by which it becomes a work of art.

Creating art has always come naturally to Miller, who credits the encouragement of his family and teachers, along with the art offerings of his high school, for starting him on the path that brought him from his hometown of Mequon to the University of Wisconsin — Green Bay and finally, the Door Peninsula.

Here, he has found comfort in the challenge of his medium of choice, oil pastels, and in excessively pushing boundaries to communicate himself to the world. Nature is “the ultimate inspiration” for this artist, who creates not from photographs but from two boundless places:  his imagination and memories.

The result is a collection of work that crosses the boundary between abstraction and representation, and that gives viewers both a glimpse into Miller’s process and the same freedom in interpretation that he enjoys in creation. 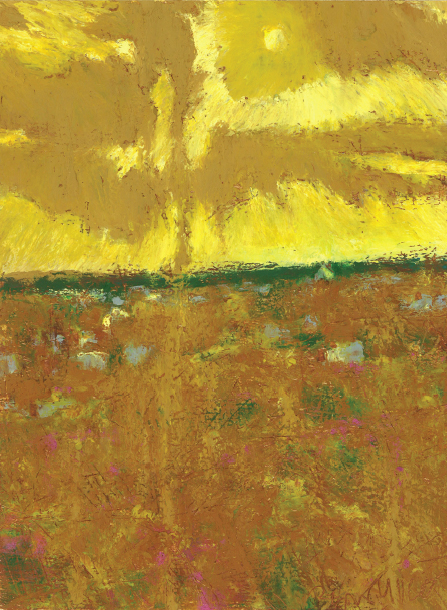 “I see a moment or feeling; I take that feeling, that essence and just kind of let it grow from there. I think that’s the excitement and why I’m excited to create a work of art,” he explained. “I don’t rely on this static image, it’s kind of the potential of an image. I can let it bloom on its own progressively. I don’t need that much because I like to rely on the spontaneity of creating and figuring it out…I like to think I’m not in control almost; it’s almost like my subconscious is. Sometimes I won’t even look at it, I just kind of go off of feeling.”

That feeling is as physical as it is emotional for the artist, who attributes his fondness for oil pastels to its intimate nature — while an artist can certainly draw with an oil pastel stick, the variety Miller achieves in his work results from his willingness to interact with the messy medium.

From wide, brush-like strokes visible in the petals of his floral paintings to the tiny flecks of color representing fireflies and fruit in his landscapes, all are achieved with his fingers.

“I rely on my imagination and my memory,” he said. “Since I’m relying on that feeling, I think it helps to use your body itself.”

As one might expect, drawing from memories while living and working in scenic Door County means a never ending flow of ideas for the artist. 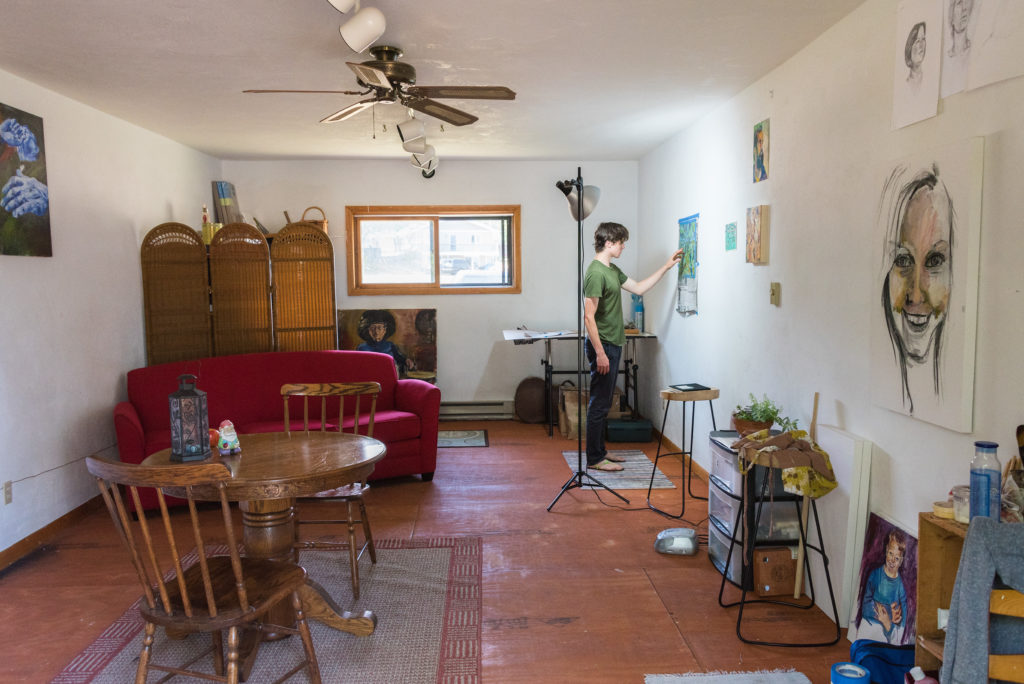 As these mental images are perpetually in motion, Miller creates each piece in one standing.

“These smaller ones are done in probably five to seven hours. That’s how I tend to work, which I guess kind of speaks for not working from an image, a photograph,” he said. “I’m not concerned with minute details. I work in the moment.”

His work has reached audiences at galleries and exhibitions across the state, including the Mt. Mary Starving Artists’ Show, Hidden River Art Festival, Townline Art Fair, Peninsula School of Art, the former Dovetail Gallery, The Cookery, and Purloin Studio in Menomonee Falls, where he exhibited from 2010 until 2014. 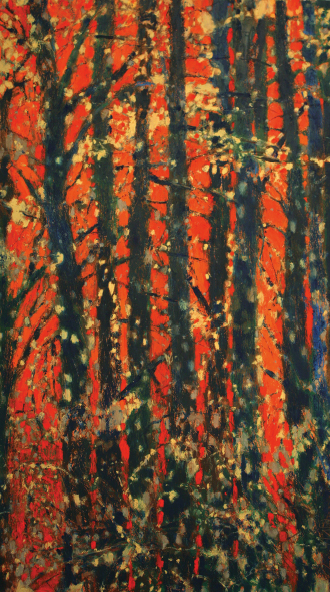 Purloin Studio owner Susan Corkum recalls her introduction to a quiet, young man who expressed his ideas and approach to art through his creations — a trend that continues today — and whose grasp on his artistic vision has continued to impress the longtime artist.

“There was something from what he was doing that you don’t see real often in young artists,” Corkum said. “It’s kind of like they grow into this but he had already matured into it at his age…finding what his niche would be, what his style would be, he knew how to express himself.”

“We had an event in here around 2011 and he did a live paint for us right in the front window,” she added. “He stood there and talked and painted and quietly went about his work and produced this lovely piece on board. People just went, I can’t believe this young man standing up there painting and has no qualms about it. I have very few words for Ryan about what he does and his work speaks definitely for him. He doesn’t even have to talk to show it…I have incredible admiration for him. And when I close my gallery in my old age here, he will be one of the artists that will definitely stand out in my mind that I have met in my entire 40 years.”

When he’s not creating art, Ryan Miller can be found exploring Door County with running shoes, hiking boots or a kayak, strumming a guitar or recording witty cameo videos. To see more of his work, visit rymill.me.