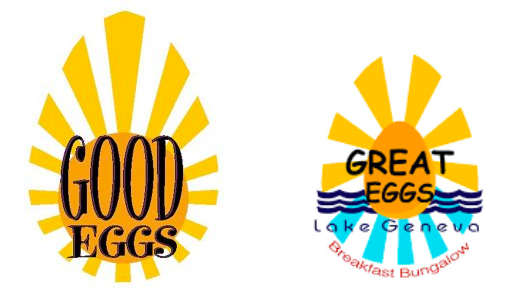 Good Eggs and Great Eggs logo side by side. Submitted separately.

Back in 2015, I wrote a story in these pages about AT&T’s plans to build the first camouflaged cell tower in Door County: a tall “pine tree” in the parking lot behind Cornerstone Pub in Baileys Harbor.

In that story I referred to it with a word that means “furtive,” “secretive” and “covert.” It’s a seven-letter word that begins with “s” and ends with “h.”

Very shortly after the story ran, our office received a legal letter from a South Carolina tower builder claiming that the word is a registered trademark of its company.

My point about using the word is that AT&T promised to “stealthily” (I’m allowed to use that form of the word) conceal the tower in plain sight.

My first thought was that the South Carolina company was making a ridiculous claim and that we should fight it for the use of this common word. However, my boss was not interested in getting involved in legal scrapes and asked me to change the word and move on. And that’s what we did.

However, there remains a bitter taste in my mouth when I think about that word and other words that various industries try to hijack, such as “milk,” which Sen. Tammy Baldwin and the dairy industry are trying to codify into meaning liquid only from cow udders.

Welcome to the world of trademarks.

“It’s common for businesses to send out cease-and-desist letters,” said Tyler Pluff, who works on trademark law at the Pinkert Law Firm in Sturgeon Bay.

“The trademark system in the U.S. is based on the first-to-use model,” he said. “The first person to use the mark in commerce is granted protections from others using the mark in a way that would cause consumer confusion.”

“Consumer confusion” is the key phrase. Pluff points out, for example, that there is no consumer confusion between Delta Airlines and Delta Faucets. Consumers know one company is an airline and the other makes faucets, and their paths are unlikely to cross.

Pluff first became interested in trademarks while he was a college undergraduate running a business called DC Tail Waggers that made dog pull toys, which he sold at the Sturgeon Bay farmers market. One day he saw a sign for Tailwaggers Doggy Daycare in Bellevue, Wisconsin, which piqued his interest in knowing more about building brands and trademarks.

“No one wants to put in the effort to build a brand, only to get a letter from someone stating that the brand is infringing on another’s trademark,” Pluff said.

He said it’s just a smart business practice do to your branding due diligence first because a trademark-infringement case is both an intensive and expensive headache for any business.

“My advice to clients is, always talk to a trademark or copyright attorney to make sure [the brand] is really available,” he said.

Joel Bremer of the Ephraim breakfast-burrito institution known as Good Eggs did talk with attorneys about a possible brand infringement on his eatery but ultimately decided to consider it flattery rather than cause for litigation.

About five years ago, he was approached about whether he would consider franchising his business because some people wanted to do something just like it in Lake Geneva.

“I understood if you’re franchising, you’re essentially selling a set of instructions to somebody,” he said. “I had never codified my systems at Good Eggs. My impression was by franchising, you break your restaurant down into the simplest steps so any idiot can do what you do. That kind of made me feel like I’m going to surround myself with idiots, and I thought the people I work with don’t need things broken down into that chewable-size bite. I was more interested in people internalizing the processes we have here.”

So he told the guys from Lake Geneva, “There are no copyrights for recipes. There are no intellectual-property rights in the kitchen. I didn’t discover breakfast. I didn’t invent the burrito. And I don’t begrudge anybody who wants to make a living doing what I do.”

He wished them well and told them to make it their own. So they did – sort of. They called their business Great Eggs and added a couple of design elements to what was essentially Bremer’s logo.

“I had to shake my head a little bit,” he said. “I was a little bit taken aback at the degree to which they did everything pretty verbatim. They were pretty proud of themselves that they put waves beneath the logo. They thought that was a fantastic addition, and in their minds [that constituted] making it their own.”

But Bremer had asked the attorney he worked with when he first incorporated the business about trademarking the business.

“He said, ‘You can try, but you’ve got pretty generic terms in your name, and it would be pretty hard to copyright,’” Bremer said.

So Bremer decided to take the high road: “Imitation is the sincerest form of flattery,” he said.

Bremer has heard from some of his customers who have seen Great Eggs and are incensed by what appears to be a blatant ripoff, but he defends Great Eggs.

“It’s fun to see my customers get bent out of shape and be able to tell them, ‘Hey, there’s burritos for everybody,’” he said.

But, Bremer adds, “It would certainly be a little harder to swallow if somebody did it in Egg Harbor or somewhere where it might affect my traffic, or if they did a really bad job, and suddenly breakfast burritos were a disgusting thing.”

A call to the owner of Great Eggs in Lake Geneva went unanswered.

Bremer was approached again this year by someone else who asked about franchising his business.

“I told them the same thing I told the Lake Geneva folks. In fact, I told them they should go to Lake Geneva and see how they’re enjoying it,” he said. “If someone were to go and franchise the concept and make 100 stores and multiple million dollars, none of my buddies would feel sorry for me and say, ‘Oh, Joel was about to do that.’” He laughs. “Because I’m not about to do that.”