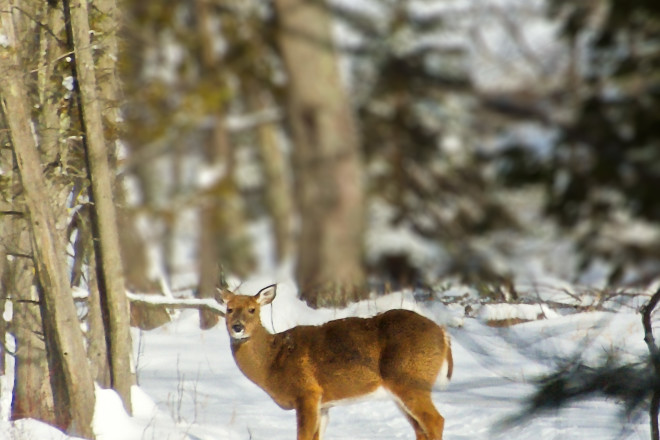 A solitary deer in the winter woods. Photo by Len Villano.

The elementary student stared at the thermometer in disbelief. His class was on a winter field trip to Crossroads at Big Creek and at one of the activity stations, the children were asked to take the temperature of the air and then to insert the thermometer as deeply as possible into the snow and check that temperature.

Because he knew from experience that snow was cold, this young man (and the rest of his class) had predicted that snow would be colder than air. But repeat trials using several different thermometers convinced the children of a wonderful attribute of snow. It creates insulation.

“Snow blanketed the forest” is more than poetry. Snow truly acts like a blanket or maybe more accurately, like a down comforter or a puffy down jacket.

Down comforters work because, when properly fluffed, they trap a great deal of air. And pockets of trapped air insulate, keeping warm in and cold out.

To explain to the schoolchildren, I asked them if they had ever folded paper and cut snowflakes. Of course they had, so I suggested they look at real snowflakes with a magnifier, or better, to do an image search of snowflakes on the internet so they could see that real snowflakes have far more air spaces than the most intricately cut paper ones.

Real snowflakes also usually have pointed edges so when they fall gently to the ground, if they land on any of their six points, a significant volume of air is trapped between individual flakes.

So what is a significant volume? Fresh, fluffy snow can be 90 to 95 percent trapped air. Researchers estimate that this would result in an insulation rating of R-18.

While children were surprised to learn that it is warmer under snow, wild birds and mammals are well aware of the blanket effect. Often birds will dive into drifts to escape bitter winds (or predators).

Mice and voles create elaborate tunnels, taking advantage of the space in which heat from the ground melts the bottom layers of snow.

Even deer use snow to avoid energy-draining wind. In bad weather, they move into swamps or deep woods. During storms, snow piles up on the branches of evergreen trees. And snow-laden branches bend downwards, forming what amounts to a snow tent. Deer snuggle under this shelter, and protected from wind, they stay warm by curling up with their noses tucked next to their bellies, and ears pressed close to their heads to prevent frostbite.

The snow blanket also protects tender plants from cold and wind. Young plants are apt to survive in years like this one when snow fell before we experienced brutally cold weather. We can only hope our beneficial blanket remains until spring, and that for the rest of winter, the fresh insulating snow falls in gentle, manageable increments.

Coggin Heeringa is the Director of Crossroads at Big Creek and Instructor of Environmental Studies at the Interlochen Arts Camp.