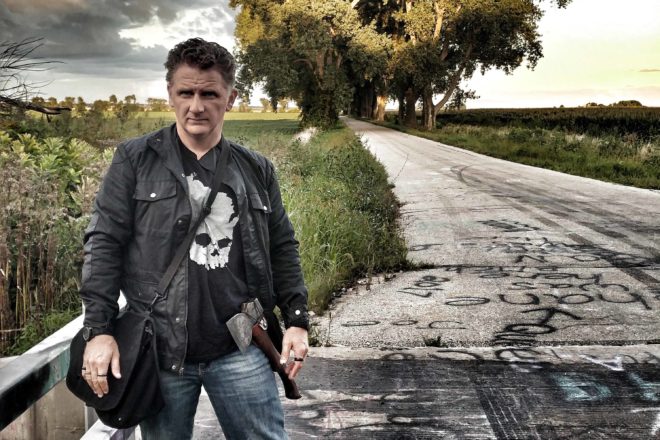 Chad Lewis is prepared to tell the story

In 1972, while studying for a master’s degree in social history at the University of Wisconsin, Michael Lesy came across a photograph taken by Charles Van Schaick, who served as the town photographer and justice of the peace in Black River Falls, Wisconsin, during the late 19th century.

Like Lesy, Chad Lewis was conducting research through microfiche newspaper files when he, too, saw a bigger story about bizarre things that made it into old newspapers. His research resulted in the book Hidden Headlines of Wisconsin: Strange, Unusual, & Bizarre Newspaper Stories 1860-1910.

Lewis will distill the information from that book into “Bizarre History of Wisconsin”: a Monday, July 22, dinner presentation for the Door County Historical Society at the Kress Center in Egg Harbor.

Lewis has spent his life researching odd phenomena, beginning in high school in Eau Claire when he interviewed people in Elmwood, Wisconsin – one of the three self-proclaimed UFO capitals in the state – about the UFOs people have claimed to see in that western Wisconsin community.

“I happened to be studying psychology the next fall in college,” Lewis said. “That was what I was really interested in: why some people believe in the supernatural, think they’ve been abducted by aliens or think they’ve seen a bigfoot, and others not at all. What it is it about our human belief systems and perception? So I started researching that at college as an undergraduate student and started presenting my findings, looking at beliefs, gender differences, education differences and the like.”

At these presentations, people approached Lewis for help with their haunted homes or to tell him their stories about encounters with bigfoot, lake monsters, aliens and more.

“I ended up in grad school doing my master’s thesis on student belief in the paranormal. It just kind of went from there,” Lewis said of the start of his career as a researcher into and writer about the supernatural and the weird.

“I never would have guessed 25 years ago that I would be doing this as a career,” he said. “I can list on one hand the amount of people who do this full-time as their primary career. Even today it’s not seen as something that’s a viable career, and it certainly wasn’t back in 1993 when I graduated high school. Nobody said, ‘I’m going to try to document folklore and the supernatural.’

“It has come a long way now: where the stories I used to collect were often given in a whispered tone and looking over their shoulder to make sure nobody’s listening, to today, when someone raises their hand at a lecture I do and tells me the weirdest story I’ve ever heard. And [does] not bat an eye about it.”

Having done this work for a quarter-century, Lewis has a well-developed sense of the credible weird and the noncredible weird. Regarding the latter, he said a fellow at a conference wanted to talk to him and a couple of his colleagues about a group of bigfoots who lived on his property.

“We were very excited,” Lewis said.

But then the man added that the researchers would not be able to see the bigfoot folk because they exist in a different dimension, and he was the only one who could see them. Lewis said the excitement he and his colleagues first felt quickly diminished, especially after the man explained that the bigfoots lived just like us, with barbecues and pool parties and everything.

Although Lewis has developed standards for his investigations, he also acknowledges that he’s working in uncharted territory.

“My motto has always been, When you’re researching the weird, what is too weird?” he said. “Are vampires too weird? Are stories of werewolves too weird? If you make that cutoff, you might miss a good story.”

Lewis said his focus on bizarre Wisconsin stories happened by circumstance while he was looking through microfiched newspapers to research a haunting.

“I would run across these stories I found really intriguing,” he said. “I started printing them out. I wondered how many I could gather if I just started looking for weird stories. That’s what I did. Paper by paper, day by day, looking for oddities. I was amazed. I found way more than I could ever use. Some of these stories are so amazing that you have to ask, did this really happen or was it a slow news day circa 1897, and they put something in no one could Google?”

He mentions, for example, the story of a woman who supposedly gave birth to a half-human, half-dog child – hairy and with a long snout – which, the story pointed out, did not stop the mother from being fond of the child.

“Of course, no photo accompanying the story,” Lewis adds.

On Tuesday, July 23, and Wednesday, July 24, Lewis will talk about UFOs in Wisconsin at the Sturgeon Bay and Sister Bay libraries, respectively. Both talks will begin at 2 pm.

It was recently reported that the U.S. Navy has become the first military branch to draft guidelines for pilots to report unidentified flying objects because, according to one former senior intelligence officer who spoke to the Washington Post, the Navy has evidence of UFOS “that can fly over our country with impunity, defying the laws of physics, and within moments could deploy a nuclear device at will.”

Lewis said he and others who have been involved in investigating UFOs are intrigued by the timing.

“I think it’s very curious after all these years of denial and false claims that all of a sudden they’re saying there might be something out there,” he said. “That’s the most fascinating thing in the last year. Not the fact that people are seeing these things – incredible people. We’ve always known trained observers – pilots, police officers – have seen these things. People are curious about the timing of this. For decades, it was always denial. The government denied their existence. ‘We don’t even care about UFOs. It’s just a joke.’ Now some of these sightings are starting to trickle out, and they’re giving some credibility to them. Some people are wondering, why now? Are they preparing for some announcement, or just more of the puzzling behavior and adding more confusion?”

Lewis is happy to bring his UFO research to Door County, a place he says “would have to be put up there on the Mount Rushmore of UFO history because the Aerial Phenomenon Research Organization (APRO) was brought to life in the 1950s in Sturgeon Bay by two residents there. It was thought to be the most credible UFO organization at the time. It’s defunct now but had hundreds, if not thousands, of members from around the world.”

We’ll share more about APRO in a future edition.