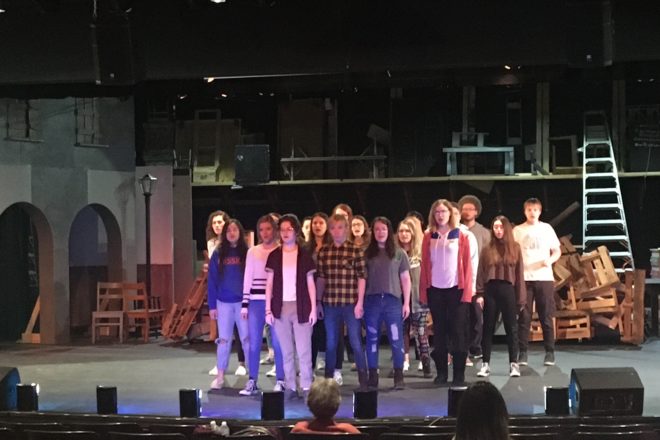 Students at Sturgeon Bay High School rehearse for their production of Les Misérables. This performance, along with others at Door County area high schools, were canceled because of the ongoing COVID-19 pandemic. Submitted.

Much has been made of the cancellation of the high school sports season due to the COVID-19 pandemic. But often lost within these conversations is the similar fate of many fine-arts and academic programs. Much like a baseball player might train during the winter for the spring season, many students who thrive in these other programs have seen hours of hard work end in disappointment.

Sturgeon Bay High School was in the midst of rehearsing for its production of Les Misérables – scheduled to run April 22-25 – when the school closed in March. Musical director Leslie Hill said the cast would have been rehearsing during class and for three hours in the evening this week. Tech Week – parlance for the time when the cast and crew put together the lighting, sound, stage set, props, costumes and pit orchestra – would have taken place April 13-17. After a full-day dress rehearsal  April 18, the finished product finally would have been ready for public performances.

“Honestly, I feel bad for my seniors, but I feel bad for all of my kids,” Hill said. “We had definitely been working during school and after school for the entire month of February and March leading up to this. The set is built; the props are built; and the costumes are ready.”

Senior Madeline Blahnik says she was excited to finish her high school career with a difficult production such as Les Misérables. She was slated to play the role of Fantine, a single mother who endures severe hardships and disappointments in order to provide for her child.

“It’s really disheartening to not have our show because we’ve looked forward to it for so long,” Blahnik said. “[Fantine] was in a situation where she didn’t have control of the environment around her, and she was impacted by every aspect of it. It’s kind of what we are seeing here. Everyone here is impacted by COVID, but there is only so much that we can do. It’s not like we have a choice whether or not it’s in our community.”

Blahnik – along with Isabella Dippel, Ian Vitela, Timothy Wesley-Bee, Grace Alberts, Andrew Konop and Kalei Klaubauf – had also qualified for the now-canceled Wisconsin School Music Association (WSMA) Solo and Ensemble Festival May 2 at the University of Wisconsin-Green Bay. They qualified by turning in top performances at the WSMA district competition.

“The music they perform to get to the state level is college-level music,” Hill said. “This isn’t ‘Twinkle, Twinkle, Little Star.’ It’s the big, heavy hitters like Mozart and Beethoven.”

Gibraltar musical director Lizz Thomas said the school’s production of Bye Bye Birdie was canceled, and, like the cast and crew in Sturgeon Bay, her students would have been putting in long hours of preparation this spring. Thomas said she has students who will also miss out on the state forensic competition and the state one-act-play meet. Gibraltar has participated in the forensic competition for the last 10 years.

“I got a lot of disappointment,” Thomas said. “I had eight seniors who were really looking forward to their last show at Gibraltar. Some of these kids I have been working with since eighth grade.”

Senior Hayden Hoffman had been cast as Conrad Birdie, a popular rock-and-roll star who has been drafted into the Army. Sensing that his meal ticket is getting away, Birdie’s manager organizes a publicity stunt in which Birdie travels to Ohio to give one adoring fan a kiss goodbye.

“I’d like to consider myself luckier than Conrad since I get to stay at home and play video games while he had to get shipped off to the military,” Hoffmann quipped. “It’s definitely not how I was planning on ending my senior year, and it’s really sad to think that I probably won’t have the chance to share a stage with my friends ever again.”

Although Southern Door High School didn’t have a musical planned for this spring, the traditional school pops concert – scheduled for March 17 – was canceled just one week before the performance. The two bands would have performed six songs, and the three choirs would have performed nine songs.

Band director Naomi Files said that band members typically prepare for concerts for 10 weeks beforehand. The band logs four hours of rehearsal each week along with individual lessons outside of school.

“I’m especially sad for the seniors who I let choose the music for this concert,” Files said. “They’ve been looking forward to choosing the music for the pops concert since they were freshmen. They finally got to make that choice. They had these pieces they were super proud of, and it just didn’t happen. For me, it was really disheartening to see the looks on their faces as they realized it was one more thing that was being taken away from them.”

Sevastopol High School guidance counselor Melissa Malcore said the school closure has been difficult for some of the seniors who are making college decisions. Nationwide, students who were planning to take the ACT and SAT tests during the spring are awaiting rescheduled dates.

“Thankfully, all of our juniors were able to take the ACT earlier this year,” Malcore said. “Many of our students have already made college decisions or have applied and are still deciding. Some colleges have changed some of their deadlines in order to relieve stress for students.”

Malcore said educators are doing their best to serve their respective students from a distance.

“There is frequently some stress that comes with change,” Malcore said. “For me, it has been finding other ways to successfully connect with students during this time.”

Hill and Files agreed that the most prominent missing piece in the school shutdowns is the community and social aspect of their programs, which is not unlike the camaraderie in a locker room or dugout.

“Choir gives them an anchor in their school day – a place and a group of people to be with and work on a common goal,” Hill said.

“I know it’s killing some of them – figuratively,” said Files, who connects with her students electronically during the normal class period. “Some days I’ll have five or six kids logging in just to talk to each other and kind of have that social aspect again.”