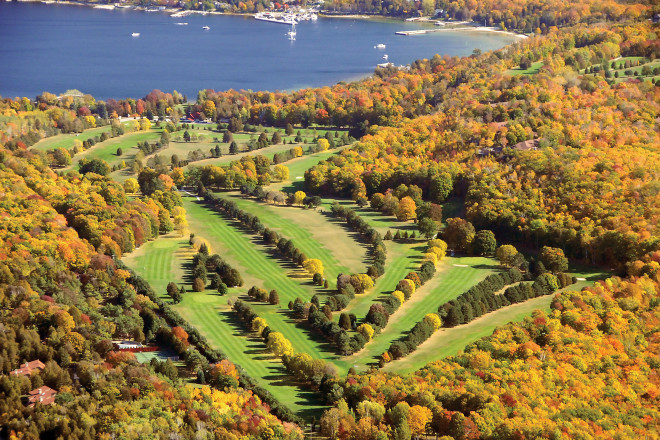 Door County first built a reputation for itself around its abundant coastline and thriving maritime industry, at a time when many visitors to the peninsula arrived by boat. Now, thousands of people visit Door County each year, most arriving on a set of wheels (cars, campers) and using other sets of wheels (bicycles, motorcycles) to get around once they’re here. It’s clear that Door County is easily navigable by water and by land – but what about by air?

Absolutely. According to historians John Enigl and Wallace “Bud” Felhofer, airplanes have been taking off from Door County ever since September 19, 1912, when a pilot named Lincoln Beachey flew a fragile biplane over the Door County fairgrounds. In the 1920s, a time when even distant airplane sightings were still cause for comment in the Door County Advocate, enterprising business people began to use the relative novelty of air travel to market their business ventures. Resort owner J.V. Woodruff, for example, planned (unsuccessfully) to build an airport to shuttle Chicagoans to his Ephraim resort long before the Ephraim-Gibraltar Airport was constructed in 1946.

Two other airports were built in Door County even earlier than that. The Washington Island airport, where planes began taking off and landing in 1927, is the oldest airport in Wisconsin still to be located in the same spot where it was originally built. Sturgeon Bay’s Cherryland Airport opened in 1928 as an attraction for the large number of tourists who were expected to visit the county for that year’s Cherry Blossom Festival. The festival brought an estimated 10,000 people to the peninsula, stirring an interest in Door County aviation that remains strong today.

Though aviation has always been a major tourist draw for Door County, flying has also always appealed to county residents as an important agricultural and industrial tool. As early as the 1920s, for example, farmers began using airplanes to dust their crops. Among the crops first dusted by plane were cherries, and airplanes further assisted the cherry industry by offering bird’s-eye views of orchards during blossom season and transporting fresh Door County cherries to other parts of the country. Turkey growers found that turkey chicks sustained fewer injuries when transported by plane than by train or automobile. And in the late 1930s and early 1940s, a man named Jack Hadden became known as the “Flying Fish Peddler” when he began using his plane, the City of Sturgeon Bay, as a means of getting Door County lake trout to St. Louis more quickly than ground transportation could.

Also in the 1930s, local pilots began offering flight lessons at Cherryland Airport under the auspices of the Civilian Aeronautics Authority. When the United States entered World War II, many pilots who were trained in Door County suddenly became vital to American security. At the same time as Cherryland Airport closed because it wasn’t deemed secure enough to operate during wartime, the United States began recruiting (in the words of Door County flight instructor Jules “Bud” Parmentier) “every crop duster, everybody that knew how to fly, to train pilots, because they needed pilots in a hurry.”

After the war, county officials predicted (accurately) that the end of the war would lead to a boom in recreational aviation, in anticipation of which the Ephraim-Gibraltar Airport was built in 1946. The 1940s saw the advent of “Frigid Fun Flights,” an annual tradition in which pilots from across the region flew to the county for aviation-related events, winter sports, and fish boils.

Though the tradition of Frigid Fun Flights ended some time ago, the opportunity to fly over Door County still attracts thousands of tourists to the county each year. In the past, small regional airlines offered commercial flights into Sturgeon Bay (in 1967, for instance, a passenger could fly from Green Bay to Sturgeon Bay for $7.15). Now, the bulk of aircraft at Door County’s airports are small private or charter planes, which offer pilots and passengers relatively close-up views of Door County from the air. Even pilots with significant previous flying experience are often awed by the beauty of the peninsula.

Dave Fish, who works for Grizzly Scenic Air Tours, a Door County charter flight service, says he regularly encounters customers “who have flown all over – the Caribbean, Nova Scotia. And they have nothing on Door County, the beauty of the water. When the light changes, the water color changes, and you can see the shallows and rock formations.”

Like Fish, many pilots and passengers cite the water as the primary draw for those who fly over Door County. In fact, the water is more than just a pretty sight from the air; it also makes for good flying conditions. Pilot Jon Neville, who regularly flies over Door County and who serves as treasurer of an organization called Friends of Ephraim-Gibraltar Airport, explains why flying over water offers an advantage over flying over land:  “Water provides a safety zone where you don’t have heat thermals,” says Neville, referring to bubbles of warm air that rise from the land on a hot day, causing turbulence. “Over land, you have a rougher ride. But as soon as you get over the water, everything is much smoother. On a hot, hot day, [a pilot] might take the plane out over the water rather than staying over the land.”

The narrowness of the Door Peninsula makes it easy for pilots to stay primarily over the water and avoid the turbulence caused by thermals. The county’s relatively flat topography also makes it a good location for flying; mountainous locations can be difficult to fly over in even the best weather conditions.

For all its advantages, Door County also presents pilots with a unique set of challenges. The two bodies of water that surround the peninsula cause unruly crosswinds. These unpredictable air currents have tormented boats for centuries, giving the county the nickname “Death’s Door,” and they can cause similar problems for aircraft. Wind speeds and directions, like all weather conditions on the peninsula, can change quickly between one part of the county and another, and they often vary significantly from other parts of the greater Wisconsin-Michigan area.

Furthermore, many small airports don’t have towers to advise pilots of current weather conditions. So pilots who take off from Door County airports usually learn about winds from on-the-ground internet reports or by flying over a surprisingly effective (albeit low-tech) windsock.

Any area, however, can present pilots with flight challenges, and by all accounts, Door County is one of the country’s best air travel destinations. In addition to the beauty of the water, Door County offers a wide variety of visual treats from the air:  coves, bluffs, islands, lighthouses, shipwrecks, far-off Michigan sand dunes, Peninsula State Park’s Eagle Tower – even Fish Creek’s iconic Skyway Drive-In Theater is visible from a low-flying plane. In the fall, visitors flock to the county to see vivid fall colors from the air; pilot Tim Halbrook reports that many who come to see the autumn foliage leave with bags of apples.

As those bags of apples suggest, many visitors who arrive in Door County by air also explore the county by land once they arrive. According to Halbrook, Door County residents with aircraft at local airports have been known to fly over to the A.C. Tap for burgers, landing in the yard behind the bar’s parking lot, or to fly out to a shanty on the ice for fishing during the winter.

Local air travel enthusiasts have made concerted efforts to provide the pilots and passengers who arrive at Door County airports with access to the peninsula’s many land-based attractions, partnering with local businesses to provide hotel rooms and ground transportation to those who arrive by air. Pilots who arrive at the Ephraim-Gibraltar Airport, for example, have the option of borrowing either a minivan (donated by Friends of Ephraim-Gibraltar Airport) or mountain bikes (donated by local businesses) to get around on land.

Partly due to visitor-friendly efforts like these, Door County’s airports haven’t stopped generating tourist income since the Cherry Blossom Festival back in 1928. As Halbrook puts it, “Lots of people [who fly into the airport] go to Wilson’s for a burger, to the park for a picnic, or into Fish Creek to buy a trinket.” Neville adds, “People fly in from Milwaukee just for breakfast at Julie’s [Park Café].” According to one economic impact study, commercial visits like these mean that even an airport as small as Ephraim-Gibraltar generates over $400,000 annually for the town in which it is located.

But tourism is far from the only reason people fly into, out of, and around Door County. The peninsula’s relative geographic isolation makes air travel a vital method of transportation in medical emergencies, especially on Washington Island. Enigl and Felhofer claim that the Washington Island airport has saved several lives since its construction in 1927. In the 1930s, Dr. Dan Dorchester (who came to be known as “The Flying Doctor”) often used his airplane for medical journeys. In one instance, he even picked up a nurse named Ruth Brye at her home and flew her to Washington Island in order for her to help with an immunization and inoculation program.

Air travel still provides an important medical link to islanders. In 2005, the airport installed a helipad to make it easier for emergency pilots to land helicopters. Whereas it could take hours to transport a patient to the hospital via boat and automobile, it’s only “a 20-minute flight [to medical care] if we have an emergency, so it works pretty well for us,” says Washington Island airport manager Walt Nehlsen.

Even on the mainland, air transport can prove vital to providing people with proper medical care. Dave Fish reports, “We used the [Ephraim-Gibraltar] airport for an emergency just yesterday – we ambulanced [a heart attack patient] here and then flew him out.” The Ephraim-Gibraltar Airport also houses planes used in the Angel Flight network, a charitable flight organization. As Neville explains, all Angel Flight pilots are volunteers, and they offer flights to “people who are in need – not necessarily financial need. Maybe they just can’t drive to Marshfield or the Mayo Clinic for their chemo.”

Medical missions are not the only functional use for Door County aircraft. Aircraft piloted by the Civil Air Patrol are used in 98 percent of search and rescue missions on the peninsula, and law enforcement officials often work closely with pilots in the area. Last year, for example, when Washington Island was temporarily without a sheriff, deputies flew back and forth to the island as needed. Groups like the EAA (Experimental Aircraft Association), the AOPT (Aircraft Owners and Pilots Association), and the Bay Fliers Model Club all boast Door County residents as members – signs that the aviation community in Door County is thriving.

No matter what takes people into the air above Door County, they all see the beauty that Lincoln Beachey saw when he became the first person to fly over Door County in 1912.

“Every time I go up, I see something different,” says Dave Fish. “Last year, we flew a 90-some-year-old Door County woman who said, ‘Am I ever glad that I waited till now to do this, because I thought I’d seen everything there was to see in this place. But you don’t see the beauty of Door County except from the air. People totally miss it. Breathtaking.’”

Much of the information for this article came from They Wanted Wings:  A History of Door County Aviation, by John Enigl and Wallace “Bud” Felhofer, copyright 2001.