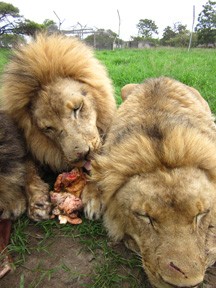 Male lions fight for dominance by lying on top of as much meat as they can fit underneath their bodies. Photo by Colin Frater.

Eighteen of us crouch a few feet away from a chain link fence. Inside the fence, directly in front of us, the handlers have arranged a huge pile of meat. On the other side of the enclosure, four giant male lions pace, waiting to be released. Our guide, Itai, signals to the handlers, who slide the gate open. We can hear the deep, throaty roar of the lions as they gallop toward the fence. Their manes whip and snap around their faces, the black and gold flecks crackling like flint lighting fire.

The rumble sounds like four V8 engines revving. Their mouths are already frothing and in a heart-stopping instant 400 pounds of lion slams into the gate in front of our faces. The gate shivers and I cannot stop myself from falling backwards, away from the action, even as I’m snapping a photo. The deafening roar continues as the males fight for dominance by lying on top of as much meat as they can fit underneath their sinewy bodies.

The slogan here at Antelope Park in Zimbabwe – “Where Else in the World?” – quite aptly encapsulates a program dedicated to saving the African Lion through breeding, education and reintegration. In the past few years, the park has become one of the premiere destinations in Zimbabwe, next to Victoria Falls.

We are currently traveling with a British company called Oasis Overland, and our group numbers around 20. Of that number, we have nominated one person as “most likely to get eaten by lions.” His name is Steve. At 55, Steve has a face permanently reddened by the sun, but by his own admission, “smooth as a baby’s bottom,” twinkly Scottish eyes, and a tattoo on his left forearm that reads, ”Amanda.” A former con man who went to jail for kiting, he wears a camouflaged jacket, a cowboy hat, and hiking boots.

Not surprisingly, Steve draws the ire of one of the lions, who lunge at the gate, jaws snapping and saliva flying.

“Shhhh,” says Steve, leaning in for a photo. Again the lion throws himself against the gate and Itai encourages Steve to step back.

“For god’s sake Steve, it’s not a Jack Russell,” someone says.

When one male clearly emerges victorious and proceeds to take a nap while lying on a giant pile of entrails, we climb back onto the truck and head toward camp. We are all a little relieved that Steve’s antics are finished for the time being.

The founders of Antelope Park are native Zimbabwean (of European decent) and they began the project after saving two lion cubs. They integrated the cubs into their family, and as they grew, took them for evening walks with the dogs. Soon, the cubs began to display their natural hunting instincts, despite being domestically raised. This gave the couple an idea, and the project was born. In a dramatic twist of events, one afternoon while the owner was playing with a lion he raised and trusted, he was brutally attacked by another lion. Unbeknownst to him, the second lion had been let into the enclosure. It was an accident that cost him his arm.

“His lion probably saved him, don’t you think?” James, an Aussie with a thick outback accent, whispers.

“I don’t know, but that would make it a better story,” I say.

“Had to have been. How else did he make it out alive? You can’t fight off a 400-pound lion by yourself.”

The alarm goes off at 5:30 am. I roll over and groan. Then I remember I’m walking with lions this morning. The night before we had a major thunderstorm, and the morning air feels crisp and cool, the sky still covered in clouds. We meet under a covered patio with posters detailing the different stages the lions progress through under Antelope Park’s program. One sign reads:

Stay with the group

Do not wear dangly items

Do not put anything on the ground

Approach the lions from the rear

Do not touch lions on face or ears

Use stick correctly – not for hitting lions

Itai has an easy, likable manner and wide smile. He wears a green collared shirt with Antelope Park embroidered on the chest and beige corduroys.

“Now it is very important you are following these advices when walking with the lions,” he says. “These lions are two years old. They are used to walking with humans, but you still must be aware of the location of the lion.”

He looks each of us to make sure we’re following him. He picks up a stick and makes a crude stick drawing of a lion in the sand.

“You should not be touching the lion on the head or ears. This is his territory and maybe if you are touching him there he gets angry, and perhaps, can I say? Sometimes you are losing a finger.”

Itai’s serious, but when he looks up his eyes twinkle.

“Whatever happens, do not run. A lion can go 45 miles per hour. No human can run that fast. You will not outrun the lion, and then you are not coming back from the walk alive. When moving around the lion,” Itai pauses to move around the stick drawing, “keep distance from the lion’s paws, because he has very sharp claws. If you are wearing dangly items maybe he is – can I say? –maybe he is clawing at your arm or leg and then ripping your clothes and you are bleeding.

Do not put anything on the ground. Once it is there, it’s in the lion’s territory. So maybe your camera is on the ground and the lion is taking it in his mouth and crunching it up and all your nice photos are gone. One more thing: it is important to always stay with the group. Lions are predators, and they are always eating the weak animals of all the species. So maybe you are getting left behind and they think you are weak. Then they are predatory with you and – can I say? –the lion is killing you.”