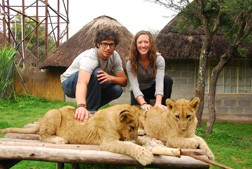 We are given walking sticks that double as distraction tools in case the lions develop an interest in one of us. You throw the stick on the ground next to the lion and maybe he pauses to investigate and forgets about you.

Once we walk out into the game reserve and see the two hulking forms of the young lionesses approaching us, I’m skeptical of the stick’s effectiveness. They are both the deep yellow of sand after a rainstorm, with big brown eyes and – this cannot be overstated – gigantic paws. One crouches down in the tall grass, stalking something. She blends in so completely that the other lioness is caught unaware when she’s pounced on. They play like this, chasing each other, tumbling, running, so that you start to feel like you’re hanging out with two enormous and mischievous house cats.

Eventually the more rebellious of the two (she was constantly being called back by one of the trainers) emerged with a medium-sized turtle in her mouth. She ran around with her jaws clamped on the turtle for a good ten minutes. When she sat down and prepared to dig in, a trainer intervened and saved the poor turtle’s life. Needless to say, he was probably shell-shocked.

Predictably, during the lion walk that Steve participated in, he was reprimanded by the trainers for pulling the lion’s tail and, during the group photo, putting his big red face right up next to the lion’s. Next thing you know, he’ll be scratching them behind the ears (everyone wanted to do this – what cat doesn’t like a good ear scratching? I guess we’ll never know).

None of us could resist the cub viewing, which was scheduled for our last day at the park. At five months old, these cubs are hardly small. But they are still cute enough to melt your heart, and make you wish you had one of your own.

The cubs that are born at Antelope Park are separated from their mom at three weeks so that they can begin to form a human bond. This way, they are safer to handle in the various stages (as I’ve detailed below) and people can participate in activities with the lions. The lions that are raised at Antelope Park can never be released into the wild because they do not fear people. Instead, these lions are transferred to giant game reserves.

Stage 1: lions as young as six weeks are taken on walks to allow them to build their confidence in the African bush and allow their natural hunting instincts to develop; a necessary part of their pre-release training.

Stage 2: lions are given the opportunity to develop a natural pride social system in a minimum 500-acre enclosure. They will have plenty of game to hunt and will remain in stage two until they are socially stable and self-sustaining.

Stage 3: the pride is released into a larger managed eco-system where they will have to deal with competitive species such as hyena. The pride will give birth to cubs that will be raised in a wild environment, within a natural pride social system and with no human contact; making them effectively wild lions.

Stage 4: when old enough, cubs born in stage three can be released into the great wildernesses of Africa with all the skills and human avoidance behaviors of any wild-borne cub.

For better or worse, this seems to be the future of wildlife in Africa: game reserves, sanctuaries, and national parks. The greatest threat to the lion, like most other large, predatory wildlife, is human beings. Too often, local people clash with wildlife that hunt or forage on their farms, and kill animals that wander into boundary areas between reserves and villages. Lions are also vulnerable to human diseases, which they contract by eating contaminated domestic animals, like cattle. In this way, mass amounts of lions have died from AIDS and Tuberculosis. The population gets so small that it is further weakened through inbreeding.

Antelope Park currently boasts a population of 100 lions. Though the projects goals are noble, they have been in operation since 1995 – 22 years and not a single lion has been released. In the last eight years the stages mentioned above have been put into motion. Now they have a contract with a game park in Burundi, a country south of Rwanda. Burundi’s park can take three prides of six lions – or 18 lions total – upon completion (the park is still waiting for the rest of its funding – due next year). That still leave 82 lions without a place to go, and they are still breeding lions. Even with some new contracts in the balance, there are far more lions here than places for them to go.

That’s when I start to wonder about all those lions that don’t get to go to Burundi. They pace in their small pens, walking or hunting occasionally, with no release date in sight. The owners of Antelope Park plan to build a new fence around their property, which would expand the area for lion’s to roam and allow them to initiate Phase 3 of the stages program. However, they claim to need several million dollars for this fence – a hefty sum.

Late at night, sleeping in the tent, a concert of roaring punctuates the stillness. I feel like I’m living inside a real life Jurassic Park.

Conservation is always complicated. Add Africa to the equation, where things are several times more complicated than anywhere else in the world and the water gets murkier. Then add Zimbabwe, a poverty-stricken country where political corruption reigns supreme, and it seems like nothing short of a miracle that the park has made it this far.

But the question has to be asked: when does Antelope Park just become a glorified zoo? Would the 12-year-old lion that has spent his entire life in captivity rather fight for his life in the wild? A friend of mine described a wild lion he saw in a game park in Kenya, just after making a kill. The massive male strutted in front of their jeep. Each muscle, from the male’s shoulders to his haunches, rippled like a body builder flexing in the mirror. This lion, he said, was the true King of the Jungle.

Unfortunately, we can’t ask the captive lion how he feels, and we certainly can’t scratch him behind the ears.