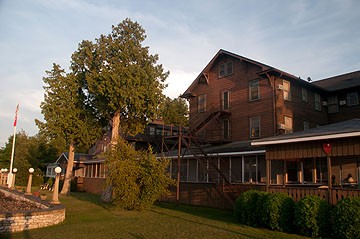 The main lodge of the Alpine Resort. John and Paul Bertschinger opened the resort in 1922. Photo by Taylor Schultz.

It’s early evening at the end of August, and the sprawling grounds of the Alpine Resort are emptying.

I stroll past the tennis courts and glance at the 30 family cabins in the distance, then at the image of Gus der Schweitzerboob at the entrance of the impressive 60-room lodge. The familiar sounds of dishes clanging rattle out of a small window in the kitchen of The Hof Restaurant, beneath the canopy of cedars that wrap the property.

It’s as though I have stepped into the set of the movie Dirty Dancing. 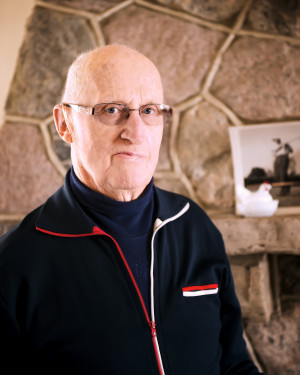 Bill Bertschinger, 83, still works dusk till dawn at the resort his family opened in 1922. Photo by Len Villano.

Inside is Bill Bertschinger, the workaholic owner, who has taken a break to chat with a writer who once spent summer days sneaking into his game room and jumping the fence to his pool.

I was deathly afraid of “Dollar Bill” back then, and to be honest, I’m still a little nervous at age 31 as I catch his eye and grasp his hand.

He takes me to the back dance hall (one of four) as a jazz band plays to a smattering of tables in the massive dining room in the lodge’s east wing, where the sun is well into its descent behind a long wall of picture windows.

We pass through the main lobby, past one of the bars, the empty game room, and walls full of historic photos of the lodge and Bertschinger family. There are not nods to the past here, this place is the past, a step back in time. We sit in a couple of the resort’s original rocking chairs and my host pops a video about the history of Egg Harbor into the VCR below a small television.

Bertschinger began working at the resort at age 12, when his father Paul Bertschinger bribed him into the business.

“He said if I picked up the laundry I could drive the truck,” he says. “Well, you tell a 12-year-old he can drive a truck, and you don’t have to tell him much more.”

Other than the 18 months he spent working for Uncle Sam in Korea, he has been at work here ever since. 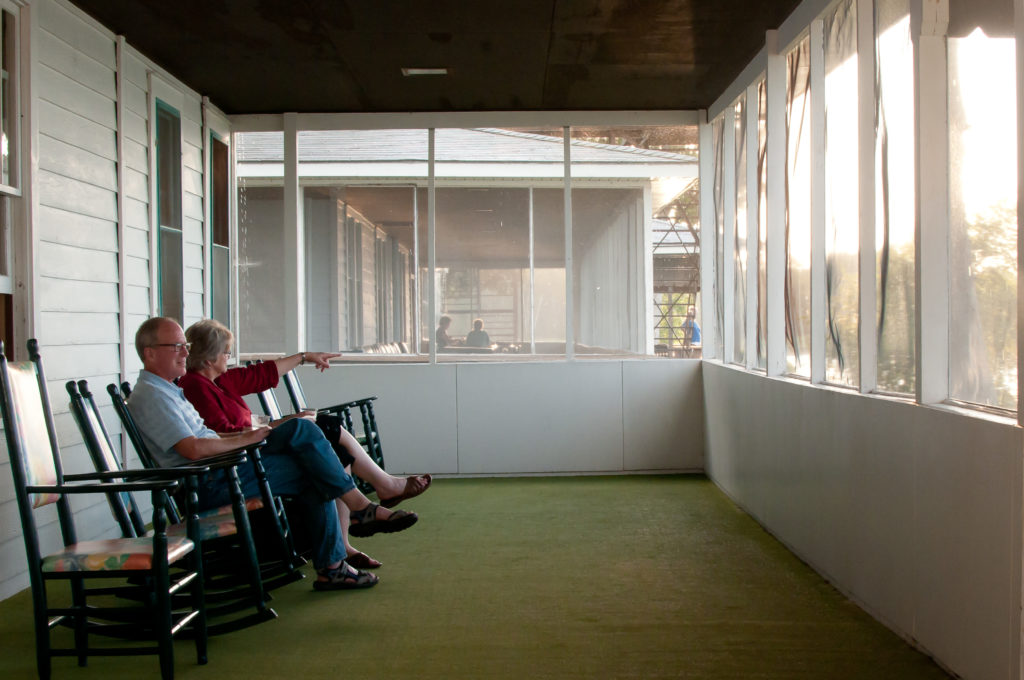 Randall and Wynne Moskop relax on the veranda along the shore at the Alpine Resort. Photo by Taylor Schultz.

“When I reflect on the Alpine all I think about is hard work,” he says. “We never asked anyone what our destiny was. We just figured we’d stay and help someone out around here. That’s not a complaint; it’s just the way it was. I always loved it, and I still do.”

Bertschinger begins his work day at 6:15 am. Now 83, he spends most of his time in the office but fills in everywhere, washing dishes, doing laundry, watching over the golf course. Each day he takes a mid-day break, then returns to work well into the evening, as late as 11 pm, with his wife Marie and daughters Emily, Christy and Cindy. A fourth daughter, Carey, comes up to work on weekends. Together they keep the family business alive.

Brothers John and Paul Bertschinger planted a family foothold in the town with farms, a lumberyard, and the Kewaunee House (now Shipwrecked) in the first years of the 20th century, but it was a property John once let slip away that became the family’s lasting footprint.

In 1912 John sold the stretch of waterfront property where the Alpine now stands to Ferdinand Hotz, a decision that didn’t sit well with Paul.

“You sold the best piece of property you’ll ever own!” Paul told him, and the two set to work to buy it back, which they did in 1914 – for twice what John had sold it for. 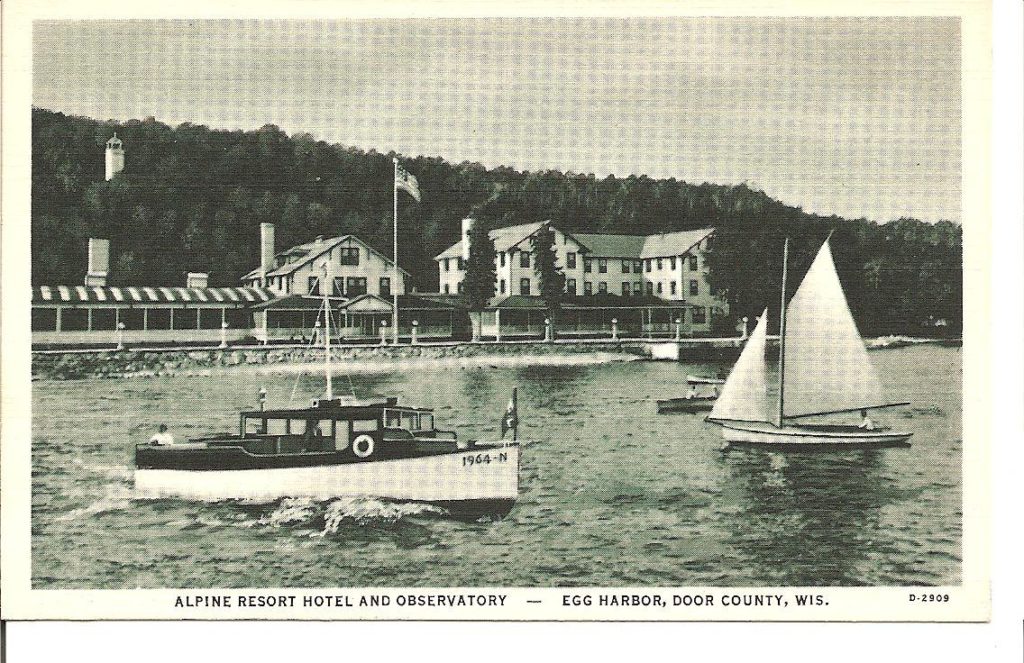 A vintage postcard gives a glimpse of Egg Harbor’s early days. The Alpine Water tower (upper left) was once a favorite adventure for summer kids.

The Alpine opened its doors in 1922, the first tourism-centered business in Egg Harbor, catering to vacationers that were a far cry from those of today. Electricity wouldn’t come until 1925, but the Alpine produced its own with a huge motor that powered 30-watt bulbs. The dirt roads of the time made for rough, slow travel, with many guests taking a steamship or train to Sturgeon Bay, then the yellow cab to Egg Harbor. After a long journey, travelers were invested in their vacation.

“We didn’t even let you in the door if you weren’t staying a week,” Bertschinger recalls. Today’s lodging establishments can scarcely ask for a two-night minimum. “Most people stayed at least two weeks, and it wasn’t unheard of for people to stay six weeks or more.”

Lodging was scarce in those early days, and Door County was not a destination for the average traveler.

“Back then only one percent of people in Chicago had the money to vacation,” he recalls. “It was not uncommon for cars to arrive here driven by chauffeur. Today everyone takes vacations, but it was the elite back then.”

The Alpine operated on the American Plan, in which the weekly rate included three meals a day served at set times, and the resort planned activities for kids and adults.

“The tables were designed for eight people, so you’d have four couples sitting at a table, getting to know each other and developing friendships that would last a lifetime,” Bertschinger says.

Most of the guests would attend the nightly dances, which became big events for local kids as well. Bonnie Cady, who spent her first summers in Egg Harbor with her grandparents at the Cupola House in the 1940s, remembers those dances as the place to be.

“I was on the ‘Townie’ side of the harbor,” she says, “and we never knew the kids on the ‘Point’ side.” The Alpine was at the crossroads of the two vacation communities and opened its beach and dances to them, Cady says. “For the Point kids and us Townie kids, it was how we met each other and made friendships. It made you feel like you were kind of part of it. I give Bill all the credit for that.”

In the middle of the century it’s estimated that as many as half of all resorts operated on the American Plan, today fewer than one in 10 offer the package. The Alpine still features bands every night of the summer, but the days of a full dance floor are long gone. People aren’t as social anymore, Bertschinger says. You can’t get two couples to sit together. The American Plan is a thing of the past.

“People don’t even know what it is,” Bertschinger says. 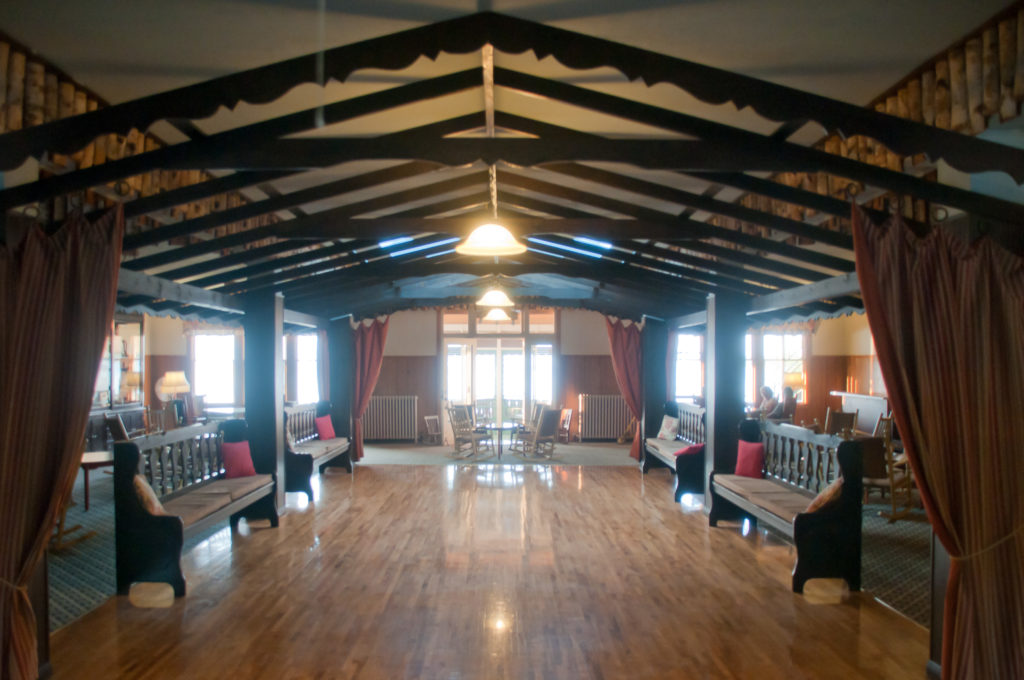 One of four dance halls at the resort, once filled by visitors staying on the American Plan and local revelers. It’s now filled regularly by wedding receptions at the resort. Photo by Taylor Schultz.

A storm rolls over the harbor as I find a table of five old friends enjoying cocktails on the Alpine’s veranda. Jan and Bill Larkin, Katie and Steve Webster, and Carol Taebel have been traveling to the Alpine from La Crosse for 12 years. Taebel and her late husband Dwane even spent their honeymoon here in 1957, staying in the Illinois cabin.

They used to stay at separate motels; then they found the Alpine.

“It turned out to be more fun to all be together at the same place,” Jan says.

For four nights they set up shop on the astro-turf carpeted veranda with their own cocktails, taking in the panoramic view of the harbor. The Alpine, they admit, may not have the updated touches of some places, but those places don’t have the Alpine’s charm, a feel that harkens back to Door County’s early tourism days.

“There’s a contrast between this and more modern places,” Jan says. “Sitting here, you just expect these old movie stars to come floating through. It’s like going back in time. It’s comforting, relaxed.” 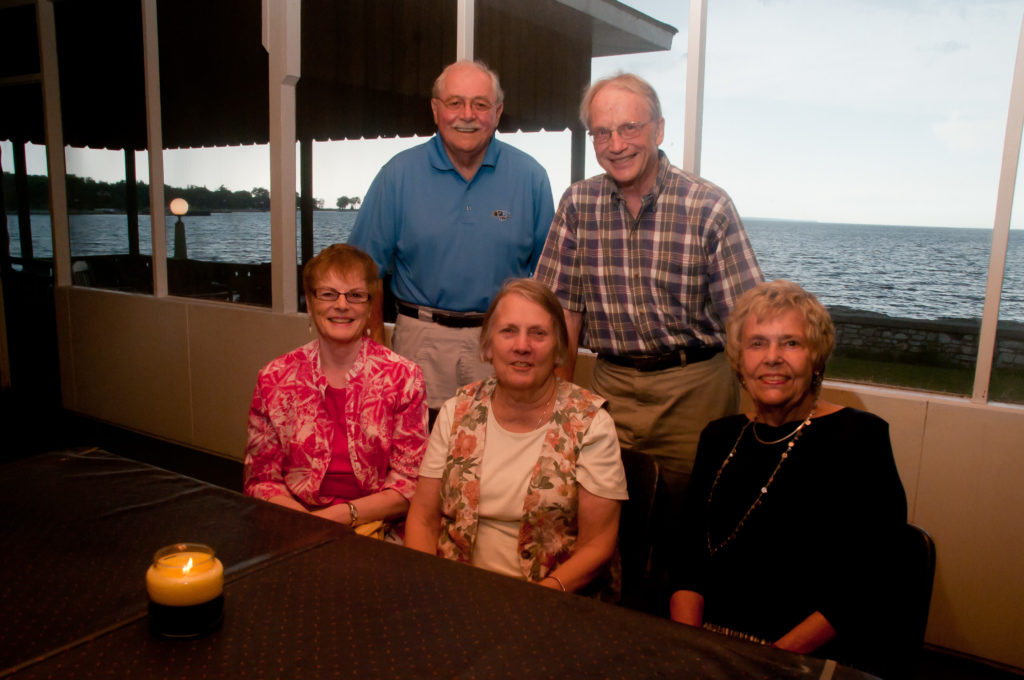 This group of LaCrosse friends returns to the Alpine every year to claim their table on the veranda and take in the resort’s throwback charms. (Back row, from left) Bill Larkin and Steve Webster. (Front row, from left): Jan Larkin, Katie Webster and Carol Taebel. Photo by Taylor Schultz.

Back when summers at the alpine were like a big family reunion Bertschinger says he never had to lock up the showcases or beer coolers. A simple “Keep Out” sign sufficed.

Times changed. The beer is now locked up, the average stay is three days, and tourists no longer expect to spend their entire vacation at one resort. It’s the way of the world, but Bertschinger, a no-nonsense man still a slave to work, allowed himself a dose of nostalgia. He remembered when characters and leaders like Chief Roy Oshkosh and Herman Birnschein helped define the town.

“Today it’s mundane,” Bertschinger says. “It was real back then. I’d go back to the olden times of Egg Harbor at the drop of a hat. We’ve done a real nice job of screwing it up.” 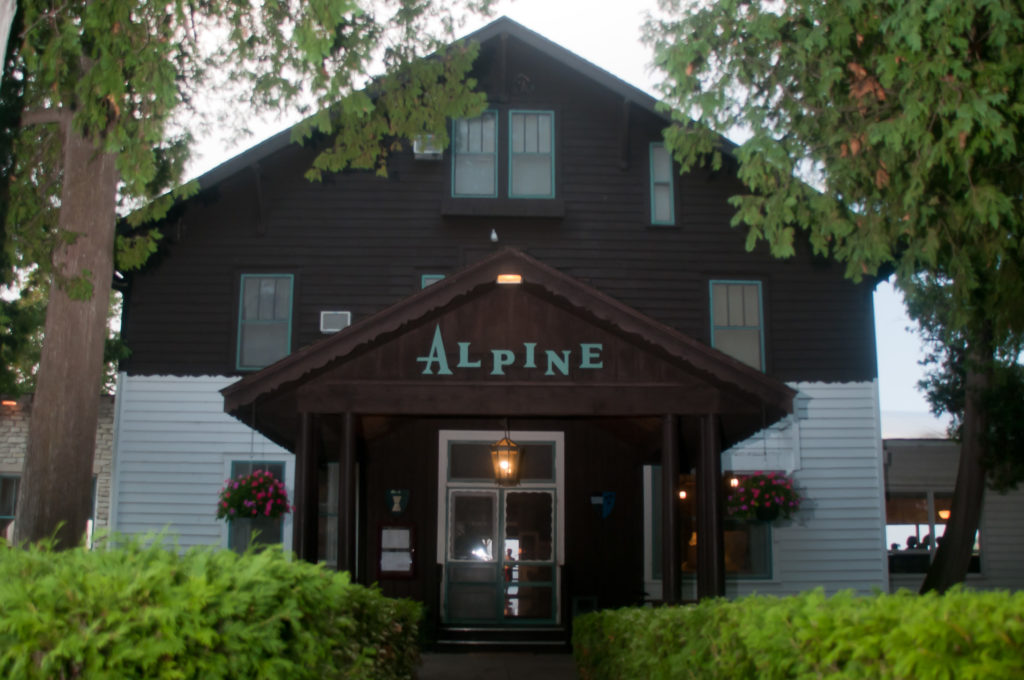 The entrance to the Alpine looks much as it did 90 years ago. Photo by Taylor Schultz.

After three hours Bertschinger tells me he has to get back to work. We head back to the main bar, where an old-style jazz band plays the Glenn Miller classic “Pennsylvania 6-5000” to an audience of two. The band is good, and I think it’s a shame there’s nobody here to enjoy it.

A few diners filter out the door. Bill follows, going back to work at 9:15 pm. We say good night quickly as he hops into his golf cart, speeding away to water the greens. I stick around and pull up a chair at one of the many empty tables to listen to the band a bit longer.

Summer number 89 for the Alpine Resort is almost over. The buildings, the smells, and the ambiance have barely changed, but so much of this town has.

It’s a genuine step back in time, and I’m grateful it survives, the ghosts of a Door County gone by dancing around me at the Alpine Resort, the last of its kind.