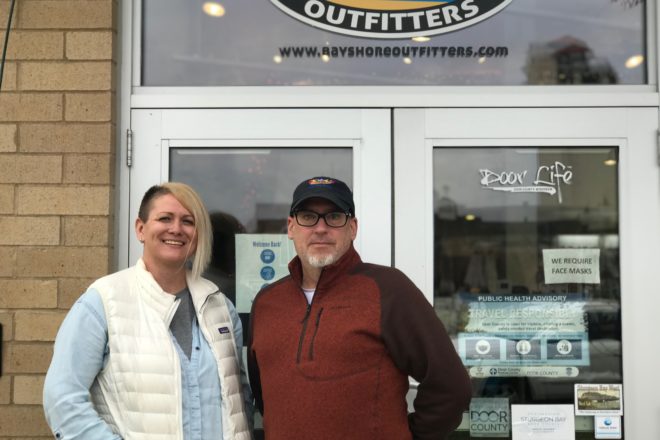 Julie Wilson and Mark Schuster, standing in front of their Sturgeon Bay store, became 50-50 partners of Bay Shore Outfitters on Sept. 30. The two will open a third store – the first is in Sister Bay – in Algoma in May. Photo by D.A. Fitzgerald.

It’s still possible to unearth positive stories beneath the rubble COVID-19 has deposited across the world.

One of those comes from Bay Shore Outfitters, the full-service outdoor recreation and retail business with locations in Sister Bay and Sturgeon Bay. Like many similar businesses, Bay Shore bucked any COVID-related slumps, finding success where preparation and opportunity meet.

“If you were going to write a book about what business to be in [during the COVID-19 pandemic], it would be an outdoor, bicycle, watersport-driven type of business,” said Mark Schuster, who owns the company with partner Julie Wilson. “We were positioned – all those types of recreational-based, outdoor businesses were positioned. It was perfect for COVID. Being socially distanced, spread apart, quiet activities.”

That’s not what they foresaw when they shut down March 17 to protect their staff and families from a virus that had begun to rile the country with its first stages of infection.

“Our biggest concern coming into the end of April was what’s going to happen,” Wilson said. “Are we going to have a business? How busy will it be? We just didn’t know.”

When they reopened their doors before Memorial Day weekend, people poured in who had escaped their homes for a drive-to destination offering abundant opportunities for outdoor, socially distanced activities.

“It was like someone opened up the floodgates,” Schuster said.

Inventory flew off the shelves, particularly paddle-sports equipment, which saw an industry-wide supply crunch. At season’s end, when Schuster and Wilson perennially sell all their rental kayaks and paddle boards, customers snatched up every last piece of the used equipment, and Bay Shore Outfitters concluded one of its best seasons ever.

“It’s hard to say that for us because we know so many other people suffered,” Wilson said.

Far from earning them bragging rights, the sensational season humbled them. They give most of the season’s credit to their staff, their customers and the local organizations that kept them abreast of financial programs that allowed them to bring their employees back and invest in their company’s future.

“There’s survivor’s guilt in some ways,” Schuster said. “We were in the right industry.”

Schuster joined Bay Shore in 2004, Wilson in 2012. But the company traces its beginnings to 1980, when Peter Parsons and David Zasler first began offering catamaran sailboat tours. The duo added a third partner, Rick Wylie, and branched out to provide a multitude of land and water recreational opportunities.

The company opened its first retail store in Sister Bay in 1999, with the soft goods functioning perhaps as more of a sidebar to the primary business of renting and selling equipment. Then Schuster was hired as a buyer.

“I brought in new lines, different lines, when it came to clothing and accessories,” he said. “I figured that’s why they hired me. I positioned our business in a different light: not directly related so much to hard goods, kayaks and camping equipment, which is important. But in some ways, that’s a hook for what we do more business in, which is our soft goods.”

Expansion came a decade later with a second location in Sturgeon Bay. Along the way, Parsons and Zasler were bought out of the business, and Schuster and Wilson bought in. Both were born and raised on the peninsula and have deep roots that sink back generations.

“They’re excellent,” Rick Wylie said about the two. “They have the same cultural Door County instincts. That’s what it was all about: to find somebody to continue and grow the business with Door County people.”

The company is now preparing to branch out again with a third location in Algoma that will open in May in the former James May North gallery building on State Street.

“I’ve always thought Sturgeon Bay and Algoma are bookends that aren’t used well enough together,” Schuster said. “We have this underutilized trail system called the Ahnapee Trail and Ice Age Trail, and they share the same ground. And there has to be a way to use those well.”

The expansion plans do not include Wylie. In another turn during a year of many, Schuster and Wilson bought out Wylie to become 50-50 owners – a decision that had been discussed for awhile. The deal was officially sealed Sept. 30.

The partners are hedging on a good 2021 as they buy for the new season and prepare to open a new store, though the “What now?” still hangs like a question mark over everything following a year when a global pandemic distanced the country and a presidential election divided it.

But standing still for what comes next is not in the mission or business model of Bay Shore Outfitters.

“You get complacent in retail, you die,” Schuster said. “You have to change. You have to evolve and grow.”