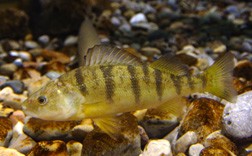 “Is the perch in your fish fry lake perch or ocean perch?”

I would get this question from time to time while serving diners at Husby’s and the Sister Bay Bowl years ago. Back then I wasn’t very concerned about where the fish came from, but I assumed it was coming from the waters of Lake Michigan, since perch is the first fish I remember catching off the dock in Egg Harbor.

“For most of the last 30 years the majority of perch served in Wisconsin has come from Lake Erie,” said Dan Schwarz. Schwarz, founder and owner of Dan’s Fish, Inc., in Sturgeon Bay, has been supplying fish to local restaurants and wholesalers for 34 years.

Lake Erie has become an even more important supplier since 1996, when the Wisconsin Department of Natural Resources halted commercial yellow perch fishing on Lake Michigan due to its rapidly declining population. In 2007, 94 percent of all yellow perch harvested on the Great Lakes came from Lake Erie.

Experts suspect that perch are yet another victim of the zebra and quagga mussel invasion of the last two decades. Those mussels have changed the ecology of the lake, limiting the food sources for perch.

Cormorants, which have made a tremendous resurgence on the islands surrounding the Door Peninsula, are also suspected to have a role in the decline of the perch population.

Whatever the cause, the effect has been dramatic. An estimated 24 million perch populated the Wisconsin waters of Lake Michigan in 1990. The latest estimates put their population at less than 1 million – and dropping.

Commercial perch fishing is now allowed only in Green Bay. The perch population in the bay is much better than in the rest of the lake, but it’s still nowhere near strong enough to support the perch cravings of the state. The commercial fishing limit for yellow perch in Green Bay is just 100,000 pounds.

“That’s enough fish for about one week of fish fries in Wisconsin,” Schwarz said.

Meanwhile, the 2014 yellow perch quota for Lake Erie is set at 11 million pounds, much of it coming to tables in Door County.

“Young perch eat zooplankton and other small aquatic organisms that have become much more difficult to find now,” he said. “They hatch with a yolk sac that sustains them for there to five days, then they are on their own and they can’t find food.”

This makes perch stocking more complicated than salmon or trout, Eggold says. To have any chance of surviving, the perch would have to be stocked when they’re significantly larger, at least three to four inches long. There have been successful hatches of perch in recent years, but they don’t survive beyond a month. Stocking larger fish would cost an estimated 75 cents to $1 per fish, with no guarantee that they would survive.

But the DNR has stocked non-native salmon and trout for nearly 50 years at great cost. Recent stockings are smaller than historical averages, but the DNR will still stock 800,000 Chinook salmon, 400,000 Coho salmon, 300,000 rainbow trout, and 800,000 brown trout this year.

Many anglers and commercial fishermen alike question why the DNR goes to such great lengths to support a non-native sport fishery but won’t invest in stocking the native and highly coveted yellow perch.

Eggold said there are challenges beyond cost. Officials doubt whether even larger perch would survive in significant numbers.

“Perch are lower down the food chain and have a lot of predators,” Eggold said.

Eggold said you would need to stock many times more perch than salmon to have a chance to make an impact on their numbers.

“If we stocked a million perch this year, I don’t think you’d even notice it,” he said.