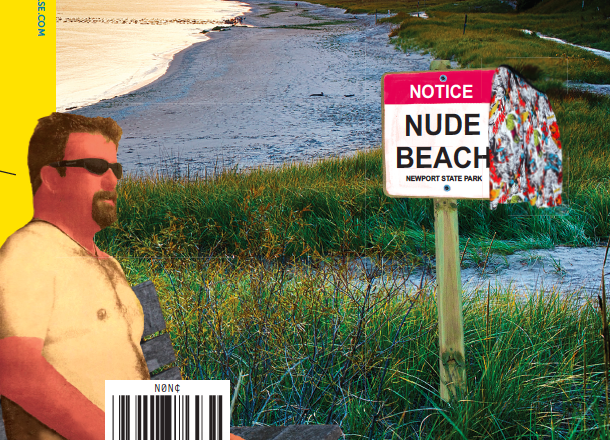 At the end of my conversation with Newport State Park superintendent Michelle Hefty in her office for the fall issue of our sister publication Door County Living magazine, I asked her the standard final question for interviews as a journalist: Is there anything I’m missing?

After her universal response that she had just been blathering and hopefully I found something useful, she brought up the 2016 Peninsula RePulse, the April Fool’s edition of the Pulse. The cover featured a photoshopped nudist sitting on a bench overlooking the beach at sunset with a sign that said “Nude Beach, Newport State Park.”

“There was a publication out that was like the world recreation guide to nude beaches,” said Hefty, remembering back to the late ‘80s and early ‘90s when she first started at the state park. “Newport and Toft Point were in there. We’d be walking Europe Bay beach and the standard was, ‘Despite what you read or heard, this is not a clothing-optional beach, it’s a family beach. You’re either going to put your clothes on or you’re going to leave, or I’m going to write you a ticket.’”

Although Hefty believes she has a photocopy of the original page somewhere in her stacked filing cabinets, she has not been able to track down the publication that sent the nudists to Newport.

“I cannot find it anymore, anywhere, anything.”

My paperback copy of Lee Baxandall’s World Guide to Nude Beaches and Recreation landed in my PO box about two weeks after meeting with Hefty. Despite the sensitive content, I opened the full color and full frontal pages right there on the post office counter and went to the section on Wisconsin. There were no Door County locales to be found.

Heading back to the internet, I learned I had purchased (for one cent and $3.99 in shipping) the second edition of Baxandall’s travel guide. It must be in the first edition of the book, published in 1980. The first edition was nowhere to be found.

A quick search for Baxandall brought me to The Naturist Society, which Baxandall founded in 1980 after years of being involved in the “free beach” movement. I assumed he was a West Coast hippie, floating around shorelines in the nude while waiting to get kicked out. But Baxandall is an Oshkosh native and the Naturist Society headquarters remain in his hometown, at the mouth of the Fox River on the shores of Lake Winnebago.

I emailed their offices, hoping they could help me track down a copy of Baxandall’s first publication, which must hold the pages of Newport and Toft Point. The managing editor responded and told me that several years ago, there was one selling on eBay for $100.

Detailing this treasure hunt during one of our editorial meetings, our Arts, Entertainment & Literature Editor Alyssa Skiba sent me the link to the website that eluded me.

A clothing-optional swimming area in Brillon, Wis. compiled all of Baxandall’s northeast Wisconsin locations on their website.

Under the section for Lake Michigan sites, it reads:

Door County is Wisconsin’s thumb in Lake Michigan. And Newport State Park is at its northeast tip, one-hour drive north of Sturgeon Bay. Newport State Park rangers don’t bother discreet skinny dippers at Europe Bay. Food and lodging nearby. Roads are less crowded on weekdays. Drive to Ellison Bay then east on Route 42 and where it again swings north, continue east on Europe Bay Road to its end; park. Walk to the shallow Europe Bay, then north (left) to the seclusion of fallen trees where the beach is the best. Behind this beach is Lake Europe, warmer than Europe Bay with a shallow sandy bottom. Bring a float.

Hefty said the instructions were spot on.

For more on Hefty’s 28-year career at Newport State Park, pick up a copy of the autumn 2017 issue of Door County Living, on newsstands now.