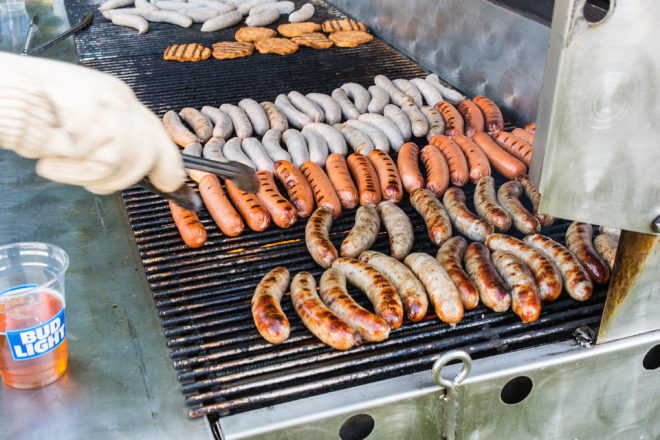 Nothing says Independence Day like burgers and brats, and this weekend, each celebrating town is putting its best foodie foot forward with featured purveyors of all things fried, grilled, smoked and flavorful. Here are just a few of the special offerings you can find.

Sturgeon Bay will pull out all the stops. The Dog House will provide cheese curds, hot dogs, burgers and brats, and alongside it will be Gourmet Corn, serving a variety of Mexican street corn; Jolly’s Street Pizza; Kitchen Barons; Cowboy Kettle Corn; and the Dough Shoppe, offering cookie-dough scoops, cookies and shakes. Destination Sturgeon Bay will have wine, beer, soda and cherry sundaes to keep everyone satisfied.

The Baileys Harbor Fire Department will host its pancake breakfast bright and early at 7:30 am. Then you’ll be able to pick up cinnamon rolls and pecan rolls at 11:30 am, plus popcorn and walking tacos starting at 6 pm, at the Immanuel Lutheran Church. Plus, the Baileys Harbor Fish Company will have smoked fish and spreads at the visitor center.

Look forward to two days of food in Egg Harbor, courtesy of the Egg Harbor Men’s Club and Buttercups Coffee on July 3 before the fireworks, and the Egg Harbor Historical Society on July 4 after the parade.

In Kewaunee, the Muskrat City Sportsman’s Club will serve up brats, burgers, hot dogs and a Wisconsin favorite – a fish fry – starting at 11 am.

Shoreline Restaurant will provide barbecue pork, plus mac and cheese in a cup, at its tent in Gills Rock; and Mark Weborg and volunteers will be raising money for the Death’s Door Maritime Museum with whitefish sandwiches and cheese curds. Top of the Thumb will be selling popcorn, and Charlie’s Smokehouse will have ice cream fans covered.

Not going to be here this weekend? No problem! The Sister Bay Lions Club will continue the festivities with its Freedom Fest in Sister Bay on July 10, offering hot dogs, hamburgers and a brat fry.

Craving something different? The Belgian Heritage Center in Brussels will cook up plenty of traditional booyah July 4, 11 am – 1 pm, and sell it in bowl, quart, two-quart and gallon containers – whatever you need to satisfy your booyah yearnings. You can even order it in advance at belgianheritagecenter.org.