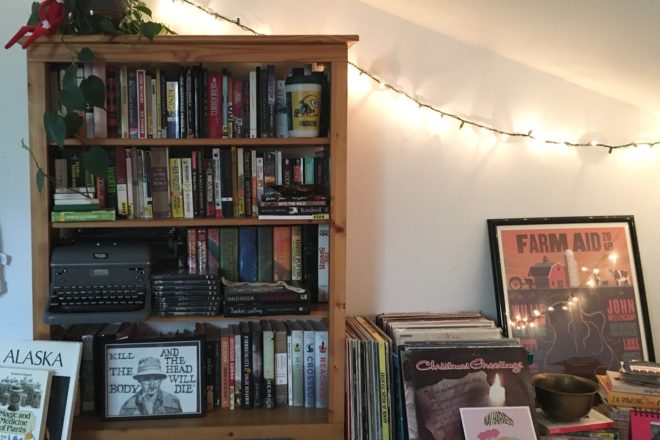 Consult your bookshelves for some reads you haven’t gotten to yet. Photo by Celeste Benzschawel.

There are a lot of things that aren’t easy right now, and a lot of us need some distraction. There are also a lot of ways to stay busy during a quarantine (did I just say “a lot” three times?), some of which include binge-watching TV programs, consuming movies, reading, and listening to podcasts. In case you need some suggestions, I put together a short list for each category, but of course, there are a lot (let’s make it four times!) more great options than the ones I’ve provided below.

• Tiger King (Netflix): Almost everyone who’s been on the internet during the past two weeks has heard of this show. It’s become the escape we’ve all needed, including the memes that have resulted. It’s a docuseries about animal rights, murder, love, drugs, cults and more. All I can say is, if you turn on the first episode, you won’t turn it off until you’ve finished all seven.

• Unbelievable (Netflix): What’s unbelievable is that that I didn’t know about this show sooner. In it, a pair of female detectives and their teams join forces to catch a serial rapist who commits crimes throughout Washington and Colorado. One thread follows a victim whose story gets turned upside down. If you like crime shows, you’ll like this one. The injustices in this story are frustrating and painful to see, but it’s important to watch. Unbelievable is based on a true story.

• Feel Good (Netflix): This show draws on the experiences of comedian Mae Martin, who plays herself living in London. She struggles with sobriety and dating a woman who has dated only men in the past. It’s a quick watch and quite funny and real.

• The Stranger (Netflix): Everyone needs a good drama series once in a while. The Stranger is a show about secrets. An anonymous individual starts to expose the town’s secrets for money and revenge; everyone begins to fall apart; and tragedies ensue.

• Locke & Key (Netflix): In this a horror show, the Locke family moves back to the father’s childhood home after his death. The family members discover magical secrets – all hidden in the house’s keys – and find out that a demonic entity is also in search of the keys, which, you know, isn’t going to make for easy going. The show is kind of childish, but if you’re a fantasy fan like I am, you’ll find it super fun.

• Escape from Pretoria (Rent, 2020): This is the true-life story of two white South African prisoners who were arrested after distributing political pamphlets on behalf of banned organizations during the apartheid era, but they eventually escaped from prison. It’s sort of a stressful movie to watch, but it’s amazing.

• The Lord of the Rings film series (Rent, 2001-03): Now is the perfect time to watch the extended versions of this classic fantasy series about an epic adventure in Middle-earth to find and destroy the One Ring and its maker, Lord Sauron. Three films tell the tale: The Fellowship of the Ring, The Two Towers and The Return of the King. The extended edition of movie one is more than three hours long, with 30 additional minutes; movie two is almost four hours, with 45 additional minutes; and movie three is a little more than four hours long, with 51 additional minutes.

Here’s a trailer for the first film:

• Captain Fantastic (Hulu, 2016): This is about a family that lives deep in the Washington wilderness. The children don’t attend school, and instead, they learn survival skills, do fitness training and live with nature. But when their mother dies, their lives turn upside down, and they must interact with the rest of the world. This really tugged at the old heart strings.

• Horse Girl (Netflix, 2020): In this film, an introverted woman works at a craft store and loves to visit her childhood horse. As the story progresses, she spirals into an altered mental state as she deals with her mother’s suicide the year before and the mental illness that both her mother and grandmother experienced. It’s uncomfortable and dark at times, but it also has comical elements. It’s an interesting take on mental illness.

• The Stand (1978): “If you really want a pandemic book, and it’s a big one, read The Stand by Stephen King,” said the Peninsula Pulse’s own Steve Grutzmacher. “The disease is called ‘Captain Trips’ by the public, but it is actually a weaponized influenza strain that kills most of the world’s population. The bad guy, Randall Flagg, plays a central role in the second half of the book.” I can confirm that it’s excellent, and it remains one of my favorite books.

• Wild: From Lost to Found on the Pacific Crest Trail (2012): This is a memoir by Cheryl Strayed, who hikes more than 1,000 miles of the Pacific Crest Trail – alone and with no training – in a last-ditch effort to heal after her mother’s death, her run-in with drugs and a marriage that’s ended. I read this after seeing the film in theaters, which left me in tears. The book is just as tough, sad, inspiring and beautiful as the 2014 film.

• Love in the Time of Cholera (1985 in Spanish, 1988 in English): According to the shortened version of Goodreads’ summary, this book is about a young couple that falls passionately in love. The woman decides to marry a wealthy doctor instead, while the man continues to love her despite numerous affairs. After the woman’s husband dies 50 years later, the couple reconnects.

Here are some more titles that I’ve fallen in love with:

• A Sand County Almanac: And Sketches Here and There (1949) by Aldo Leopold

• Their Eyes Were Watching God (1937) by Zora Neale Hurston

• And I Don’t Want to Live This Life: A Mother’s Story of Her Daughter’s Murder (1983) by Deborah Spungen

• RISK!: I’ve been captivated by this podcast – and by its host, Kevin Allison – all summer and into the winter. The premise here is that “people tell real stories they never thought they’d dare to share.” Any topic that you could think of has been covered by real people sharing real stories about their lives. They’re crazy, heartbreaking, hilarious, sexy, dangerous, scary and touching all at once. It’s a great distraction from your own life, but also a reminder of the human condition that we all share.

• Morbid: This podcast is one for weirdos, according to its bio, and I’m one of them. This is a true-crime podcast that discusses serial killers, unsolved mysteries, history and the paranormal, all through research and respectful humor.

• All Songs Considered: This NPR podcast highlights new music, including song clips and interviews with artists. It offers a New-Music Friday edition during which they share a list of songs that came out that day. It’s a great way to stay on top of music trends and make new discoveries.

Here are more podcasts worth checking out:

• And That’s Why We Drink (True crime, paranormal)