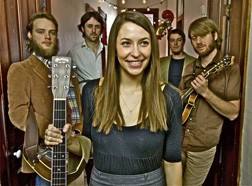 Lindsay Lou & The Flatbellys opened the series on Nov. 7.

Innkeeper Andy Coulson, a banjo player and long time fan of live acoustic, folk and bluegrass music, started the White Gull Inn concert series in 1984. Coulson recently reflected on the scarcity of live music during the long quiet Door County winters back then.

“I thought the White Gull dining room might be the perfect venue for folk music,” explained Coulson. “The first White Gull concerts were loosely based on the ‘house concert’ concept, in which traveling folk musicians, often on tight budgets and in need of work, are invited into the homes of fans along the route of their travels. The fans provide the musician with food and lodging in return for a concert to a small group of friends, often right in their living rooms. A collection at the door goes to the artist to help defray expenses.”

In the beginning, it was not easy finding artists willing to come so far for such a small turnout; however, as word got around, more and more musicians decided that a “working holiday” on the Door Peninsula was worth the trek to northern Wisconsin. The series has gradually been able to attract well-known performers such as Wilcox, Tom Paxton, Cheryl Wheeler, and John McCutcheon.