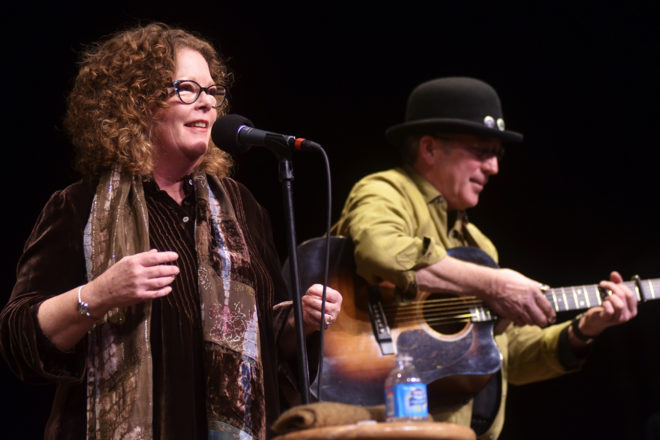 Mollie O’Brien and Rich Moore will be featured at the first concert in the 35th season of winter folk concerts at the White Gull Inn in Fish Creek on Nov. 7 at 8 pm.

Mollie O’Brien is an Americana, bluegrass, R&B, and folk singer from Wheeling, West Virginia. She has released a number of Americana albums with her brother, Grammy winner Tim O’Brien. She has also released five solo albums. She is currently based in Denver, and regularly tours and performs with her husband, guitarist Rich Moore, as a duo. Together they have released one studio album, Saints and Sinners and a live CD, 900 Baseline.

As songwriters, O’Brien and Moore add their own tunes to the canon of American roots music they inhabit and show us they’re completely at home with their musical selves. O’Brien has long been known as a singer who doesn’t recognize a lot of musical boundaries, and audiences love her fluid ability to make herself at home in any genre while never sacrificing the essence of the song she tackles. Rich, while known to produce some of the funniest onstage running commentary, is also a powerhouse guitar player who can keep up with O’Brien’s twists and turns from blues to traditional folk to jazz to rock and roll.

An optional, pre-concert, fixed-price dinner will be served at 6 pm. The menu includes shepherd’s pie served with mushroom-shallot gravy and crusty French bread; mixed greens topped with apple, toasted walnuts, blue cheese and maple-mustard dressing; and apple cake à la mode. Concert tickets are $22. For tickets or more information, call 920.868.3517 or visit whitegullinn.com. If still available, concert tickets can be purchased at the door, although many concerts sell out.