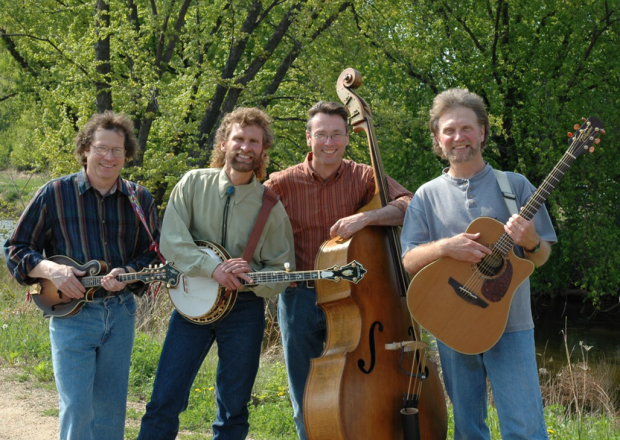 String Ties calls the hills of the upper Mississippi home, blending bluegrass, old-time country, swing, gospel and folk into an engaging version of acoustic music, evoking nostalgia, love lost and found, moonshine hills, and sturdy shoes on a barn dance floor. This bluegrass band, together since 1998, consists of Larry Dalton on standup bass, Wayne Beezley on mandolin, Tommy Pfaff on the five-string banjo and Dan Sebranek on guitar.

A native of the Chicago area and an alumnus of the Michigan State University Jazz Band, upright bassist Larry Dalton’s music career has spanned big band, classical, rockabilly, folk, and jazz, as well as bluegrass. His moment of international fame was a brief appearance on the Gong Show (gonged by Jamie Farr of MASH). Larry has been featured in jazz groups with Bobby Lewis, Mary Louise Knutson, and with brother Bert Dalton in the Dalton Brothers Trio. He has appeared at the Winnipeg Folk Festival, the Woody Guthrie Festival, and other venues backing Larry Long, sharing the stage with Pete Seeger, Arlo Guthrie, Peter Ostroushko, Debbie Duncan and Prudence Johnson. Larry has also recorded with Ariane Lydon, Lynn Biddick, Bryan Sirchio, Hans Mayer and Clay Riness.

Tommy Pfaff has been stuck on the banjo since he began chording Tin Pan Alley tunes on his grandma’s little old banjo uke. From those early Dixieland roots sprang the bluegrass style of banjo that Tommy has played and taught for more than 30 years. Along the way, he has shared the stage with musicians of every stripe: country, rock, folk, blues, Dixie, jazz and polka.

Wayne Beezley grew up in Paonia, Colorado, where he started listening to bluegrass and old-time music when he was about 11 years old. The family had an old “tater bug” style mandolin hanging on the wall, so Wayne got it down and started plunking around on it. He played with the Colorado-based bluegrass band Monroe Doctrine, through which passed such notables as Charles Sawtelle, Danny Weiss, Tony Trischka, and Mark Hembree. Wayne moved to the Winona, Minnesota area and expanded his musical horizons with the country-rock band North Country Band, and stretched out even further with a jam band called WEDG. He currently plays with String Ties and the Bus Boys.

Dan Sebranek started playing four-string banjo at the age of 10. After a couple of years he switched to the electric guitar. He eventually added the acoustic guitar to his repertoire and began traveling across the nation. Dan spent three years traveling the road with Bill Miller. Later he became an integral part of several bluegrass/newgrass bands.

Tickets for the 8 pm performance are $20. Tickets and more information on the concerts and the optional dinners can be obtained by calling the White Gull Inn at 920.868.3517 or toll free 800.624.1987, or online at whitegullinn.com. If still available, concert tickets can be purchased at the door, although many concerts sell out, so advance ticket purchase and reservations for the pre-concert dinners are recommended.