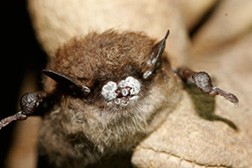 The lethal bat disease known as white-nose syndrome (WNS) has been found in Door County.

The Wisconsin Department of Natural Resources just released the results of its winter surveillance of 75 bat hibernating sites throughout the state.

“This was not terribly surprising but it is very disappointing,” said Owen Boyle, DNR species management section chief.

Since all the other infected bats and sites are in southwestern Wisconsin, Boyle said it’s likely the infection found at Horseshoe Bay Cave in Door County is from Michigan’s Upper Peninsula, where he said WNS is rapidly spreading.

The Michigan Department of Natural Resources reported earlier this year that the first batch of dead bats from WNS were found near the opening to an abandoned copper mine in Keweenaw County in January.

The syndrome was first detected in Wisconsin in Grant County in March 2014. Since then, Grant County has experienced an overall bat population reduction of 70 percent from pre-syndrome estimates. At this time, this is the only affected location with a noticeable difference in population resulting from white-nose syndrome.

Although winter hibernation is over, the DNR will continue to review public reports and respond to wildlife mortality events in order to monitor the health of Wisconsin’s bat population.

White-nose syndrome is a deadly bat disease that, among other things, can cause bats to frequently wake from hibernation. This can deplete energy reserves and lead to starvation and dehydration, or death due to exposure before the end of winter. WNS does not affect people or other animal groups. 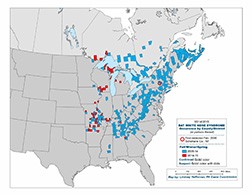 “We are still hopeful the research will produce some kind of treatment,” Boyle said. “It’s kind of a long shot to think there’s a cure, but research may find a treatment to help them resist.”

Efforts to control the human-assisted transmission of the fungus remain in place, including strict decontamination requirements for researchers and cavers, and efforts to educate commercial cave and mine visitors to help ensure they do not transport the fungus to other caves or mines.

“The most important thing that people can do regarding white nose syndrome, if they do spend time underground in caves or mines, be careful about decontaminating clothes and gear they bring underground, and having dedicated equipment for different sites,” Boyle said. “It has been shown the fungus can spread quite easily through clothes and equipment.”

Citizens can help by continuing to avoid disturbing bats, especially during hibernation. It is important to remember that visitors to caves and mines could potentially transfer the fungus between sites, regardless of whether bats use the site for hibernation. If you are planning to visit a cave or mine, be sure to check with cave owners and follow white-nose syndrome procedures in place at any specific site.

People who observe sick or dead bats, especially between October and March, are encouraged to report them to DNR. A reporting form and instructions for how to safely collect carcasses of dead bats can be found on the department’s Wisconsin Bat Program website (wiatri.net/Inventory/Bats).

“You can also help by building a bat house and putting it up in a location that’s likely to be good for bats,” Boyle said. “All that information is on the website.” (dnr.wi.gov/topic/wildlifehabitat/bathouse.html).