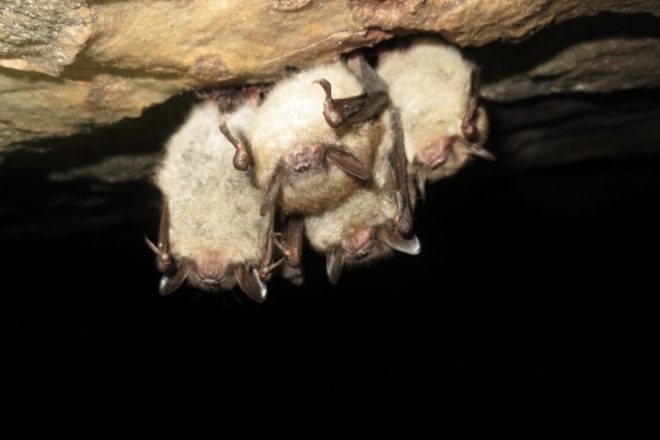 Researchers want to know whether the Door County bat population stands any chance of rebounding, but high groundwater levels during the late fall of 2020 prevented biologists from completing a count of the bats in Horseshoe Bay Cave, south of Egg Harbor.

The population of bats that hibernate in that cave – one of Wisconsin’s longest, at approximately 3,100 feet – has declined rapidly since the 2015 arrival of white-nose syndrome, a fungal disease that has killed millions of bats in North America. White-nose syndrome is present in Horseshoe Bay Cave, so it remains closed to the public as a measure to limit the spread of the fungus that causes the disease.

Affected bats awaken from winter hibernation, expend too much energy looking for food or water, and often die from starvation and dehydration.

For the decade ending in 2020, white-nose syndrome has caused the population of Midwest cave bats to crash by a cumulative 97%.

Although population numbers in Door County are unknown at this time, Virginia Tech researchers released a January 2021 report with some encouraging national trends: bat populations have been stabilizing or increasing in some of the nation’s cold cave locations.

But the report also found a discouraging fact: Bats tend to choose warm rather than cold caves for their hibernation sites, and the fungus grows more easily in warm caves.

One of the Virginia Tech researchers, assistant professor of biology Kate Langwig, said many people have fond memories of bats flying around and catching insects above lakes, rivers and fields on summer nights. Now, seeing a bat is becoming rare. Some scientists predicted in 2016 that if bats did not develop resistance to the fungus, 99% of certain species would be eradicated by 2030.

“It’s just been devastating,” Langwig said. “It’s really unusual in wildlife circles to have a decline of a species or a taxa that wasn’t considered vulnerable.”

Langwig answered some questions about the Virginia Tech studies and findings.

Peninsula Pulse (PP): What do the researchers do when they come to Horseshoe Bay Cave, and why were they unable to complete a count in late fall?

Kate Langwig (KL): During those visits, we count the bats, and then we take samples to test for the fungus that causes white-nose syndrome. It’s a long cave, and the majority of the bats usually are pretty far back in the cave.

The water levels in the cave rise and fall. This fall we were unable to access deeper parts of the cave, so we didn’t count bats during our visit – not necessarily because they weren’t there, but because we couldn’t access them. Usually we are able to get a count about once a year.

(PP): What trends are you seeing in Wisconsin?

(KL): There were massive declines in bat populations in Wisconsin – upwards of 95% in many species of bats. Most dramatically impacted probably are the northern long-eared bat and the little brown bat. This species has declined by more than 96% across the state.

In Wisconsin, we’re not seeing huge evidence yet that populations are stabilizing, although declines of bats are decreasing. The first year the pathogen arrives, there is actually very little mortality. The year after that – after the disease establishes in a site – the average decline in that year is about 70-80%. We’re still seeing fairly moderate decreases in Wisconsin.

(KL): In other parts of the Midwest, it seems a little bit more promising that sites are more stable, even with white-nose syndrome. We think it’s in part due to environmental conditions in the caves.

(PP): Is Horseshoe Bay Cave a warm or cold cave?

(KL): Horseshoe Bay is right in the middle. The cutoff for what I consider warm is about 8 degrees Celsius [46.4 Fahrenheit], and Horseshoe Bay is about 7.5 C [45.5 F]. It remains to be seen what will happen there.

It’s hard to say for sure the trends for Horseshoe Bay Cave because of the inconsistency of the counts. From counts and banding, we’ve seen relatively consistent recaptures at Horseshoe Bay, which suggests the cave may be moving toward a more stable population. But I think we need more data to be able to see that more.

(PP): Where are those cold caves in the Midwest?

(KL): It’s caves mostly in Michigan where the populations have stabilized. Part of that may be a time story. White-nose syndrome has been in Michigan longer than Wisconsin, so it’s easier to detect that [stabilization].

(PP): Can bats develop immunity or resistance to white-nose syndrome?

(KL): That’s one of the things we’re trying to determine from our study. Just how much of it is the temperature of the cave, and to what extent are bats themselves “special”? Are we seeing patterns of disease intensity reducing over time, which would be a signature that bats are evolving resistance?

(PP): What do you mean by bats being “special”?

(KL): Some people are better at producing certain antibodies; we don’t know the mechanism in bats. We do know some bats are better at reducing the fungal loads over the winter than some other bats. We’re trying to determine that some bats have more of a special attribute that allows them to have less fungal growth.

Bats are pollinators and seed dispersers for many plants, major consumers of agricultural and forest pests, and predators of biting insects. They also play an important role in reducing the risks of insect-borne diseases such as West Nile virus. Source: Wisconsin Department of Natural Resources.

White-nose bat syndrome was first detected west of Albany, New York, in 2006. Within 10 years, bats with the disease had been found in 26 states and five Canadian provinces, and the fungus had been found in four additional states.