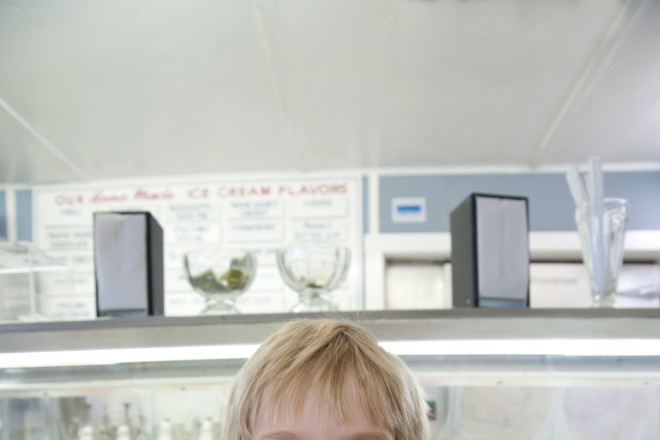 If you ask Todd Frisoni, owner of Door County Ice Cream Factory, on the corner of Beach Road and Highway 42 at the north end of Sister Bay, how he came to own the business, he is apt to reply, “The process was interesting,” and then smile.

Todd’s appearance doesn’t remotely reflect his 33 years of age, and when you watch him bustling about his restaurant and witness his enthusiasm for his products and his customers, it is easy to assume that he is at least a decade younger. Add to this appearance the fact that this year marks his 12th season as owner of the Door County Ice Cream Factory, and you may well be left scratching your head in wonder.

How Todd came to own this Door County destination is a story he tells with practiced ease.

“My parents have a place on Beach Road and my family spent our summers on the peninsula,” he begins. “When I was 15 I walked in to the Door County Ice Cream factory and applied for a job.”

Todd spent the next six summers working at the Ice Cream Factory, through high school graduation and three years of college. He learned every aspect of the business during the course of these years and grew to love both the business and Door County.

Then, in late 1999, Todd learned that the Ice Cream Factory was for sale. “I knew the business was viable,” Todd explains, “and I didn’t have any immediate plans after college.”

So, with financing assistance from his parents, Todd closed the purchase in April of 2000 as his last semester at the University of Wisconsin – Madison was coming to a close.

“That last semester was interesting,” Todd says. “I was a student during the weekdays, then driving up to Sister Bay to re-tile floors, paint, and any number of other things that needed to be done to get ready for the summer season.”

For the first few years of ownership, following the adage if it isn’t broken, don’t fix it, Todd kept the business largely the same. And, of course, the core of the business is making and selling ice cream. 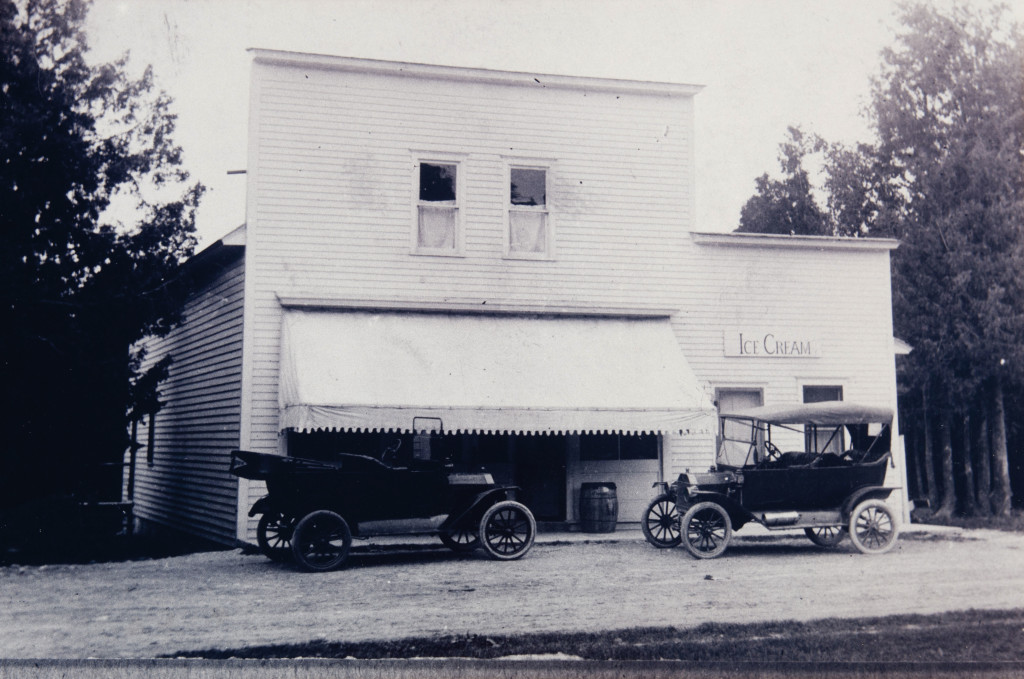 Unlike custard, which uses egg, one of the keys to his ice cream is using 15 percent butterfat for a rich, creamy texture. “Top quality ingredients are the other requirement,” Todd adds. “The best vanilla beans in the world come from Madagascar and a few years back a typhoon and coup caused the price of beans to jump from $180 a gallon to $750 a gallon. But I still bought Madagascar beans. Maintaining the quality of our ice cream is important.”

After a batch of ice cream is made it is rushed into a blast freezer set at -30 degrees Fahrenheit, which allows them to make a wide variety of flavors and store them so they are readily at hand.

“We can make any flavor we, or our customers, can dream up,” Todd says. 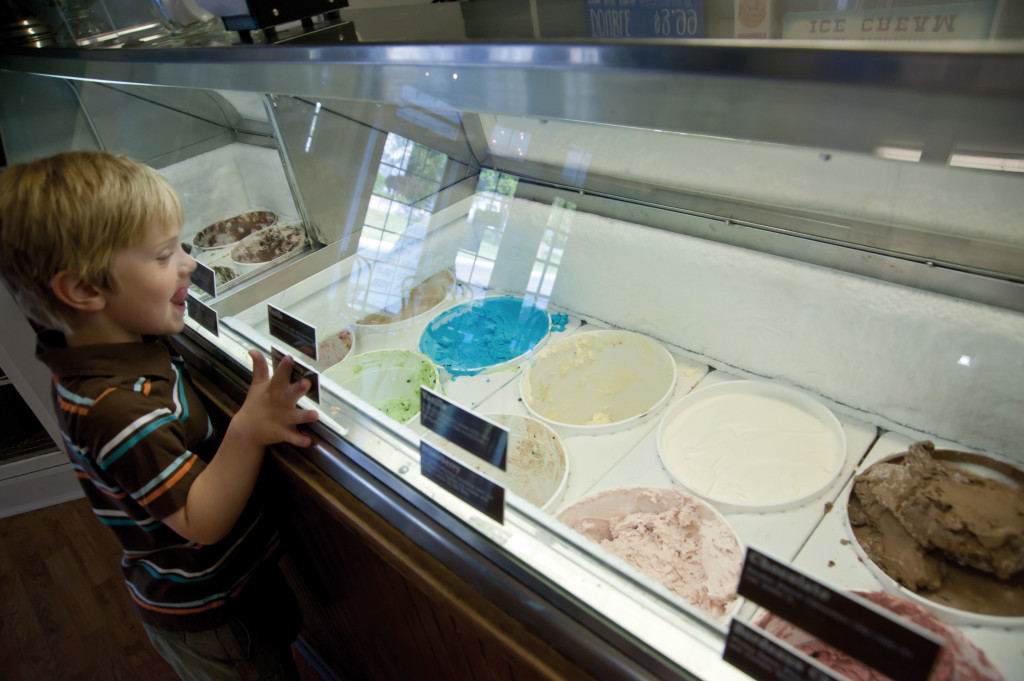 Four years ago, Todd looked to capitalize on that flexibility by starting the Create-a-Flavor Contest. Customers are asked to make suggestions of new flavors of ice cream during the first portion of the summer. Later in the summer, these recommendations are narrowed down to three, which are then created and offered in the restaurant. Patrons vote on their favorite and the winning flavor becomes part of the Door County Ice Cream Factory’s regular offerings. Customers this year, for example, will be able to stop in and enjoy last year’s Create-a-Flavor winner, Root Beer Float, any time throughout the year.

Another innovation occurred the year before. Prior to moving to Door County full time in 2006, Todd did some travelling during the off-season and, as you might expect, he made it a point to stop in ice cream shops on his travels. On a trip to Seattle he discovered a shop that made its own waffle cones and, the very next season, when he re-opened the Door County Ice Cream Factory he was making his own waffle cones.

“There’s really nothing you can buy that tastes better than a grilled batter, hand-rolled waffle cone,” Todd smiles.

The other portion of the business, of course, is the restaurant, which features a sub menu, soups, salads, paninis, and pizza. Customers make their selections on a menu card, turn them in and pay for their meal, and then are called to get their food when it is ready.

“We really try to target families, though everyone is always welcome,” Todd explains. “And toward that target we try to keep the pricing of our food family-friendly.” The “Family Pleaser Special” is one example of Todd’s family-friendly pricing. For just under $24 a family receives a 16-inch pizza, a family-size salad, and two liters of soda. 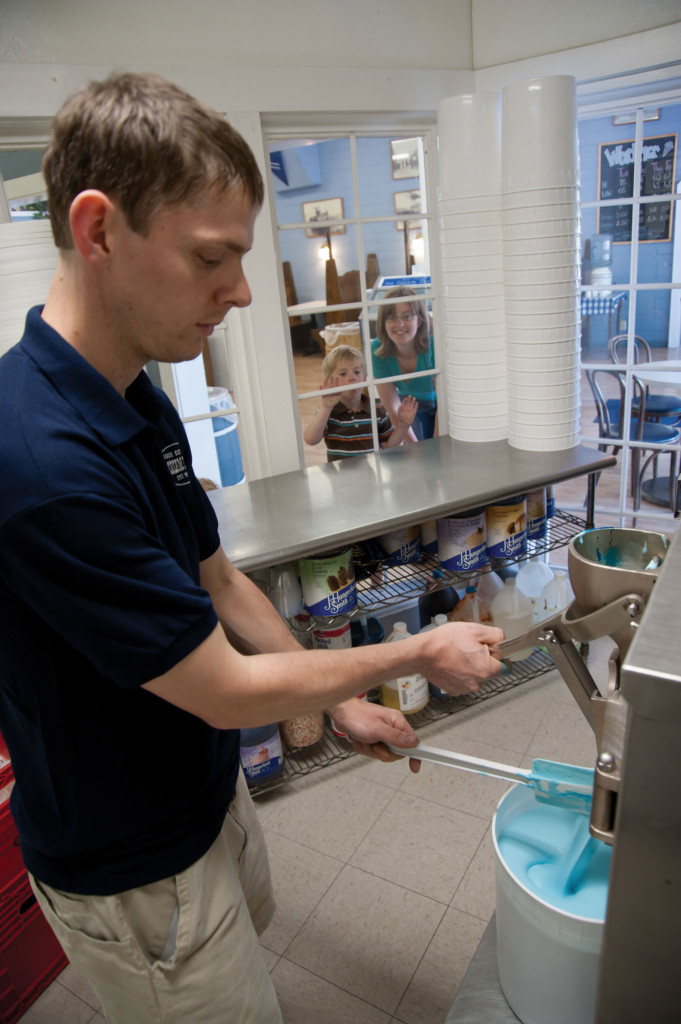 While you wait for the your meal, you can peruse the multitude of historic Door County photographs that cover the walls throughout – many one-of-a-kind, not to be seen anywhere else. Or, if you happen to be in the restaurant when ice cream is being made, you can watch the process from beginning to end through their viewing window.

Todd continues to look at ways to grow his business. A little more than a year ago he purchased a vacant lot in downtown Sister Bay across from the Waterfront Park. He is considering the possibility of re-locating his Door County Ice Cream Factory restaurant (along with hotel rooms on the second floor) to a new building he would construct.

“For right now, plans are on hold while I focus on running the business this season,” Todd says. “But I am hopeful things will work out [for the new building] in the not-too-distant future.”

For now, Todd can be found – as he has for most of the past 18 years – working in the business he has grown into a prime Northern Door County destination among visitors and locals alike, virtually everyday from May through October.

“I love what I do,” Todd concludes with a smile. “After all, who doesn’t love ice cream?”