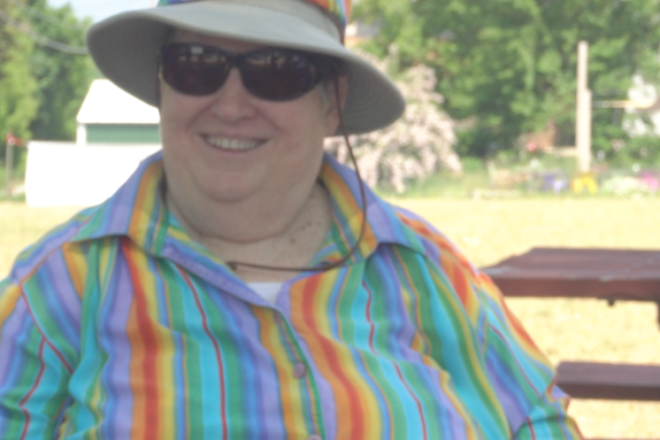 Celebrating the person behind 25 years of PFLAG Door County

This summer toward the end of June, among the smell of fried food, sounds of live music and the sight of bright rainbow flags waving throughout Martin Park in Sturgeon Bay, Open Door Pride awarded the City of Sturgeon Bay the fifth annual Sandy Brown Award. It honors a community member, business or organization that exemplifies the Open Door Pride mission: to affirm our community’s diversity through inclusion for all.

But who is Sandy Brown?

For many in Door County, Brown was the first safe, trusted person they talked to about their identities, orientations, relationships, fears and loves. But the path to becoming the namesake of Open Door Pride’s award has been a long and winding one.

Brown attempted to come out to a school counselor during the late 1960s, when the American Psychiatric Association considered homosexuality to be a mental illness.

“‘You don’t want to do that,’” she remembered as his advice to her. “That counselor was trying to save me a diagnosis,” Brown said.

A few years later, she told her mother, who died shortly afterward.

“I never knew if she told anyone else. I wasn’t out to my family,” Brown said. “She didn’t think my dad would be too understanding.”

Brown found a community, started a relationship and felt acceptance at gay-friendly events. She remembers a women’s music festival in Michigan.

“It was all women,” she said. “To be able to hold hands in the lunch line and make out – that was a freeing experience, I tell ya,” she said.

“One of my brothers called and said, ‘Are you trying to tell us something?’ ‘Well, as a matter of fact,’” Brown said. “Coming out is a constant process. Every time you meet someone, you have to decide when you will tell them. It’s ongoing.”

In 1991, Brown moved to Door County and worked as an early-intervention educator, traveling throughout the peninsula to work with children who had developmental disabilities. She eventually found friends with whom she felt safe and accepted. They celebrated Pride in barns and held a screening party of the well-known Ellen DeGeneres coming-out episode.

“Ellen coming out was huge,” Brown said. “A lot of people, even in this county, started to talk more about LGBT.”

In response, Brown decided to establish a Door County PFLAG (formerly known as Parents, Families, and Friends of Lesbians and Gays) chapter in 1997. She held monthly meetings, which included screening the PBS series In the Life and offering a safe place to talk. She had a phone number people could call and a post-office box to receive letters.

“I got a letter in that P.O. box – a young man who felt he was all alone, had considered suicide,” Brown said. “We had a meeting. I’m still in touch with him. He’s doing quite well.”

There was pushback, and still is, from some community members in regard to PFLAG Door County and LGBTQIA+ issues. She recalled one media outlet telling her it wasn’t their “policy to promote that sort of thing.”

And, Brown said, “we still get stories about reservations being denied – not very often, but it does still happen. One kid was taking off makeup at the end of a meeting. They can’t express themselves. Yes, we’ve made progress, but there’s backlash about it. There is still important work that needs to be done.”

For more than 25 years, Brown has been committed to that work, not only with PFLAG Door County, but with the League of Women Voters, NEW LGBTQ+ Roundtable, Door County Nonprofit Group, Open Door Pride, and Coordinated Community Response to Domestic Violence and Sexual Assault.

“She’s soft spoken, but very reliable and sure footed in her support,” Mitchell said.

Mitchell reached out to PFLAG Door County in 2011 when she was looking for information about transitioning and found support and a plethora of resources that she now offers to others seeking help. Cathy Grier reached out in 2016 when she was searching for an LGBTQIA+ community after moving to Sturgeon Bay and found a group of people who not only became friends but made her dream of putting on a Door County Pride event a reality – and among them was Sandy Brown.

Grier said that naming Open Door Pride’s award after Brown was a no-brainer, given that Brown is “a pillar and beacon for LGBTQ+ community members and their allies.”

PFLAG Door County will host a celebratory picnic Aug. 27, 11 am – 1 pm, in Sturgeon Bay’s Sunset Park, to mark its 25th anniversary. The potluck event, open to everyone, will also feature a mosaic project.

Since COVID-19, PFLAG Door County has moved its meetings online and found the shift to be very convenient, given the geography of the county. Members reside in places from Gills Rock to Green Bay, “so it will be nice to meet in person,” said Beth Miller, president of PFLAG Door County. “And it’s a special year.”

PFLAG Door County meets monthly on the third Tuesday. Find more information, sign up for its newsletter and receive the Zoom meeting link at pflagdoorcounty.org. Learn more about Open Door Pride and the Sandy Brown Award at opendoorpride.org.