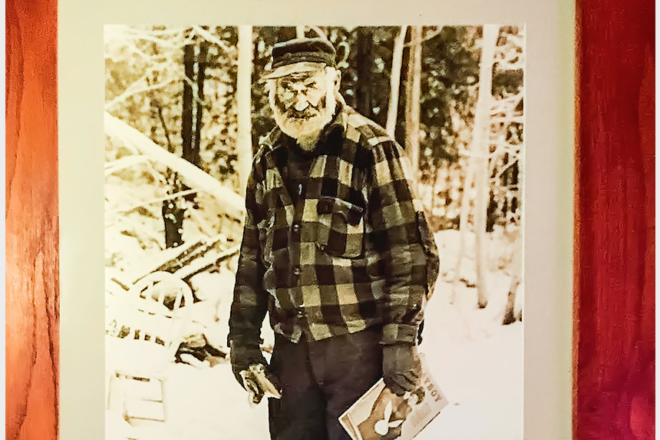 Harold ‘Coony’ Fish has stared out from the walls of the Bayside Tavern for decades.

The photo has become a local legend, but the man who took it sometimes wishes he never had.

It’s hard to miss Harold “Coony” Fish when you visit the Bayside Tavern in Fish Creek. His angry eyes keep watch on the tavern’s comings and goings every day, his face almost entirely covered by a thick, white beard, and his eyes sunken beneath thick, black eyebrows and a weathered cadet cap. His left hand clutches a newfound copy of the October 1970 issue of Playboy magazine, the first to feature twins on the cover (Mary and Madeleine Collinson got the honor) and boasting articles on attorney-turned-activist William Kunstler and embattled President Richard Nixon.

A line on the frame reads, “What kind of man reads Playboy?” — a nod to the magazine’s ubiquitous 1960s ad campaign.

Fish has been standing in this prominent spot on the wall of the Bayside since the mid-1980s, when photographer Peter Boice sold it to late co-owner Smilin’ Bob MacDonald for $100 and MacDonald’s promise never to reproduce it.

Fish was the son of Clarence and Mary Fish, two of Fish Creek’s earliest residents. Born in 1901, he never married and never fit into the world, say those who knew him. Boice took the photo at the town dump, where Fish worked and lived in a small shack. Fish would make regular treks by foot down to the Bayside’s predecessor, Bill’s Bar.

“All the towns had landfills at one point and had guys that just sat at the dump,” Boice said. “Coony didn’t drive. He walked everywhere. There were a lot of characters like him around at the time — these guys who came of age in the ’20s and ’30s in the Depression and never really acclimated to society as it changed. I have to say they might have been ahead of their time.”

And at the time, Boice was struggling to acclimate as well. He had recently returned from Vietnam, where he had served as a photographer, and he was spending much of his time wandering around the peninsula with his camera, snapping nature photos and the occasional vignette of small-town life, as he did when he made a run to the dump in December of 1970.

“Some people think that I set him up, but I didn’t,” Boice said. “He was just going through some junk, and he found these Playboy magazines, and I took that photograph.”

Over time, Boice came to regret it.

“It’s been kind of a funny journey with that picture,” he says. “Coony was kind of an innocent. Very childlike and misunderstood. A hermit. I don’t want to demean him. I respect his innocence. In some ways it’s almost like a regretful photograph.”

Almost 50 years after Boice took it, he still wonders what Fish was thinking in that moment.

“It might have shook him up,” he said. “I felt like I was a little intrusive, too — I had invaded his world. If you look deeply into his eyes, it’s pretty interesting to try and read those eyes of his. There’s like a childlike fear. I’ve never been able to get a handle on what was going on in there. The world was moving, and he was not a part of it, but yet had to live in it.”

Fish’s time in it ended Nov. 28, 1977, at the age of 76. He’s buried in Blossomberg Cemetery in Peninsula State Park, but he lives on from the wall of the Bayside.