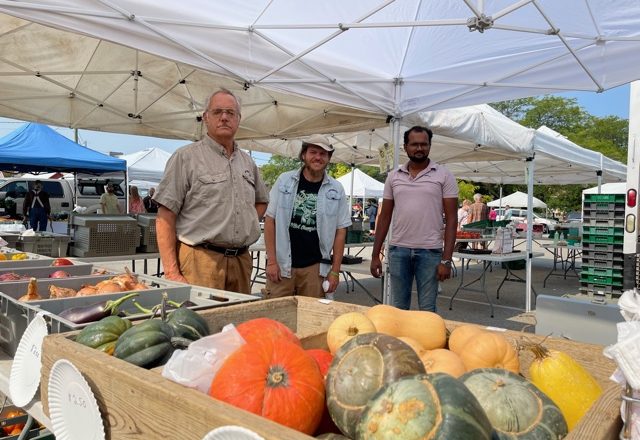 (From left) Steven Sullivan; his son, Michael Sullivan; and Shubhan Gaikwad, a student intern from India. Steve said they normally have four J-1 Visa students to help on their 38-acre vegetable farm. Delays with the program this year allowed them to hire only one. Photo by D.A. Fitzgerald.

Sully’s Produce feels the pinch of a tight labor market

Steve and Char Sullivan began selling vegetables in 1984 to earn money to pay for child care. A few years later, they parked a self-serve wagon at the end or their driveway. From there, like their vegetables, Sully’s Produce on County C just kept growing, and today the farm operation has a 20-foot-by-40-foot building, numerous vegetable greenhouses, a 10,000-square-foot greenhouse for bedding plants and flowers, and 38 acres of vegetables.

It’s a true family business that includes the couple’s son, Michael; and Char’s sister. Marchant’s Meats in Sturgeon Bay sells its produce, but Sullivan says the business is at least 85% retail.

All of this makes for long hours during normal times, and this year has been far from normal.

“We just don’t have enough help.”

Sully’s, like so many businesses on the peninsula, relies on help from international students who come here as part of the J-1 Visa program. In past years, the farm has had four student workers. This year, it could hire only one.

“They can’t get their visas,” Sullivan explained. “They get an appointment for an interview at the American consulate in their country, and two or three days before the interview is due, they get an email delaying them a month.”

Sullivan said he never heard any reason for the delays. Beyond the crucial labor that students provide, he said he’s appreciated the cultural exchange.

“We’ve had people from Haiti, Colombia, Brazil, Uganda, Ukraine, Turkey and Georgia. You learn a lot about other cultures. It’s amazing.”

Sullivan hired a neighbor and some local students this summer, but they weren’t enough. Sully’s had to stop selling at both the Baileys Harbor and Egg Harbor farmers markets because the operation just didn’t have enough staff. He said sales from the markets in Jacksonport and at the Settlement Shops were higher this year, and farmstand sales held steady.

The family grows “just about everything you can in this area,” Sullivan said, “even including watermelon and melons, which a lot of people don’t attempt this far north, but we have good luck with them.”

The reputation and success of Sully’s Produce are not based on luck, however; they come from hard work and attention to detail to provide quality and not just quantity.

But Sullivan predicted that changes are coming if they can’t hire workers. They pick melons and tomatoes when they’re ripe, for example, not when they’re half ripe. That’s a practice that emphasizes freshness and requires picking tomatoes three times a week rather than once.

“The quality of some things is going to start getting affected because we just can’t keep up,” Sullivan said. “It’s really going to show up more when we get into the fall crops. We’re going to have a lot less pumpkins.”

He’s already looking into solutions for next season, including completing paperwork to apply for student workers through the H-2A Visa program, a process that starts in December.

Sullivan admitted that his family is worn out from this season. Their eight- to 10-hour days increased to 12 and 14 hours, often seven days a week. But for them, it comes down to this: