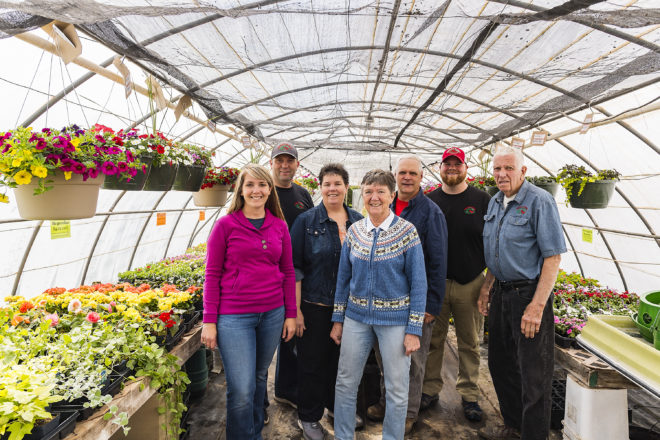 In 1967, when Don and Jane Wienke moved to a farmstead on Highway S between Algoma and Sturgeon Bay, they not only found an idyllic setting in which to raise a family that would eventually include four children, but they also nurtured a garden that produced more fruits and vegetables than their family could use.

Being of thrifty German and Norwegian heritage, they set up a card table on the roadside in front of their home and sold their bountiful crops. They also canned excess produce using their mothers’ recipes. “My mother and mother-in-law started doing a little canning,” Don Wienke recalled. “The first year, my mother made 10 jars of jam, and we sold all 10 jars the whole season … cherry, of course!”

Fast-forward 52 years, and, understandably, much has changed, including selling many more than 10 jars of jam in a season. The Wienkes still have a huge garden full of produce, which they sell fresh in season, and they still sell goods that they can themselves using family recipes.

But the card table has been replaced by a renovated barn housing two commercial, state- and federally approved kitchens, plus a full-time, year-round market featuring more than 100 varieties of canned pickles, jams, vegetables and other products made on site.

Along with their homemade products, the Wienkes also offer a line of thoughtfully sourced goods including salad dressings, honey and maple syrup. “The honey is local honey, and the maple syrup is from northern Wisconsin,” Marit Virgin — Don and Jane’s daughter — said. “We try to bring in local Wisconsin products.”

Another Wienke daughter, Sigrid Slaby, added, “Our kitchens are not very big. We are kind of maxed out. We produce a lot of product out of a small amount of space.”

In addition to their canned goods, the Wienkes also use one of their kitchens to create baked-in-store goods including lefse: a Norwegian flatbread made from potatoes, flour and salt that’s a seasonal favorite. “We make hundreds of them when we make them,” Slaby said. “They are really popular at Christmas time,” Virgin added.

Along with lefse, the bakery produces a line of pies, breads, kolaches and Belgian pies (big kolaches with cheese in the center), quick breads, cookies and bars. “We are not a traditional bakery, so we don’t do any donuts or anything like that,” Virgin said. “Date bars are our number-one seller, and almost all of our baked goods are made from scratch.”

All of the family’s products feature the Wienke’s Market label, decorated with three bright-red cherries and the slogan “A Taste of Door County.” Don Wienke is responsible for the label that has become synonymous with the market. He used skills he developed in junior college studying commercial art to craft the popular logo and slogan.

“The Lord blessed me with that: ‘A Taste of Door County,’” he said. “That is federal and nationally trademarked. That is our trademark. For some reason, that just came to me … I started puttering with it, and we developed it and had it trademarked. We are very protective of that.”

Wienke came to the food business naturally because his parents owned the first Piggly Wiggly in Algoma.

Wienke’s Market evolved over the years, adding new products and attracting more and more Door County residents and visitors. Then, around 2000, the Wienkes hired a salesperson, and “A Taste of Door County” became available in many markets and stores across Wisconsin and in northern Illinois and Upper Michigan, including in the Woodman’s, Sentry and Sendik’s stores in the Milwaukee area and in many Piggly Wiggly and mom-and-pop cheese and meat stores across the state. Econofoods in Sturgeon Bay also carries Wienke’s Market products, and during the summer, they’re available at the Green Bay and Sturgeon Bay farmers’ markets.

In recent years, Don and Jane Wienke have handed much of the market’s operation to family members, including their son Tollef Wienke; daughters, Sigrid Slaby and Marit Virgin; and Sigrid’s husband, David Slaby, and son, Sam Slaby. The Wienkes also have another son, Hans Wienke, who is not involved in the business.

Wienke’s Market employs about 26 people, with the number increasing to 30 to 35 during the summer. Canning takes place year-round, and pickles are the best seller.

“People love our pickles,” Sigrid Slaby said. “We probably have five or six basic brines that we use that were our grandma’s,” she said, but the younger generation has also developed a Russian pickle recipe. “It has pickling spice in it, so it’s kind of a sweeter pickle with onion and garlic,” she said. Other best-sellers include pickled mushrooms and beets and no-sugar-added jams.

“And we’ve expanded on a few things,” Virgin added. “Grandma had a basic dill-pickle recipe, but in one variety, we added onion and garlic and jalapeño peppers.”

Did Don and Jane ever think those first few jars of jam and roadside produce would grow into today’s long line of products bearing the Wienke name? “No, not at all,” Don said.