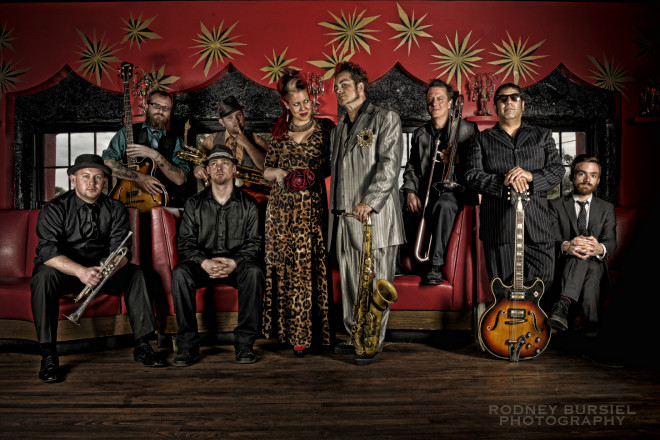 The spectacular R&B/Rock and Roll extravaganza known as WIFEE and the HUZz BAND rolls into Mr.G’s Logan Creek Grille on Sept. 19 at 8:30 pm. This show marks the band’s official second anniversary.

The band’s debut album, Songs of Eternal Love and Immediate Satisfaction, has been garnering national radio airplay and media acclaim since its release in July. The lead track, “She Won’t Go,” was named “Coolest Song In The World” by Little Steven’s Underground Garage on the prestigious Sirius/XM station, which has yielded response from across the globe. For more information about the band, visit wifeeandthehuzzband.com or find them on Facebook.

Mr. G’s is sponsoring this concert for their inaugural S.I.N. (Service Industry Night) night. Mr. G’s would like to recognize all the people who work hard here in Door County to keep this a great place to live and work. Just show proof of employment from any Door County business and get half price admission, just $5. Mr. G’s will serve a WIFEE specialty cocktail and $2.50 beers. Doors open at 7 pm and the music starts at 8:30 pm.

Mr. G’s Logan Creek Grille and Ballroom is located two miles south of Jacksonport on Hwy. 57. For more information call 920.559.0338 and ask for Mary or Bob.