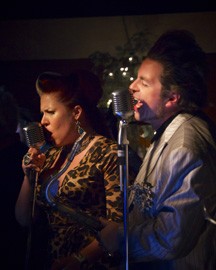 How does it feel to have a song selected to air as “Coolest Song in the World” on a radio station that broadcasts to 1.2 million listeners in North America, as well as to 190-plus other countries worldwide? WiFEE and THE HUZz BAND is about to find out.

“She Won’t Go,” the song chosen to be featured as “Coolest Song In The World,” was written at The Holiday Music Motel in 2012 during Steel Bridge Songfest, was produced by pat mAcdonald and recorded, mixed and mastered by Steve Hamilton.

The song will begin airing on terrestrial radio the weekend of July 10 and then go into heavy rotation on Little Steven’s Underground Garage (Sirius 21) starting the week of July 13.

Proudly declaring Sturgeon Bay to be her new home, Ruby James (WiFEE) will also be in a featured interview talking about the song, their beginnings and where things are evolving for her, partner Stephen Cooper (THE HUZz) and their 10-piece band.