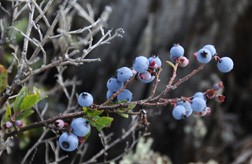 A branch of ripe Blueberries. Photo by Roy Lukes.

The very first wild Low Sweet Blueberries that I savored to the extreme were picked in early August of 1964 when I began working at the Ridges Sanctuary. Although we buy plenty of commercially-grown Blueberries and enjoy them, their flavor will never match that of the considerably smaller wild Blueberries. Experts tell us that the flavor of this fruit is contained largely in the skin and, because the small fruits have proportionally more skin compared to the amount of inner somewhat flavorless pulp per berry, this simply adds up to the smaller fruits having more genuine, intensive, mouth-watering Blueberry flavor.

Maine most likely leads the nation in the amount of wild Blueberries harvested and sold, but the Upper Peninsula of Michigan also has excellent quantities of these ambrosial wild fruits. It was in the March 1988 issue of Audubon Magazine that an article, “Tombstones of a Lost Forest,” written by Russell McKee, appeared. Eight years later in early August of 1996 my good friend Mike Madden and I planned a camping trip to the U.P specifically to explore the several thousand acre White Pine “stump forest” on the Kingston Plains northwest of Seney, Mich.

The unpaved, dusty, tooth-jarring Adams Trail Road leads one past the stump field and, as Mike and I soon discovered, carpet after carpet, expanse after expanse of wild Blueberry habitat. The thousands of Kingston Plains pines, harvested around 120 years ago, left behind very acidic soil, perhaps around a pH 4 to 5, which made the land worthless for farming. The “land sharks” burned much of the forested land over in order to trick unsuspecting people into buying it for agriculture. What it did do was provide the ideal growing conditions for wild Blueberries, Bracken Ferns and enormous carpets of lichens. 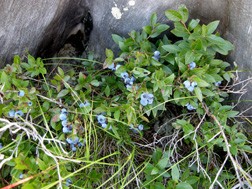 Blueberry shrub in the shade of a white pine stump. Photo by Roy Lukes.

Charlotte and I explored, photographed the fascinating landscape, and picked and ate our fill of sun-ripened organic Blueberries several years ago. Last summer we lured our friends, the Andersons and Lysnes, to join us. Following a very rainy late spring and early summer, there was an absolute bumper crop of the fruits, and we lamented over not having brought along more containers for harvesting the “blue treasure.” Locals we talked with during that camping trip reported picking eight or nine gallons for personal eating, canning and freezing.

This year, due to very dry weather, the Blueberries were generally smaller and not nearly as abundant as last year. Nevertheless we ate our fill and managed to pick a pint, some of which we enjoyed on our morning cereal back at our campsite. Now we continue to carefully ration the remainder, along with Door County Raspberries from our friends, the Martins, and some to be mixed in with Charlotte’s homemade corn muffins.

It is estimated that around 400 wild Blueberries will fill one cup while roughly 35 – 70 of the much larger commercially-grown fruit will equal one cup. Even though it took a while to pick our pint of berries, one of the many rewards provided by this mystical and enchanting environment, back in the boonies, was the quietness – blissfully peaceful, far removed from one of the worst qualities in our society, noise. By the way, we found the best picking to be in the shade close to the north side of the pine stumps. The fruit is generally in its prime from late July into early August.

The scientific genus of the Low Sweet Blueberry is Vaccinium, properly pronounced “vac-SY-nee-um,” the Latin name for Bilberry. Its species name, angustifolium, refers to the small narrow leaves of the wild Blueberry. These fruits, highly esteemed by both humans and bears, are true berries, being simple fruits that have fleshy ovary walls encasing one or more seeds. Other true berries are bananas, tomatoes, grapes and gooseberries. Raspberries and blackberries, for example, are not true berries, but that’s another story. 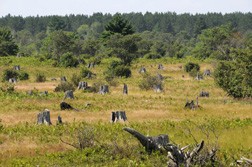 The broad fields of white pine stumps in the Kingston Plains. Photo by Roy Lukes.

Charlotte and I learned many interesting things about wild fruits and other native plants but also about the Anishinaabeg Indians from our deeply respected friend Keewaydinoquay Peschel. She was a native of the Garden Island and Beaver Island area and highly educated botanist and ethno botanist who for several summers taught at The Clearing in Ellison Bay. Several outstanding qualities of the wild Blueberries that the Anishinaabeg Indians of the Northern Lake Michigan Region learned several centuries ago are that they can be harvested with comparative ease, can be prepared for storage and future use under the most primitive and adverse conditions, are highly resistant to decay, and provide nutrition that not only helps sustain life but provides a source of healthful vitamins and valuable macronutrients and micronutrients. Plus, they taste delicious.

The Native Americans of Upper Michigan and elsewhere learned years ago of the many advantages of controlled burning of certain areas. By periodical burning of their best Blueberry picking areas the old wood was reduced to ashes while the heat of the fire got rid of diseases and insects. The underground Blueberry plant rhizomes were not damaged ensuring a bountiful Blueberry crop the following summer.

As much as most people dread the onslaught each early summer by Black Flies, they have proven to be the most important pollinators of the tiny white, urn-shaped Blueberry flowers in late spring. Come early August there will be many “purple-tongued” people busy savoring and harvesting the supreme fruit, that pure gustatory delight, Low Sweet Blueberries.