If your acquaintance with mushrooms is limited to those little cello-wrapped boxes in the produce aisle, you have no idea what you’re missing. 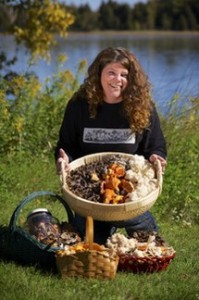 In the five years since Shannon Pump moved to Door County, she’s identified 21 edible varieties of wild mushrooms and says there are quite a lot more she hasn’t found yet.

Looking at the pictures and names, you’ll soon forget the idea that mushrooms are ho-hum little tan things and that you’re being creative if you buy a box of fresh ones, rather than canned stems and pieces.

The mushrooms on Shannon’s page have exotic shapes and names – lobster, chicken of the woods (not to be confused with hen of the woods), bear’s head tooth, crown-tipped coral, hedgehog, cauliflower, shaggy mane, black trumpet, oyster, chanterelle, dryad saddle, wine cap, puffball, funnel cap, bolete, comb tooth. Colors range from yellow and gold to green, purple, pink and coral, ivory and white. Some look like flowers, some look as if they’d be at home under the sea, and some, frankly, look pretty spooky. But if Shannon says they’re safe to eat, they are. 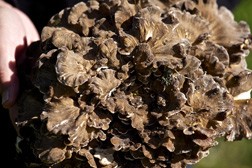 A rare find in Door County is this Hen of the Woods (Grifola frondosa) mushroom. Here is Shannon Pump’s story of this find: “I had taken my good luck charm, my son, Toren, out to show him the area that had filled with trumpets after the flood. We had an order for Chive Restaurant to fill. After picking several pounds in an area I have been picking for years we had to start heading out as it was getting dark. I have scoured those Oaks so many times in hopes of a nice find like I was about to see. We came around the tree and the light was filtering through the canopy on this one spot next to the tree and there it sat, a beautiful Hen! It was like nature pointed us straight to it! After a huge squeal of joy, a hug for the Oak tree and an expected eye roll from Toren, we cut the Hen loose put her in the basket and headed back to the truck. It was our first hen in Door County. Door County doesn’t have a major amount of these mushrooms as our Oaks are not quite mature enough and we are usually fairly dry. This is an absolute requirement for these beauties – water and aged oaks, as this mushroom lives in symbiosis with the trees.”

She grew up in the tiny town of Embarrass in Outagamie County. “The name means ‘a river runs through it’,” she says, “and that’s about all that ever happens there.”

Perhaps because there wasn’t much else to do, as a child Shannon began “playing” with mushrooms, which she found “fascinating and cool.” As an adult in Appleton, she worked as a landscaper and gardening consultant for nearly 20 years until an injury forced her to look for another source of income.

The move to Door County was prompted by a desire for better schools for her children, now ages eight and 15, and the fact that she wanted them to grow up closer to nature, as she had.

“When my daughter looked up at the sky from our deck near Kangaroo Lake and said, ‘Look at that streak of white in the sky,’ I realized she’d never seen the Milky Way,” Shannon says. “I knew at that moment that we’d come to the right place.” Both children are good mushroom hunters and, their mom says, know at least half of their scientific names.

Her knowledge of mushrooms has proved to be a salable skill in Door County, where people are especially interested in locally grown, natural, healthful food.

“The interest I’ve found is phenomenal,” Shannon says. “Two years ago, I had a lot more morels than my family could use, and I found a restaurant that was interested in buying them. That was the beginning. At first, I thought it would just be a hobby, but the business has grown like crazy.”

Now she sells to Waseda Farms, Wild Tomato, Greens N Grains and Gypsy Tacos, where Chef Mitch does incredible things with her mushrooms in his stand outside Door County Brewing Company in Baileys Harbor on Thursday and Friday evenings. 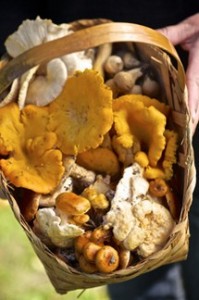 Shannon is also on staff as a naturalist at The Ridges Sanctuary, where she teaches classes and leads guided hikes to show people how to search for mushrooms. Next July she plans to lead a hike for campers in Potawatomi State Park. (Her guided hikes, by the way, are not like Easter egg hunts, where those with the sharpest eyes and quickest hands get the lion’s share of the goodies. All the mushrooms discovered on a hike are divided equally at the end.)

Brian Forest, the educational and land management specialist at the Ridges, says Shannon is a tremendous asset to their organization.

“We’re eager to use her as often as she has time available,” he says. “She has a fine background in plants and general knowledge of the environment. We’ve received great feedback on the guided hikes she led once or twice a week last summer and the help she provided with the kids’ summer camp.”

A growing interest of Shannon’s is the use of medicinal mushrooms. For example, chagas, which grow on birch trees, are the world’s best natural source of antioxidants.

“Their use stretches farther back in history than I can tell,” she says. “In many other countries, especially Germany, they are dried and used as a drink to replace coffee and tea. Studies have observed that chaga mushrooms have strong potential for inhibiting cancer cell growth.”

The turkey tail that grows on hardwood trees is another mushroom that can boost immune systems. They are lovely, shell-shaped creations in shades of blue or violet, tan and cream. Like the chagas, they can be dried and stored.

Along with pictures of the many kinds of mushrooms she’s harvested, Shannon’s Facebook page includes lots of references to information on other websites. She hopes to move this fall to a house with several acres where she can cultivate mushrooms. In the meantime, she welcomes calls at home, 1.920.265.8389 (you have to dial all the numbers), and is willing to deliver orders.

Have you ever wondered how to start foraging your own wild mushrooms? Are you unsure where to start? Edible Mushrooms 101 is the perfect class for you. Shannon Pump will cover basic mushroom foraging information – which are safe, how to find them and what to do with them once you do find them – at Greens N Grains, 7821 Hwy. 42 in Egg Harbor, from 1:30 to 3:30 pm on Wednesday, Oct. 15. Cost is $35 per person and includes an informational book.