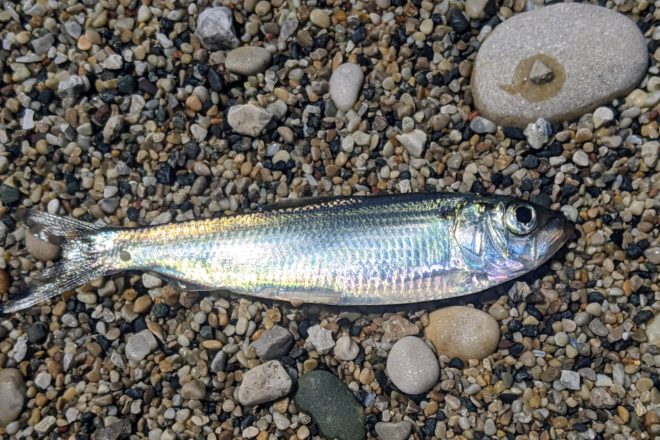 Alewives are the main forage for Lake Michigan’s salmon and trout fishery. Photo by Kevin Naze.

Take last fall, for example. Water temperatures on the Great Lakes were much warmer than usual, and a mild start to the winter had many anglers thinking there would be a very fast start to the 2022 Lake Michigan fishing season.

Then came one of the coldest, windiest springs in recent memory. So much for an early start to trout and salmon action!

If you’d moved away from the nearshore shallows and dropped a temperature probe down 30 feet or so, you’d have found water as cold as 38 degrees last week. Surface temperatures in some spots earlier this week were still only in the upper 40s.

Some very hot, sunny weather may have improved things by now, and it’s possible that the bite could explode any day.

However, one of the biggest lakewide alewife die-offs in years is likely playing a role as well. Historically, such events mean at least two weeks of very slow action. Many anglers theorize that’s because the weakened alewives – stressed after spawning and experiencing rapid water-temperature changes and perhaps competition for food – offer easy pickings as they spiral in their circles of death.

The good news is that there will be plenty of survivors, as well as the young of the year hatched. Alewives ran all the major Lake Michigan tributaries and crowded the nearshore shallows, which could lead to a huge year class.

All that bait that was out there in recent years means we could be looking at some very large Chinook (king) salmon and rainbow trout (steelheads) this summer – and perhaps even a shot at a state record, such as the massive, 47.5-inch, 47.86-pound king caught Aug. 7, 2021, off of Michigan.

The first three weeks of June have historically been some of the best rainbow fishing of the season. Not this year. But the spring river steelhead spawning run was above average, and there’s no reason to believe it won’t be excellent on the lake once it finally warms up.

Same with the salmon. There has been a solid bite in the southern half of the lake already this month on both the Michigan and Wisconsin sides. Here, it’s been very spotty.

With gas prices at levels never seen before, a lot of anglers are waiting to hear that the fish are ready. But that means a lot less exploring so far this year, and there’s a lot of water those fish could be cruising.

The waiting is the hardest part. Let’s hope we’re not waiting much longer.

The best bets for catching fish so far this year, location wise, have been the bays and harbors from Sturgeon Bay to Little Sturgeon, including Sawyer Harbor, which often produces a small to medium rock bass with every cast.

If you’re looking for a meal of fish, rockies aren’t bad, but they’re not perch either. For yellow-bellies, you’ll do better in a boat using worms, minnows or crawler pieces in the weeds, reefs or deeper mud. A lot of jumbos have already been hooked this season.

Walleyes are still hitting, mainly after dark around Sturgeon Bay, but also throughout the day in the lower bay from Green Bay to just north of Dyckesville.

Smallmouth bass are active all over, mainly in five to 15 feet of water over rocks. Tube jigs, jerk baits, minnow imitators or live bait such as nightcrawlers or large fatheads will get you in on the action.

If pike are your thing, try casting or trolling spoons, stickbaits or spinnerbaits, or soak some sucker minnows. You might just tie in to a Great Lakes strain muskie, too. Some giants were spotted spawning this spring in the bays and harbors.

On the inland lakes, bluegills and bass have been cruising the nearshore shallows. Some are spawning, and some are already done.

River anglers can anticipate to mixed bags on the Ahnapee and Kewaunee. A great number of hard-hitting bowfin (dogfish) have been hooked. Pike fishing has slowed during the alewife spawn, but it should be picking back up. Smallmouths, rock bass, bluegills, perch, catfish, carp and bullheads are also common catches.

Do you know of any amazing trees that may not ever have been reported to the Department of Natural Resources (DNR)?

There’s a new, interactive online site for the state’s Champion Tree Program that features maps, photos and locations of known giants. With the help of people across the state, the DNR began documenting the tallest trees in 1941. Learn more at dnr.wisconsin.gov/topic/forests/championtrees.

As of June 17, Lake Michigan water levels were up three inches in the past month but down four inches from a year ago. Lake levels were 24 inches below the monthly record set two years ago and 42 inches above the all-time June low, set in 1964.