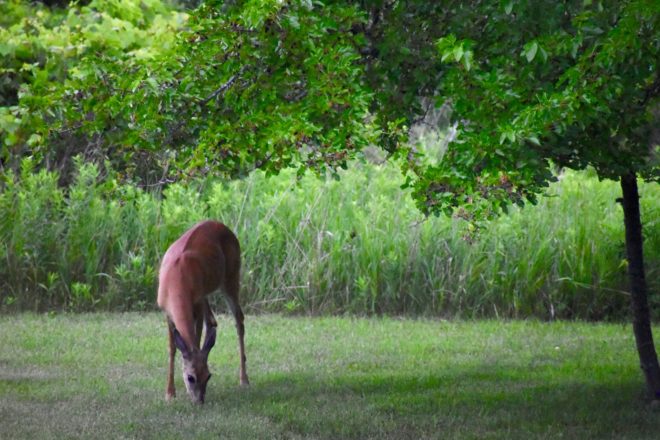 It’s easy to see whitetail deer in their bright summer coats during drives through the countryside early and late in the day – or in this case, right out the back window. This deer was feasting on wild mulberries that had fallen to the ground July 5. Photo by Kevin Naze.

If you’re the procrastinating type, you can be late and early at the same time this summer by getting out in the woods.

A lot of experts will tell you that any changes you make to your hunting areas should be done as soon as possible after the season ends – as in, during the winter. But that’s not realistic for many of us, and frankly, the experts – some of whom are self-proclaimed and others who are paid to promote a product – don’t know squat about your spot.

The fact is that a windy summer day is a fine time to make some noise in the woods, clear areas that need it and set stands that might be good bets come the deer opener. It’s also a perfect time to scout from afar. Deer are very visible when feeding in agricultural areas during the summer. A pair of binoculars, spotting scope or zoom-lens camera can help you see what’s in your area.

Wisconsin’s earliest hunts – for teal, early goose, snipe and dove – begin Sept. 1, and black bear season starts Sept. 8, but it depends on the method and harvest permit. Those using bait in Zones A, B and D must wait until Sept. 15 to hunt.

Fall turkey tags are sold over the counter these days, so there’s no need to apply for those. But if you want a shot at a wolf-harvest permit for the Nov. 6 opener, you’ll need to apply by Aug. 1. Some hunters and trappers have three or four preference points from not being drawn during prior seasons, but the way the system is currently set up, half the tags are drawn randomly, giving everyone a chance.

Lake Michigan – Wisconsin’s single-most-popular fishing destination – is living up to one of its decades-old nicknames: “The World’s Greatest Fishing Hole.”

Green Bay’s yellow perch, smallmouth bass and walleyes have been among the most active species, while the lake side has been best for salmon and trout. The average weight of a mature chinook salmon during the past two years has been the heaviest since the mid-1980s. That’s not likely to change in 2021, with plenty of heavyweights reeled in and fish stuffed with alewives.

Wisconsin anglers have benefited from abundant cool water so far this season. That’s good for fishing, and it’s also kept the spiny and Russian water fleas from exploding and clogging rod guides.

The DNR stocked nearly half a million chinooks in Door and Kewaunee county waters combined in 2018 and 2019, the two year classes most likely to be hooked this season.

Statewide, chinook stocking increased 50% in 2020, and some of the 1.2 million yearlings released are already being hooked as healthy 16- to 18-inchers. Wisconsin also stocked a million rainbow and brown trout combined; a half million cohos; 375,000 lake trout; and 50,000 brook trout.

Accurate Marine & Tackle in Kewaunee and Howie’s Tackle & Archery in Sturgeon Bay are ticket outlets and weigh-in sites for both events. Other K/D ticket sites are B&K Bait and Tackle on Washington Island, Baileys 57 in Baileys Harbor, JP Express north of Carlsville, Greystone Castle in Sturgeon Bay, Algoma BP and JP Express in Algoma, and Center Court Convenience in Kewaunee.

Tickets for the K/D tournament are $25 per person, or $13 for a one-day experience. Purchase them before July 19 to get in on a shot at the early-bird prizes, including a pair of inflatable life jackets from West Marine, caps from Flanigan Distributing and fishing tackle from a variety of sponsors.