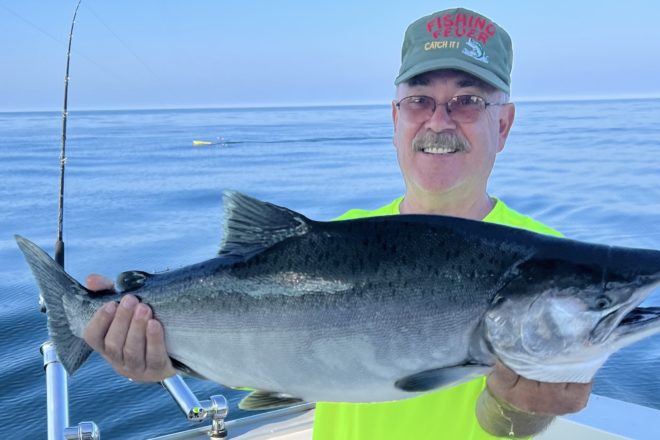 The first salmon that Miro Cigler of Daggett, Michigan, ever caught was a new Wisconsin state-record pinook salmon: a natural cross between a pink salmon and a Chinook. The 11.67-pounder grabbed a Howie Fly aboard a Lake Michigan charter boat Aug. 5 out of Sturgeon Bay. It topped the previous record – caught July 30, 2016, near Washington Island – by more than two pounds. Photo by Sid Ernest.

The first – what was confirmed as a new Wisconsin-record pinook (natural pink x Chinook cross) – was reeled in by Miroslav Cigler of Daggett, Michigan, aboard the Angler’s Edge charter boat out of Sturgeon Bay midafternoon on Aug. 5. It was his first Lake Michigan fishing trip and his first salmon.

An afternoon later, Kyle Gebert of Rudolph, Wisconsin, was fishing in his own boat off Algoma when he landed what he believed was a new state-record pink salmon. The fish hit a purple Stinger spoon running about 70 feet down in 180 feet of water. It was 27 inches long and weighed 10.40 pounds – more than four pounds larger than the current record taken Aug. 10, 1999, on an Algoma charter boat.

Although it looked more like a pink at first glance, Department of Natural Resources fisheries staff examined the catch and determined that it was another pinook. Gebert’s fish topped the old record by more than a pound, but Cigler’s catch was bigger.

Meanwhile, Angler’s Edge charter captain Sid Ernest said his favorite fishing partner, son Justin, was along when the record pinook was landed. Justin had moved back from Minnesota with his wife just prior to the season.

“Moments like that are when you realize how lucky you are,” Ernest said. “We will be able to share this fish story for years to come. To watch someone catch their first salmon is an experience for me as well.”

“I’ve had the opportunity to fish on both the Michigan and Wisconsin shorelines,” Ernest said, “from Racine to Washington Island, Grand Haven to the Manitou Islands. In 2008, with the help from some great friends, I established Angler’s Edge Sportfishing Charters here in Sturgeon Bay.”

He docks his boat in Madelyn Marina.

“One of the most rewarding attributes about charter fishing is meeting new people from around the world – especially those who have never experienced Lake Michigan,” Ernest said. “It makes me love what I do even more as I share this great lake with them.”

In 2014, Ernest started running a billfish boat in the Caribbean from January through May. He became an International Game Fishing Association certified captain and has been able to fish the Cayman Islands, Dominican Republic, Panama, Cabo, Australia’s Great Barrier Reef and many islands throughout the Bahamas.

“When I return to Sturgeon Bay in June, my mindset shifts from tunas and marlins back to trout and salmon,” said Ernest, whose home is in Carney, Michigan, in the Upper Peninsula, where he lives with his wife, Bridgett; and daughters Haley and Jenna.

Ernest said some of the other most memorable catches on his boat were a 34-pound, 4-ounce Chinook salmon; a 24-pound, 5-ounce lake trout; a 17-pound, 9-ounce rainbow trout; and a 12-pound, 3-ounce coho salmon.

The Department of Natural Resources will share the latest state and federal Lake Michigan fisheries research and gather public input on salmon and trout stocking during a meeting Aug. 30, 6-9 pm, at Lakeshore Technical College’s Centennial Hall West in Cleveland, located between Manitowoc and Sheboygan east of I-43.

Anyone may attend in person or online via Zoom. Find more details, including a link to register in advance, at dnr.wisconsin.gov/topic/Fishing/lakemichigan/LakeMichiganSalmonandTroutMeetings.html.

More than 20 state governors have signed a proclamation dedicating August as National Shooting Sports Month because of the positive impacts of hunting and recreational shooting, but only one of them is a Democrat: Tony Evers.

Gov. Evers said the state was joining the Department of Natural Resources and all Wisconsinites who are engaged in hunting and shooting sports in recognizing these activities and continuing to promote a culture of safety, responsibility and environmental stewardship.

The proclamation signed by Evers highlighted those contributions, as well as millions of dollars raised for wildlife and conservation efforts through excise-tax payments paid by firearm and ammunition manufacturers. These payments are returned to the states based on land size and the number of paid hunting license holders.

Wildlife enthusiasts are encouraged to report game-bird observations through the Game Bird Brood Survey throughout August, and deer sightings through Operation Deer Watch through Sept. 30, both of which are easier than ever to participate in, thanks to an online app. Get set up with information available at dnr.wisconsin.gov/topic/WildlifeHabitat/GameBirdBroodObservations and dnr.wisconsin.gov/topic/WildlifeHabitat/summerdeer.html.

Algoma’s Shanty Days Fishing Contest is this weekend, ending Sunday, Aug. 14, at 10:30 am. Tickets for youth ($5) and adults ($10) are available at Algoma BP, Algoma Hardware & Sporting Goods, Graf’s Mobil and Hooked Up Tackle.