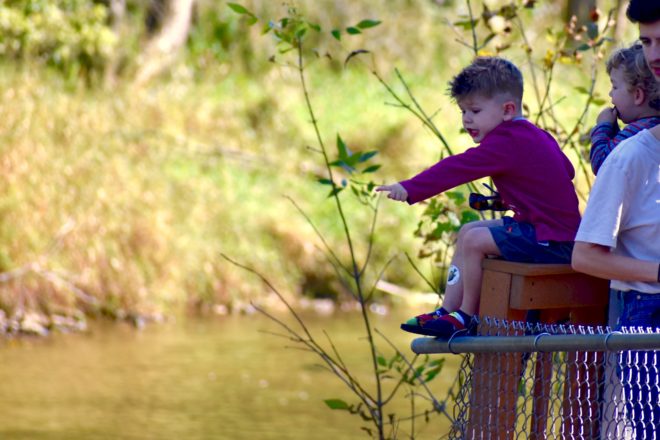 Four-year-old Easton Shaw of Algoma pointed excitedly toward a leaping salmon on the Kewaunee River during an Oct. 1 open house at the Besadny facility. He was there with his two-year-old brother, Spencer; and his parents, Ben and Kayden. Read more below. Photo by Kevin Naze.

Eighty-five people died in Wisconsin recreational vehicle accidents last year – more than were accidentally shot and killed while hunting during the past 40 seasons combined.

Last year alone, 34 people died in All-Terrain Vehicle (ATV) accidents – four more than in all the fatal hunting accidents during the past 25 years. Twenty-five others were killed in boating accidents last year, and 26 more – 13 in each activity – died while snowmobiling or using Utility Task Vehicles (UTVs) in Wisconsin.

These figures come from the Department of Natural Resources’ recently released 2021 Safety Education and Enforcement Report, and the number of fatal hunting accidents was compiled by researching annual DNR hunting-season reports.

Not included in the boat totals are manually propelled boats without motors or sails, sailboats shorter than 12 feet without motors, and vessels registered in another state that use Wisconsin waters for fewer than 60 continuous days.

Alcohol use and excessive speed topped the list of factors in fatal ATV, UTV and snowmobile crashes, and reckless behavior by passengers or operators was the top factor in fatal boating accidents.

Helmets were worn by all 13 who died in snowmobile accidents. In addition to alcohol use, excessive speed and sharp turns were factors in most of those.

Illegal operation on or in the vicinity of highways and operating without the required headgear top the list of ATV/UTV violations. Operating an ATV without a valid safety certificate or an ATV or UTV without a valid registration also rank high on the list of more than 1,700 citations issued in 2021.

For boating, the top four of more than 1,500 tickets written were failure to carry the required number/type of readily accessible personal flotation devices for each person on board, operating at a speed in excess of the posted notice, operating a personal watercraft greater than slow-no-wake within 100 feet of another boat, and operating a boat without a valid certificate of registration.

Nearly 90 citations were issued for OHMs. The top three were for unauthorized use on a highway, operating without a proper safety certificate, and operating on a public property posted closed or where prohibited by law.

The youth gun deer hunt is this weekend, Oct. 8-9. Check the rules for participation and reporting at p.widencdn.net/gpkljm/DeerYouthHunt. Meanwhile, the Southern Zone duck season, which includes Door and Kewaunee counties, opened Oct. 1 and runs through Oct. 9, then takes a five-day break, reopening Oct. 15. That’s the same day when the Open Water Duck Zone and ring-necked pheasant hunts open. See all the seasons and rules at dnr.wisconsin.gov/topic/Hunt.

If you don’t fish but want a chance to see spawn-minded salmon up close, now’s the time to take a drive to the C.D. “Buzz” Besadny Anadromous Fisheries Facility west of Kewaunee.

Even if you missed last weekend’s open house at the facility, you could do a self-guided tour. You’ll see salmon below the dam leaping their way up the stream alongside the river, and into and out of (and into again!) the ponds used to hold and sort them – ready-to-spawn Chinooks in most, and not-yet-ready cohos in another – prior to egg-taking. In between, two viewing windows cut into the fishway offer in-water swimming views and out-of-water leaping looks.

Chinooks are at their peak run right now, but a few coho salmon and brown trout are already in, too. The latter two species spawn from mid-October to mid-November.