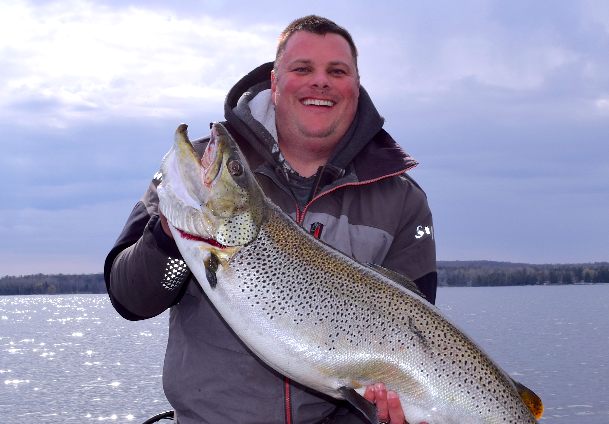 Door County’s spring sport fishery is among the most impressive in North America. Five-pound smallmouth bass, 10-pound walleyes and 20-pound northern pike aren’t out of the question.

But a 32-pound, nine-ounce brown trout that Ben Otto of Pulaski caught while casting for bass April 24 near Sand Bay turned the world-class potential up a notch.

Thanks to a rule change this year that allowed intentional targeting of bass for catch-and-release fishing prior to the first Saturday in May, Otto’s trout will go down in history as one of the peninsula’s most astounding fish tales.

“It was a beautiful April day, and I like fishing clear-water smallmouth,” Otto said. “If it wasn’t for the rule change, I wouldn’t have been out there.”

He’s been fishing since he was a youngster. Though his parents weren’t avid anglers, they encouraged him to fish.

“My grandpa got me started fishing for panfish on the Mississippi River,” Otto said. “When I was in high school, some of my parents’ friends got me into tournament fishing, and I’ve been fishing bass tournaments ever since.”

His top area finish was a second-place showing in a North American Bass Circuit event in Door County some years back.

Otto and friend Wade Geenen of Shawano were targeting bass around mid-morning April 24 when the giant brown hit Otto’s black marabou jig in about three feet of water.

Otto recalled, “I had just caught a four-pound bass two or three casts earlier. Then this fish hit, and I said, ‘This could be a good one.’”

Little did he know just how good. If the five-pound-test line samples he sent to the International Game Fish Association break where they should, the fish will be moved up and recorded as the largest ever taken in the world in the six-pound-test category.

“I saw a little silver flash, and I thought it could be a brown or a steelhead,” Otto said. “But I was thinking maybe a few pounds. I finally got a good look when it turned sideways, and I thought, ‘Wow, that’s 25 pounds!’”

Using his GoPro, Geenen captured the battle from just after hook-up to the net job and photo pose. If you watch it – it’s linked on the Facebook page of Howie’s Tackle – Otto apologizes in advance for swearing during the excitement.
“I knew it was even bigger once it was in the boat,” Otto said. “It was ridiculous. The fact that I could even get that thing in. Not knowing what it was at first, I pulled on it probably harder than I should have.”

(For you tackle geeks, he was using five-pound-test Power Pro line on an old Bass Pro Shops spinning reel set in a St. Croix rod.)

Otto said his heaviest fish from Green Bay waters had been a 52-inch muskie, estimated to be about 42 pounds, that he caught a decade ago in the fall. That fish was released, and he had a replica mount made.

This time, the trophy trout will be a skin mount done by Bart Falish of Windy Ridge Taxidermy in Brussels.

• A steady diet of northerly winds continues to delay migration, but a few lucky birders have seen the first Baltimore orioles, ruby-throated hummingbirds and rose-breasted grosbeaks on the Kewaunee/Door peninsula this week.

• Track sightings of all your backyard favorites – as well as colorful warblers and other spring woodland arrivals – at ebird.org/wi.

• Meanwhile, The Biggest Week in American Birding is going virtual this year, May 6-10. Check out the impressive schedule at biggestweekinamericanbirding.com/summary-schedule.html.

• As part of World Migratory Bird Day on Sunday, you can explore the details of your favorite species through the world’s most comprehensive digital bird guide, which is free through Sunday at birdsoftheworld.org.

• The Cornell Lab of Ornithology’s Macaulay Library recently received its one-millionth audio recording. More than 20,000 recordists and bird-watchers have contributed to the collection during the past 91 years, advancing birding tools, conservation and science in the process. Listen to some of the “greatest hits” – including an ivory-billed woodpecker recorded 86 years ago in Louisiana and a laughing kookaburra from Australia in 2011 – at macaulaylibrary.org.

Members approved three free antlerless permits with a license, an antlerless gun hunt during the Christmas holiday break period, and an extended bow and crossbow season throughout January.

Kewaunee County’s CDAC met Wednesday and was expected to approve similar recommendations, including the extra seasons and up to four free antlerless permits with each license.

The Wisconsin Council on Forestry will host an online public listening session May 11, 6-8 pm, when breakout rooms will allow attendees to share their input on the state’s forest industry. Sign up at wedc.org/rural-prosperity/forest-products-industry-listening-sessions. The website also provides an opportunity for written comments.

The Sturgeon Bay Bass Tournament has a new, on-the-water weigh-in this weekend. There will be a Kids’ Day Saturday, with T-shirt fish printing, a kids’ tournament and other events. Learn more at sturgeonbaybasstournament.com.

Weigh In on Wolf Management

Citizens have until May 15 to participate in an online survey about wolf management in Wisconsin. Find it at research.net/r/2021_WI_Wolf_Comment.