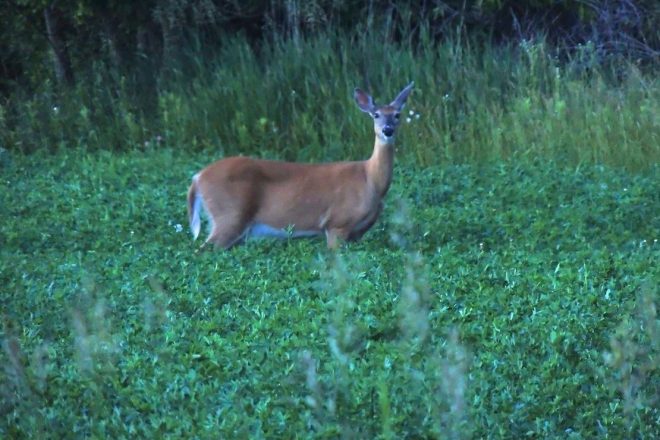 While farmland antlerless deer tags are free and abundant again this year, you’ll need to purchase a bonus permit to be able to shoot antlerless deer in parts of the northern and central forests. Photo by Kevin Naze.

Whether you hunt whitetails and wild turkeys locally, or head to another county to try your luck, now’s the time to pick up the tags you’ll need.

It’s true that all hunters get one either-sex fall turkey tag with their license purchase, but leftovers are also available. You can check by zone at dnr.wisconsin.gov/permits/fallturkey.html.

Meanwhile, those who hunt deer in Kewaunee County can get up to four, free antlerless tags with their bow or crossbow and firearm deer licenses, while Door County hunters can get three with each license this year. You’ll still need to select private or public, and print them out.

Additional bonus antlerless permits – highly-coveted in the northern and central forest zones where they don’t give out tags like candy at a parade – went on sale this week. See what’s left at dnr.wisconsin.gov/permits/bonusavailability.html.

Authorizations for both deer and turkey tags are available on the DNR’s Go Wild website, or at any of more than 1,000 license sales locations. Resident bonus tags for turkeys are $10. For deer, they’re $5 for youth ages 11 and younger, $12 for other residents and $20 for non-residents.

Luis Ricardo Hernandez Martinez, a 19-year-old angler who had never fished salmon before, reeled in the heaviest Chinook, or “king,” ever caught in the Great Lakes Aug. 7 while fishing on a charter boat out of Ludington, Mich.

The new Michigan state record – 47.86 pounds – hit a Moonshine magnum Raspberry Carbon spoon and was 47-1/2 inches long, the same length as the Wisconsin record caught off of Sturgeon Bay in 1994 (44.92 pounds).

According to the captain, the spoon was long-lined about 60 feet down on weighted steel line and a mono leader behind a planer board in about 200 feet of water. The battle took about 45 minutes.

Michigan’s prior record was taken 43 years earlier in 1978 when snagging was legal. That fish – foul-hooked in the Grand River – was 43.5 inches and 46.06 pounds. The previous Great Lakes record on official scales was a 47-incher that went 46.38 pounds from Lake Ontario.

If you’ve ever considered supporting Wisconsin’s Endangered Resources Fund by purchasing a bald eagle or wolf plate, now might be the time.

Through the end of the year, the DNR is offering a $25 rebate for new purchases of the plate. The hope is you’ll continue to support after the “free” year, ponying up the additional $25 annually when renewing.

Since 1995, sales of state Endangered Resources license plates have played a critical role in funding conservation work for more than 400 wildlife species and 300 plant species listed as endangered, threatened or special concern.

Revenues from plate sales, along with tax form donations and state matching funds, have accounted for as much as 40% of funding for special concern species conservation some years. Last year, license plate sales raised $434,463 for conservation of endangered resources.

To buy a new plate, fill out the WisDot Endangered Resources License Plate Application Form and download and print off a $25 rebate coupon from the DNR’s website.

The infrastructure package currently making its way through the federal rule-making process includes $1 billion for the Great Lakes Restoration Initiative and $1 billion for the National Culvert Removal, Replacement and Restoration Program to address challenges with hundreds of culverts around the country that block upstream migrations of anadromous fish such as salmon, steelhead and sturgeon.

Many property owners are helping monarch butterflies fuel up for their 1,700-mile journey to Mexico this fall by supplying native milkweed and nectar plants in their gardens.

No matter how much or how little space you have, creating habitat is the most important action you can take to support monarchs.

Check out a list of the top 12 plants and learn how you can help at wiatri.net/Projects/Monarchs/habitat.cfm.

All the rain in recent weeks has caused an unusual four-inch gain for Lake Michigan in the past month, though lake levels were still down about 13 inches from the record set last August.

Since last week’s report, wolves killed two more dogs, 10 sheep, a beef calf and a beef steer in five counties in northern and central Wisconsin. One of the dogs was a pet border collie killed just outside the owner’s residence.

In addition, wolves injured a sheep and a foal, and 10 other sheep were listed as missing.