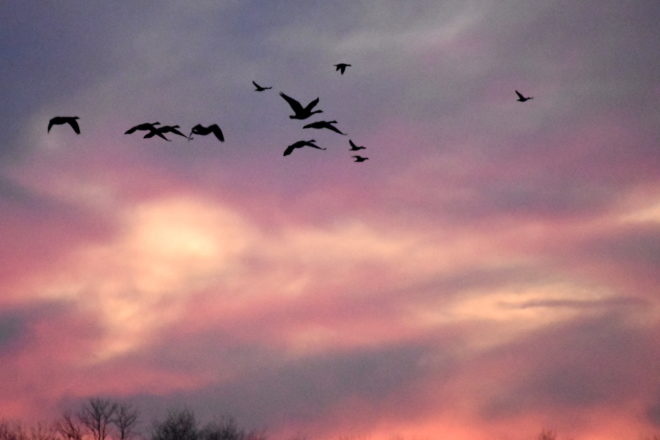 Large flocks of Canada geese are still hanging out along the Lake Michigan and Green Bay shorelines, making daily flights inland to scrounge in farm fields. The goose-hunting season will end Jan. 4. Photo by Kevin Naze.

Weather forecasters are calling for colder air New Year’s Eve and the possibility of a snowstorm New Year’s Day – a mixed blessing for those who love winter on the Door County peninsula.

Fresh snow overnight Monday was helpful to those who love tracking wildlife, and it could serve as a base for getting cross-country ski trails groomed as more snow falls. But heavy snow could hurt an ice-fishing season that’s already behind schedule, delaying formation and hiding potential thin-ice spots.

As always, a few anglers had been carefully walking out on two to four inches of ice in some protected nearshore locations. However, continued thaws combined with a heavy, wet snow earlier this week mean extra caution – and patience – will be needed.

Some whitefish guides have pushed back trips until at least mid-January, and others are taking a day-to-day look. Sub-freezing temperatures expected for the first 10 days of January will help, but anglers should be sure to check with a reputable guide or bait-and-tackle shop for the latest updates before heading out.

Meanwhile, Whitefish Dunes and Newport state parks are both hosting First Day hikes Jan. 1, and participants are invited to share their adventures using the hashtags #OutWiGo and #FirstDayHike on Instagram.

Whitefish is the first county park with a scheduled candlelight ski and hike Jan. 29. Track the organized activities at the parks at dnr.wisconsin.gov/events.

Daily electronic harvest reporting would be required, and a new restricted area for trap nets set for whitefish in southern Green Bay would be created.

Although the proposed final rule would decrease the entire Lake Michigan commercial whitefish quota by 900,000 pounds, it would more than double the current quota in Zone 1 – southern Green Bay – to 800,000 pounds, reflecting a whitefish population that has nearly tripled since 2008.

In Zone 2, which encompasses northern Green Bay as well as Lake Michigan from roughly the Algoma area north, the quota would be cut by more than 1.3 million pounds. Zone 3, south of the Algoma area, would remain unchanged at about 350,000 pounds.

Members of the public may submit written comments by Jan. 4 to [email protected].

The U.S. Geological Survey’s Upper Midwest Environmental Sciences Center is conducting a survey of hunters who participated in the new Green Bay and Lake Michigan Open Water Zone that will be in effect through 2025.

Input from hunters will help inform season frameworks and provide important harvest data. The survey takes only five to 10 minutes to complete, but the link is available only through 11:45 pm on Dec. 31.

The new Open Water Zone is specific to the offshore, open waters of Lake Michigan and Green Bay, starting 500 feet from the shoreline and extending to the Wisconsin/Michigan border. Regulations can be modified, and hunter suggestions are welcome.

To take part, search for the long link online using the keywords “Hunter Survey for Green Bay and Lake Michigan.”

As of Dec. 24, Lake Michigan was down one and a half feet from late December 2020, and it was nearly two feet below the all-time high, set in 1986. Water levels were still 13 inches above the 100-year average, and three and a half feet higher than the record December low, set just nine years ago, in 2012. The water is expected to drop another two inches during the coming month.

After the late antlerless deer hunt wraps up Jan. 1, Door and Kewaunee county bow and crossbow deer hunters can still try their luck through Jan. 31.

The late Canada goose season will end Jan. 4, and the wild turkey, pheasant and Zone A ruffed grouse hunts will all close Jan. 9. Gray and fox squirrel hunting is legal through Jan. 31, and cottontail rabbit hunting is permitted until Feb. 28.