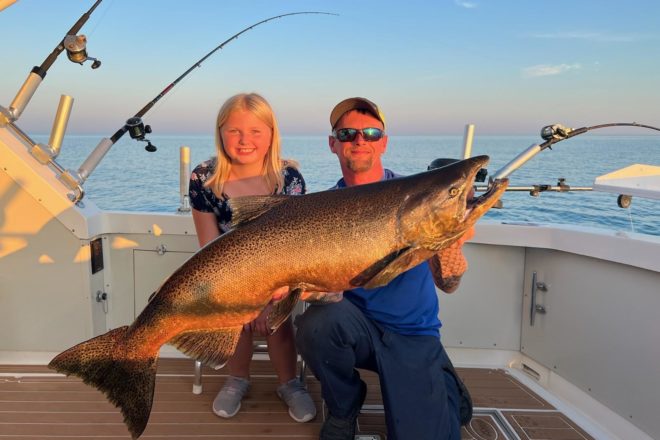 Nine-year-old Maiya Yunk of Algoma and her charter-captain dad, Tyler, show off a trophy Chinook salmon Maiya reeled in Monday close to shore on Lake Michigan at Algoma. Some spawn-minded kings have already entered lakeshore rivers and creeks. More will join them during the coming week, with coho salmon and brown trout to follow. Photo courtesy of Tyler Yunk.

The numbers may be revealed during the Sept. 28 NRB meeting

Don’t be surprised if wolf-management opponents are howling during the Sept. 28 state Natural Resources Board meeting in Ashland.

In an agenda that’s heavy with air-quality, waste-management and water issues, the most press will likely come after an information item from Randy Johnson, a large-carnivore specialist with the Wisconsin Department of Natural Resources (DNR).

More than six months after the agency wrapped up its 2021-22 winter wolf-tracking effort, Johnson could reveal what the population model shows about the number of wolves that were in Wisconsin last winter.

If he does, it’ll likely be a ballpark estimate of wolves on the ground before the state’s nearly 300 packs had new pups this spring. Litters of four to six are common, so it’s hard to believe the estimate won’t still be three to four times larger than the current minimum goal of 350 wolves.

There’s been no word on when the agency will release an updated wolf-management plan, which began in January 2021. The 29-member Wolf Management Plan Committee – a diverse group of individuals representing stakeholder groups both for and against wolf management – met four times between July and October last year, and a first draft of the new plan was anticipated more than six months ago.

Many wolf-management advocates believe that in-state and out-of-state animal-activist groups are using fuzzy math and questionable science to try to sway the DNR to drastically increase the minimum wolf-population goal.

The DNR will open egg-taking operations next week as the annual salmon spawning run heats up. Peak egg-take takes place during the first few weeks of October for Chinooks at Strawberry Creek in Sturgeon Bay, and for cohos at Besadny in Kewaunee and the Root River in Racine. The public can watch egg-taking at Strawberry Creek on Mondays and Thursdays once it begins.

Meanwhile, after a two-year break due to COVID-19 restrictions, the DNR is advertising an open house to take place Oct. 1, 9 am – 3 pm, at the Besadny facility, N3884 Ransom Moore Lane, west of Kewaunee.

There will be guided tours, egg-collection demonstrations, fishing displays and an opportunity to adopt a sturgeon for river release. The Algoma-Kewaunee Area Great Lakes Sport Fishermen will provide wagon rides, and food and drink will be available for purchase.

Country-music superstar Luke Combs – the reigning Country Music Association Entertainer of the Year – is also an avid outdoorsman and the honorary chair of the 50th annual National Hunting & Fishing Day this Saturday.

More than 50 million Americans fish and hunt, contributing billions of dollars in economic activity, as well as contributions through licenses and taxes paid on fuel and gear. Many are also directly involved in conservation organizations that help to protect, improve or purchase habitat from which both game and nongame species benefit.

Anglers and others who have opinions about how many salmon and trout should be stocked in Lake Michigan and Green Bay may comment until Oct. 1 to help guide fisheries managers who are working on the next three-year plan.

After decades of stocking cuts, Michigan is proposing a 54% increase in Chinook plants to 1 million beginning in 2023. With data showing that more than half of the salmon hooked in the lake are produced in the wild, state managers are trying to find the right balance of predators (salmon and trout) and prey (alewives, mostly).

Presentations from a recent meeting and a link for leaving comments are available at dnr.wisconsin.gov/topic/Fishing/lakemichigan/LakeMichiganSalmonandTroutMeetings.html.

Legler said the DNR has a hatchery goal for Chinook eggs, but it may collect more in case there’s an issue with survival, such as occurred last fall. That resulted in the agency falling short of its 1.2 million Chinook goal this spring. In an effort to make up the shortfall, the DNR is planning to stock hundreds of thousands of additional steelhead (rainbow trout) this fall.

Steve Nooyen of Sturgeon Bay and Neil Vandervest of Oneida were third with 21-09, and Adam Neu of Sturgeon Bay was part of the sixth-place team with 20-02. Neu won $1,500 for big bass at four pounds, 15 ounces.

The DNR is hosting a YouTube webinar series designed for those who are interested in learning about hunting, fishing and trapping. Watch the webinars on the DNR’s YouTube channel at youtube.com/user/WIDNRTV.

Though still eight inches above the 100-year average, Lake Michigan water levels as of Sept. 16 were down two inches from mid-August, down seven inches from last September and 25 inches below the monthly record. Lake levels were still 39 inches above the all-time monthly low, set in 1964.