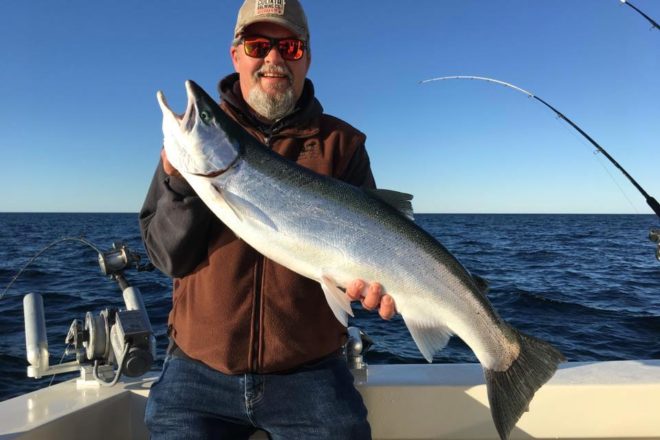 Great Lakes rainbow trout, or “steelhead,” are one of the early-season prizes available on Lake Michigan. Rainbows are hitting spoons, flies and stickbaits run up high over deeper water from Baileys Harbor to Kewaunee. This was one of many caught last weekend. Photo courtesy of Kinn’s Sport Fishing.

A cool spring has extended the action for Green Bay walleyes and smallmouth bass, even as Lake Michigan trout and salmon catches get underway. The mixed bag – which also includes panfish spawning in shallow bays and harbors on Green Bay, as well as in inland lakes in Door and Kewaunee counties – comes at a perfect time for Wisconsin’s annual Free Fun Weekend.

On June 6-7, there’s no fee to fish or enter state parks. Residents and nonresidents may fish without a license or salmon and trout stamp. All other regulations apply.

Admission stickers for state parks are not required during those two days, but campsites remain closed at least through June 7.

If you’re not sure where to go or what to use for your best shot at success, stop by one of the area’s many bait-and-tackle shops for the latest advice.

Will Wolves Be Delisted?

More than 100,000 comments were received about a U.S. Fish and Wildlife Service (USFWS) proposal to delist gray wolves from the list of threatened and endangered species last year.

A decision on the plan was expected earlier this spring, but as of June 1, the feds have not released anything.

The uncertainty about on-again, off-again management has led a number of lawmakers to push for the passage of a bill that would delist wolves and allow states to manage their populations without needing USFWS approval.

Wolves in the Great Lakes region have been delisted – but quickly relisted – several times during the past 15 years as a result of animal activist groups challenging USFWS rulings in court.

Many of these groups use the gray wolf as a poster child for their fundraising efforts, even as the number of wolves has risen well beyond management goals in Wisconsin, Michigan and Minnesota.

Wisconsin surpassed its goal of 350 wolves in 2004, and the annual wolf count has been more than double the goal since 2010. Even after three seasons of legal hunting and trapping (2012-14), the past three winter wolf minimum estimates have been nearly triple the state goal.

With growing wolf numbers comes increased predation on livestock, hunting dogs, pets and wildlife such as deer, snowshoe hare and elk. Through May, the DNR had confirmed wolf depredation on 21 livestock and three dogs in nine northern and central Wisconsin counties, as well as 11 verified incidents of harassment to livestock or threats to humans in six counties. Fifteen more depredations or complaints could not be confirmed as wolves, but a number occurred in areas that had previously had confirmed wolf depredations.

The agency has paid livestock and dog owners more than $2.7 million in reimbursement for losses due to wolves, the majority during the past decade.

Once management is allowed, Wisconsin, Michigan and Minnesota all have approved plans in place that include ensuring a healthy population of wolves.

The U.S. Fish and Wildlife Service received more than 1,400 comments on a proposal to allow states to manage numbers of double-crested cormorants. A decision is expected sometime this fall.

More than 80 percent of Wisconsin’s cormorant population nests in the Lower Green Bay and Door County areas. More than a decade ago, there were nearly 15,000 nesting pairs in the area.

It’s been four years since a U.S. District Court judge in Washington, D.C., shot down a successful program that allowed states to reduce those booming numbers of double-crested cormorants. U.S. population estimates are in the millions, including about 250,000 in the Great Lakes.

Cormorants feed heavily on fish species such as alewives, round gobies and yellow perch, but they are also known to target recently stocked trout and salmon. At an average of about $1 each to raise a trout or salmon in hatcheries, the predators can quickly take a major bite out of a sport fishery that’s worth millions to businesses in Door and Kewaunee counties.

In addition, cormorants have trashed many small islands on Green Bay, stripping leaves from trees for nests and killing off vegetation with their acidic guano. Boaters complain about the stench when downwind of nesting colonies.