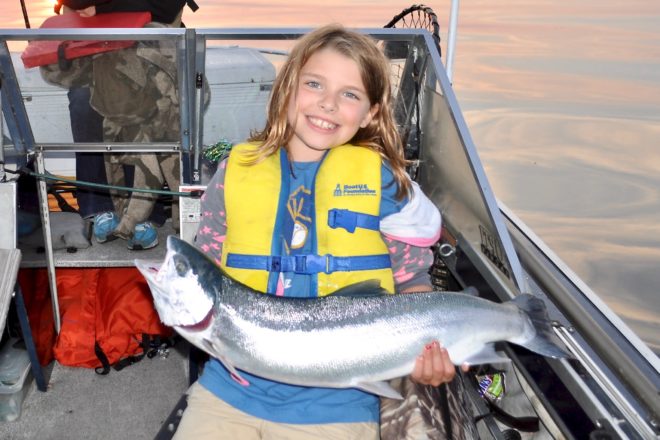 A favorite of both stream and boat anglers, rainbow trout – commonly called steelhead by Lake Michigan anglers – could see their stocking numbers doubled this year. Photo by Kevin Naze.

The County Deer Advisory Councils (CDACs) for both Door and Kewaunee counties voted to recommend three free antlerless deer tags per license sold this coming fall – down one from recent years in Kewaunee County and the same as this past season in Door.

In their preliminary recommendations, both councils also voted for having the holiday antlerless gun deer hunt and extended either-sex bow and crossbow deer seasons through the end of January 2023.

The public will be able to weigh in via an online survey prior to the final recommendations in late April. See how to do that and find out what other councils around the state voted for via a drop-down menu at dnr.wisconsin.gov/topic/Hunt/cdac.

Meanwhile, Department of Natural Resources (DNR) Deer Program Specialist Jeff Pritzl said about two-thirds of the whitetails taken prior to and after the gun deer hunts last year in Kewaunee and Door counties – and much of the state – fell to hunters using crossbows. Locally, in the extended January hunt, it was 3-to-1 crossbow to bow.

Pritzl also noted that Kewaunee County hunters took about 10 bucks per square mile of deer range last season, the most in the state. Keep in mind, though, that the county’s habitat is considered only about one-third deer range (forests, marshes and other permanent cover 10 acres or more in size), so the actual buck kill per total land mass was about 3.6 bucks per 640 acres (including woodlands, marshes, ag fields, grasslands and small tracts).

If southern Door County was separated from the northern section as it was years ago (with units 80A and 80B), it’s very likely that it, too, would rank at or near the top in the buck kill per square mile.

DNR hatchery trucks will be busy this spring and fall as workers stock more than 2.9 million trout and salmon into Lake Michigan and Green Bay waters.

The agency is hoping to get some additional Chinooks from Michigan after higher-than-usual egg-to-hatch mortality occurred last fall. The DNR has stocked about 1.2 million Chinooks the past two years – up from about 810,000 in recent years prior to 2020 – but it’s predicting about 825,000 this year, plus a hoped-for 140,000 more from Michigan to stock here.

To make up for fewer salmon, the DNR is shooting to double the stocking of steelhead (rainbow trout) to about 940,000 fish, roughly half as fall fingerlings. The agency is going to take additional steelhead eggs this spring as well as work to get additional fish from Michigan.

All licenses allowing fishing, hunting and trapping for the 2021-22 license year expired March 31.

There are many fishing license options, from Conservation Patron to first-time buyer to husband-and-wife. The most popular is a resident or nonresident fishing license. Don’t forget to purchase a salmon and trout stamp if you’ll be targeting either of those on the Great Lakes or tributaries.

Review these and other options at gowild.wi.gov, or anywhere licenses are sold. New 2022-23 regulations are now available in booklet form at license agents or online.

Residents and nonresidents ages 16 and older are required to purchase a license in order to fish. Find out more at dnr.wisconsin.gov/topic/Fishing.

All are welcome to a wild game feed dinner Saturday, April 2, 5:30 pm, at St. John’s Lutheran Church, Highway 54 at Rankin, about three miles west of Algoma.

Attendees should take a favorite wild game dish, side dish or dessert. There will be door prizes and a guest speaker talking about local fishing, hunting and wildlife news. Interested? Email [email protected] or call 920.487.2005.

The Baileys Harbor Brown Trout Tournament, with fishing allowed on Green Bay and Lake Michigan off Door and Kewaunee counties, runs April 7-10. New this year, the event is offering daily port prizes as part of the more than $8,000 total in cash and prizes for the four-day event. Check out the tournament’s Facebook page, or visit baileysharbor.doorcounty.com.

The annual DNR spring fish and wildlife hearings and Wisconsin Conservation Congress county meetings are canceled for the third straight year, but citizens can still provide input on more than 60 questions.

A 72-hour voting period will begin April 11 at 7 pm. Results are advisory only, but they are often a good gauge of public opinion and sometimes lead to rule changes. Learn more at dnr.wisconsin.gov/about/wcc/springhearing.

The Blue Door Brown Trout Derby is set for Saturday, April 23. Up to five brown trout may be weighed by each team. There will be a cash and prize payout for the top four heaviest and single biggest brown trout. To get more details, stop at the Blue Door in Kewaunee; call Merrick Malach at 920.366.7706; or email [email protected].